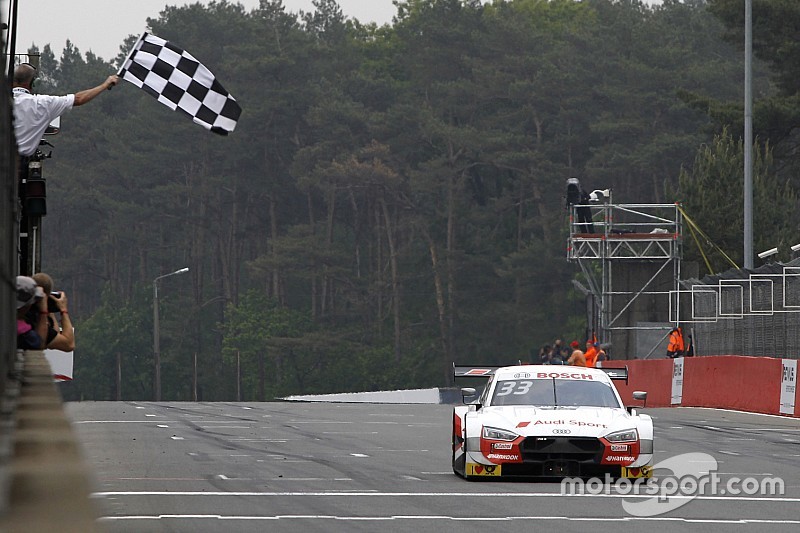 Audi's Rene Rast won the final race of the DTM Zolder weekend after rising above a chaotic battle for the podium places.

Rast, who retired on Saturday for the second time in three races, had to recover from a poor start in which Sheldon van der Linde kept pole position and Philipp Eng applied pressure on the Audi driver into the sweeping Turn 1 bend.

Eng's minor mistake at the right-hand Turn 4 released Rast to hunt van der Linde over the first stint, constantly rotating between backing off and applying pressure as he managed his tyres.

The new Class One engine puts a greater level of wear on the Hankook tyre, which remains unchanged from the 2018 specification, with tyre degradation seen as key to aiding overtaking on the narrow Zolder circuit.

Rast finally pulled off an overtake at Turn 1 on lap 11 of 39 before the BMW driver made his mandatory pitstop at the end of the tour.

Rast would come out on top in the pitstop battle but initially had to defend resolutely on cold tyres.

When the round of pitstops came to an end, Marco Wittmann hit the rear-left corner of Robin Frijns's Audi in the battle for fifth and spun his rival off track.

That necessitated a safety car period for five laps, with race control extending the race by five minutes-plus-one-lap to compensate, and Wittmann was hit with a drive-through penalty for the incident.

Rast held on to his lead following the IndyCar-style restart, making a minor error at the Villeneuve chicane along the way, but pulled clear to take his second victory of 2019.

Race 1 winner Eng was second after a storming drive that included a stunning move down the hill at Butte on Frijns and at the restart the BMW driver was able to slide past van der Linde to go second.

Jamie Green made the most of a two-stop strategy to rise through the field with fresh rubber and a dramatic final few laps sealed his podium place.

At the two-thirds distance, Green came out on top in a three-car pack through Turn 1 alongside BMW's Timo Glock and the R-Motorsport-run Aston Martin of Jake Dennis.

It took until the final lap for Green to finally overhaul van der Linde for third at Turn 4, with Mike Rockenfeller attempting to dive down the inside and running across the grass in the process.

The move was a failed bid for third, but Rockenfeller took fourth ahead of the BMW pole-sitter.

Dennis was an impressive sixth for R-Motorsport to give the Aston squad its best result of the 2019 season to date.

However, Paul di Resta did not start after his qualifying problem while Ferdinand Habsburg and Dani Juncadella were forced to retire during the race.

Eriksson played a part in a wild restart when both he and Loic Duval ran across the gravel at Turn 4, with the BMW driver recovering to register a points-paying position.

Marco Wittmann was the last of the classified finishers in 13th following his penalty, coming across the line after Duval and Jonathan Aberdein.

Glock was the last drive to retire, pulling into the pits one lap from the end with an unspecified problem.