SSR Performance team owner Stefan Schlund feels Porsche wasn’t balanced correctly against its rivals in the opening round of the 2022 DTM season at Portimao.

Porsche made its much-anticipated debut in the DTM last weekend, with SSR Performance and Team Bernhard 75 fielding a trio of 911 GT3 Rs between them at the Portuguese circuit.

But the German manufacturer's first DTM weekend as a full-time entrant got off to a poor start in Saturday qualifying, with Dennis Olsen the best of the three drivers in 19th place - seven tenths off the pace of polesitter and Lamborghini driver Mirko Bortolotti.

DTM's Balance of Performance partner AVL RACETECH quickly intervened after qualifying to hand Porsche a speed boost, with all three of its cars immediately receiving a 25kg weight reduction.

The BoP change played its role in uplifting Porsche's fortunes in the 32-lap race, with Olsen grabbing a strong haul of points in fifth and teammate Laurens Vanthoor finishing not too far behind in eighth.

Sunday's qualifying saw Vanthoor setting a time that was 0.416s down on Audi driver Nico Muller's pole lap, while in the race itself he finished seventh - as all six manufacturers were represented inside the top seven.

However, Schlund still wasn't completely satisfied with the BoP, calling for more changes to be made in the run-up to the second round at the Lausitzring later this month.

"We traveled to Portimao full of anticipation," said Schlund, whose team SSR Performance won the GT Masters title in 2020. "Unfortunately, we weren't ranked correctly in terms of BoP, which took away our chance of a podium. I see a need for action here for the next races.

"Nevertheless, I am satisfied. The team got along well and did a good job. We keep working and do our best to be perfectly positioned for the next rounds." 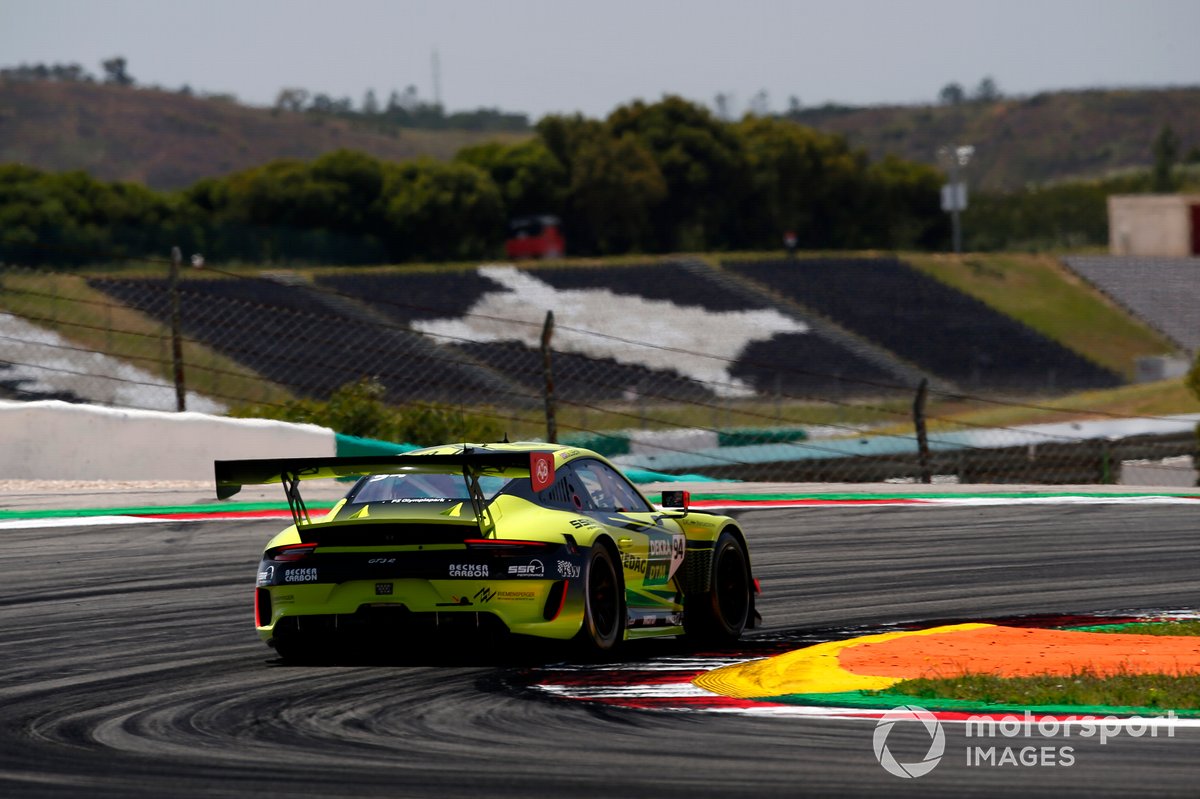 Balancing the performance of the Porsche 911 GT3 is particularly tough as it is the least powerful car on the grid, with its flat six-cylinder motor only capable of delivering 520bhp. It also appears that Porsche bluffed the least of any manufacturer during the BoP classification test, meaning others were able to find more time as the weekend progressed.

AVL RACETECH did make some BoP adjustments during the weekend, but several other manufacturers refrained from equipping their cars with air restrictors that hadn't been tested previously, accepting only additional weight as success ballast.

So while the Porsche did gain time over its rivals in corners, it was still lagging behind them in terms of top speeds, which particularly hurt drivers while battling for positions.

Vanthoor admitted that he had to give Sheldon van der Linde a nudge into Turn 1 in order to pass the BMW for seventh in the second race of the weekend.

Van der Linde topped the speed trap at Portimao after clocking 272km/h on the start/finish straight, while Vanthoor - who was the fastest Porsche - could only reach 261.5km/h on the same section of the track

"I gave him a quick nudge in the back. No, sorry, but that was the only way to get past him," Vanthoor told Motorsport.com's sister website Motorsport-Total.com

"We were on better tyres after Saturday. Even if you made up a lot [of time] coming out of the corners, he just drove away from you every time.

"We were better on the brakes, but not that much better now. We had to try that the hard way. He thought it was okay. It was going back and forth a bit before that.

"I said to Sheldon, 'sorry, but without touching you lightly, I would never have passed in my life'. He just laughed then too.

"It's very frustrating when you're trailing and there's nothing you can do. You try everything, but against engine power, it is the way it is. We are strong on the brakes."

Vanthoor refused to comment about the BoP situation at Portimao, but was confident that Porsche will soon be able to contend for its maiden victory in the DTM.

"The bottom line is that we're new to the DTM and we're learning every time we go out on track," he said. "We're also improving a lot. I expect us to be fighting for victory in a couple of weekends.

"As long as we don't get everything 1000 percent right, we don't need to grumble about anything else."

Vanthoor: Porsche treating DTM like any other customer programme