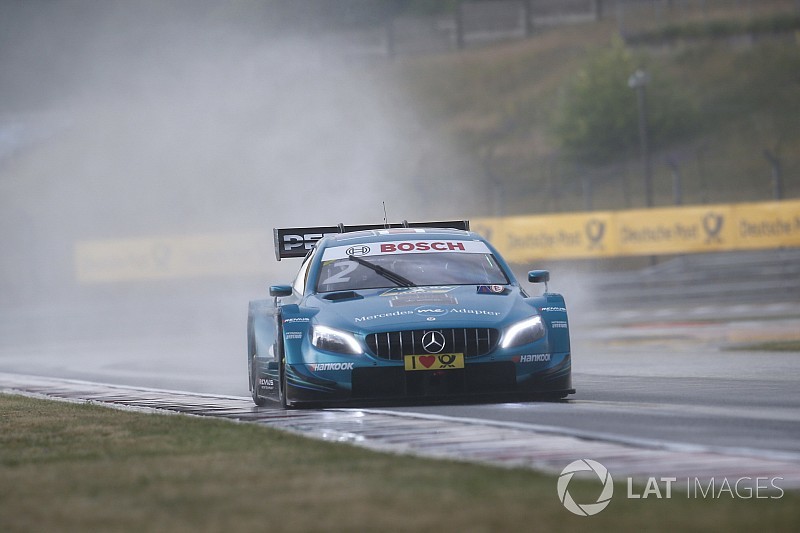 Mercedes driver Gary Paffett lashed out at how long it took for Sunday's Hungaroring race to be red-flagged, saying it was "disastrous" and the "most embarrassing DTM race I've been in".

Rain started falling shortly after the start of the race, with drivers gradually beginning to pit for wet tyres.

Fellow Mercedes driver Lucas Auer pitted on Lap 6 but conditions were too wet at that point and he was unable to stop at his slot. He ended up hitting the pit building, injuring marshals in the process.

With an ambulance car driving into the pitlane, the safety car was deployed.

However, five more drivers were just entering the pits as the safety car was out, one of them being Mercedes man Edoardo Mortara, who had another incident as he took down his own pit gantry.

And with another incident then occurring involving BMW's Bruno Spengler, the race was red-flagged.

Paffett criticised the decision to only red flag the race after all three incidents happened, saying Mortara's crash with the pit equipment "could have killed people".

When asked if the race should have been stopped after Auer's incident, Paffett said: "Should have been, absolutely, without a doubt. I mean already it was too bad, already a guy was injured then.

He continued: "The whole race was disastrous, it was the most embarrassing DTM race I've been in the last 15 years.

"Honestly don't know how you can let a race carry on with a guy with a broken leg in the pitlane. It is ridiculous.

"How can you have an ambulance parked in the pitlane and let people do pitstops on a surface that you already see is like ice? I don't understand it.

"As soon as you see one accident like that, you red flag the race immediately. You know people are gonna make pitstops because it is raining.

"When you see one thing like that happen, you stop the race, you don't let more come in. Edo hit the pit gantry and it could have killed people."

When reached for comment, a DMSB representative explained that the first crash of Auer didn't indicate a specific issue in the pitlane, and the safety car was deployed when the medical car went into the pits.

The race was then red-flagged when the further incidents occurred.

Paffett also slammed the decision not to give a penalty to title rival Timo Glock, who he made contact with after the red flag.

The Briton, at a disadvantage for still having to pit, was the sole driver to run on wet tyres at a mostly dried up Hungaroring, and started to lose ground after the race restart.

He was hit by Glock at Turn 4, the contact forcing Paffett to run wide.

"I don't understand why Timo didn't get a penalty for basically driving into me and pushing me off the track," said Paffett.

"Okay, I was on the wet tyres at that point, but he just drove me off the track from behind, so honestly [I] don't understand what you have to do to get a penalty in this series sometimes."

DMSB confirmed that the incident between Glock and Paffett had not been reported, which was why it was never investigated.