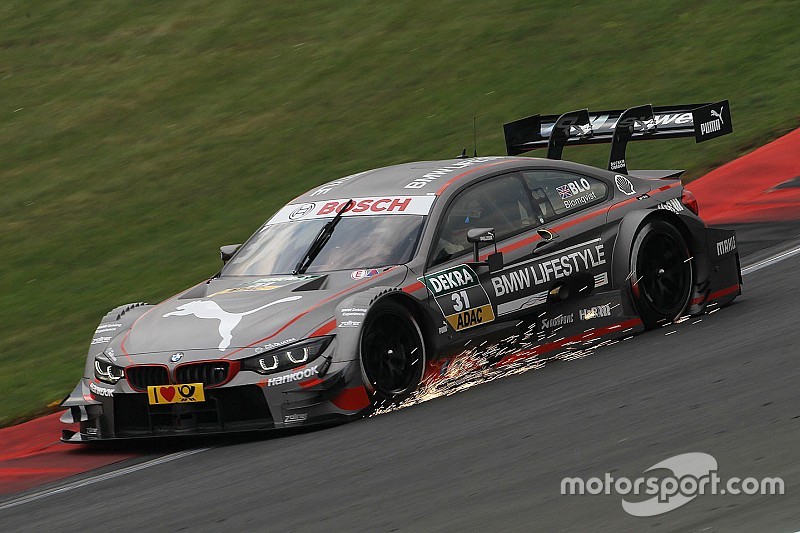 DTM rookie Tom Blomqvist won the second race at Oschersleben and led another 1-2-3-4 for BMW with championship leader Pascal Wehrlein finishing best of the rest in fifth position.

Blomqvist, son of rally legend Stig Blomqvist, took the lead at the start when he beat his BMW teammate and pole sitter Augusto Farfus in the sprint to the first corner.

Once in front, the 21-year-old Brit controlled the race to finish ahead of Farfus, Marco Wittmann and Antonio Felix da Costa after 40 laps. With that, Blomqvist scored his maiden DTM victory.

“Unbelievable. Words can’t describe it”, said Blomqvist after his first ever visit to the DTM podium. “We have to be very thankful and we have to celebrate good tonight.”

“A few things went against me at the beginning of the season. Now it’s back to normal again. Today, it was a matter of converting my second grid position in a fine result.”

The race was red-flagged following a heavy crash of Mercedes DTM rookie Lucas Auer after exactly one hour. The Austrian had left the track in the second but last corner and had smashed head-first into the tire barriers.

However, Auer seemed to be unharmed when he got out of his car by his own efforts.

Paul di Resta, Timo Glock, Maxime Martin and Bruno Spengler finished within the top 10 for Mercedes and BMW respectively. Jamie Green in eighth was the only Audi driver to take home points in the second race at Oschersleben.

A first corner incident had seen Audi drivers Nico Muller and Miguel Molina retire from the race immediately. The Safety Car was deployed for one lap while debris was cleared from the track. By then, Blomqvist was already on the road to victory.