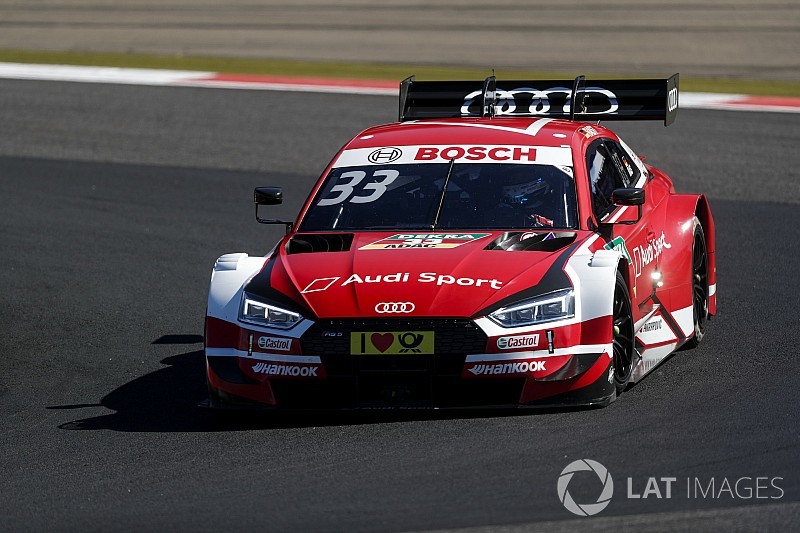 Defending DTM champion Rene Rast doubled up to make it a clean sweep of pole positions and race wins at the Nurburgring, as Gary Paffett's points lead took a hit after a poor pitstop.

Rast held the lead from pole after holding off Paffett, but he left space for an opportunistic dive down the outside from Lucas Auer, who rose from fifth on the grid to nose ahead before Rast cut him off at Turn 1's exit.

From there Rast pulled clear of Auer until a divebomb from Timo Glock at the hard-braking point of Turn 1's apex led to the BMW hitting the side of Auer and forcing him into a spin.

Glock was hit with a drive-through penalty as Auer plummeted through the field, allowing Paffett back into the role of Rast's main rival.

Paffett, who held the points lead coming into the race, suffered a slow pitstop that removed him from winning contention and down into the midfield.

That opened up a new battle for best of the rest, as Bruno Spengler eventually lost out to Paul di Resta in the second stint as the BMW grappled with cold tyres following his pitstop one lap after the Mercedes driver.

Now in free air, di Resta was able to close within five seconds of the unchallenged Rast to finish second.

Paffett's recovery drive could only reach as high as fifth place, dispatching Joel Eriksson, but running out of time to close on Spengler. The Mercedes driver's points lead over teammate di Resta is now just two points.

Phillipp Eng had started the race third on the grid after narrowly missing out on pole, but was shuffled back in the early part of the race and could only finish seventh.

Wehrlein came under investigation twice during his many battles in the midfield scrap.

He was first placed under scrutiny as he cut across the final chicane after a botched move on Nico Muller and was then given a warning for pushing the Audi driver off-track as he finally got the position. Muller would fall to 14th at the flag in a late collapse from the fringes of the top 10.

Audi's Robin Frijns was 10th after he again started near the rear of the field - this time 17th - and climbed up the order by virtue of a late pitstop, coming on lap 26 of 40.

Edoardo Mortara used a similar strategy to rise from 18th to 11th.

Loic Duval was 12th ahead of Mike Rockenfeller after the former created a train for sixth place before he spun and progressively fell down the order.

Jamie Green was 15th after a failed gamble of stopping on the first lap of the race to run a long second stint.

Auer would retire late from the race, joined by Dani Juncadella after the Mercedes driver ran wide at Turn 7 and onto the grass.