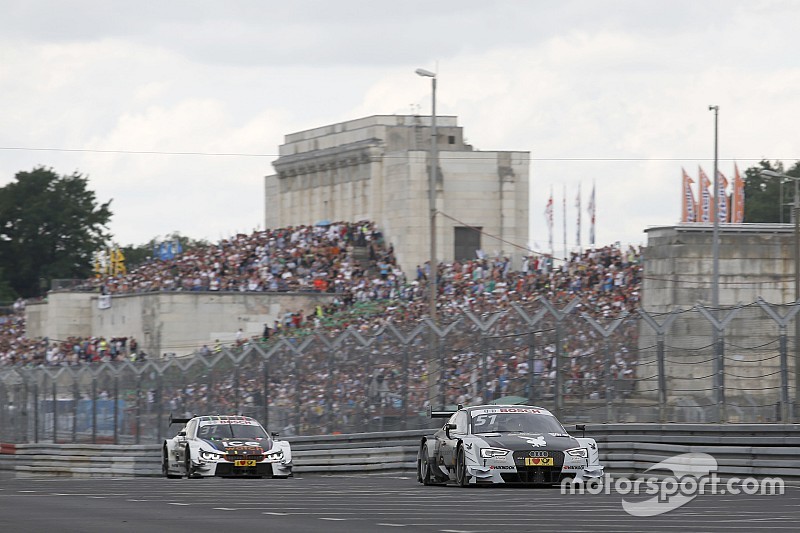 Nico Muller took his first victory of the season in DTM's second race at the Norisring after beating pole-sitter Blomqvist with a better pit stop strategy.

Blomqvist, who started on pole after qualifying pace-setter Mattias Ekstrom received a penalty for causing a collision in yesterday's race, led the field off the line.

The Swede started fourth on the grid but damaged his car by nudging Paul di Resta at Turn 1 and pulled into the pits at the end of the opening lap.

After a short safety car stint caused by debris, Blomqvist controlled the restart to lead by a second over the course of a lap.

Muller, who passed di Resta after the start, was the only one keeping up with the sophomore BMW driver before the pitstops kicked off.

Di Resta on the other hand fell three seconds behind, closely followed by Lucas Auer and Maxime Martin.

Di Resta and Martin were the only frontrunners to pit early, giving Auer third place, and the Austrian, without Di Resta in front of him, quickly made up ground on the leading duo.

However, just as he was close enough to overtake, he went into the pits instead and a slow stop put him out of contention for the win.

Blomqvist quickly followed him next time around and rejoined in the provisional lead with Martin Tomczyk, di Resta and Martin all ahead of Auer.

However, Muller stayed out for further nine laps and emerged just ahead of Blomqvist.

The Audi driver built a lead of around two seconds with the duo comfortably holding first and second. only for it to be ruined by the safety car going on track.

The neutralisation was caused by Antonio Felix da Costa, who suffered three incidents during the race: first hitting Adrien Tambay at Turn 1 and then being turned around by Christian Vietoris, he made contact with Daniel Juncadella, leaving a lot of debris.

Muller nailed the restart, not giving Blomqvist a chance for an overtake, and, with just three minutes left, he cruised to the finish.

Blomqvist and Martin both took their second podium finishes of their respectively campaigns, followed by di Resta.

The Scotsman had to keep Auer at bay, who in turn was forced to defend from Marco Wittmann.

Zandvoort DTM: Wickens sees off Wittmann and Vietoris for pole