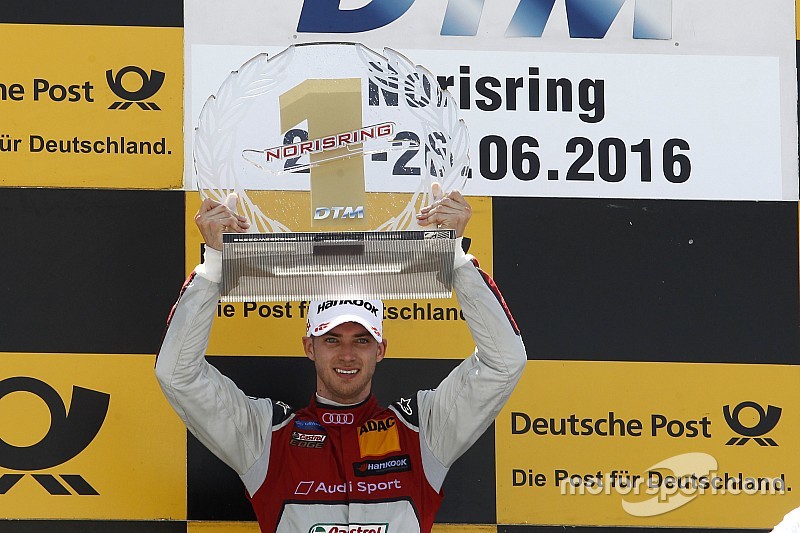 Edoardo Mortara became the first repeat winner of the 2016 DTM season after securing the win in Race 1 at Norisring, following contact among the early race leaders.

Christian Vietoris, starting from pole, had a good launch off the line and took the race lead into Turn 1, closely followed by a group of drivers that was initially headed by Mattias Ekstrom.

However, the Swede ended up losing a spot when he made a small mistake at Turn 1 and ran wide just enough to allow Robert Wickens through.

Wickens did not challenge for the lead for the rest of the race's first half before an incident was triggered that removed the top three out of contention.

Ekstrom, trying to pass Wickens into Turn 1, touched the Canadian and then went straight on into Vietoris, sending the German into a spin and taking both himself and Wickens out of the race.

The lead was inherited by fourth-placed Edoardo Mortara, who held off Jamie Green and Paul di Resta after the safety car restart.

The British duo kept up with Mortara throughout the rest of the race with Green putting increasing pressure on his stablemate during the final minutes.

However, Mortara did not put a foot wrong and took the chequered flag first.

Marco Wittmann ended up as the lead BMW in fourth after an overtake on Bruno Spengler, as Maxime Martin took sixth.

Both the Belgian and Adrien Tambay passed Vietoris, the early race leader having to settle for eighth.

The Mercedes of Maximilian Gotz and BMW of Antonio Felix da Costa completed the top 10.