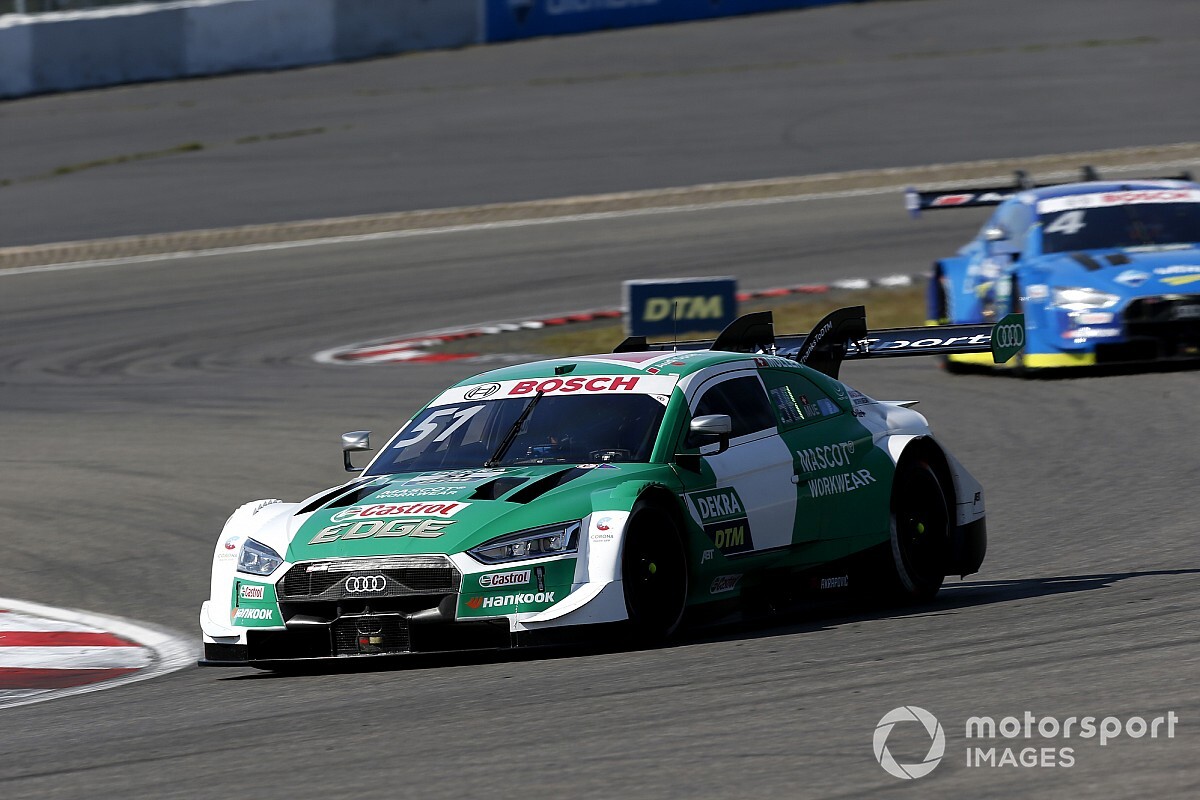 Audi driver Nico Muller has revealed he was losing as much as 70bhp due to a technical issue after dropping from first to fifth in the second DTM race at the Nurburgring on Sunday.

Championship leader Muller had looked favourite to claim his fifth victory of the season until the pitstop cycles, having qualified on pole and converting that into a comfortable lead over second-placed Robin Frijns.

But the 28-year-old simply couldn’t replicate the same pace in his second stint and started slipping down the order, eventually crossing the line fifth, just four tenths clear of the top BMW of Sheldon van der Linde.

While the Abt Audi team is still trying to diagnose the issue that cost him a likely victory, Muller said a sensor detected increased temperatures in the air intake, causing it to cut engine power to prioritise reliability.

This meant he was losing as much as one second per lap, allowing title rivals Frijns and Rene Rast - as well as fellow Audi driver Loic Duval - to overtake him and demote him to his joint-worst finish position of the season.

"The temperature sensor has probably given up the ghost," Muller told German TV network Sat.1. "Then the motor goes into safety mode if it reads too high temperatures.

“To prevent the engine from going up, it reduces power, because we have to drive all year round with this engine. You can't afford to have it blow up."

Elaborating further post-race he added: “Having the first look at the data, it was clearly the case already from lap 5 on. There was a gradual increase of power loss throughout the rest of the race. So after my pitstop I immediately felt it and there I thing it was getting worse and worse.

“It was a lot of power. We checked the data, in some laps it was close to 70bhp. So this is a lot. In some laps we lost up to one second. It was a huge problem.

“I was very worried to not finish the race because the throttle pick up was so bad. The noises in the car were so different and obviously on top of that you have no power, the temperatures are not where they should be.”

Muller was the dominant force on the DTM’s first visit to the grand prix layout of the Nurburgring since 2004, and would have bagged a perfect score of 56 points had he won the second race on Sunday.

The Swiss driver had taken pole positions in both qualifying sessions and won Saturday’s race with over 15 seconds in hand, the second-biggest winning margin of the season so far.

“I think the car was great today, especially in the second stint when I would have loved to have a bit of showdown with Robin at the end,” he said.

“I don’t think it would have been a walk in the park like yesterday, but I’m very convinced that I would have all it takes to fight for the win.

“With the way DRS works this year I don’t think today I would have managed to pull away but I’m sure Robin’s life would not have been as easy as it was in the end.

“It was nearly the perfect weekend. I’m not bluffing if I say that I was probably the quickest car in every session. Then you also want to score those 56 points and we didn’t manage, it was not in our hands today.”