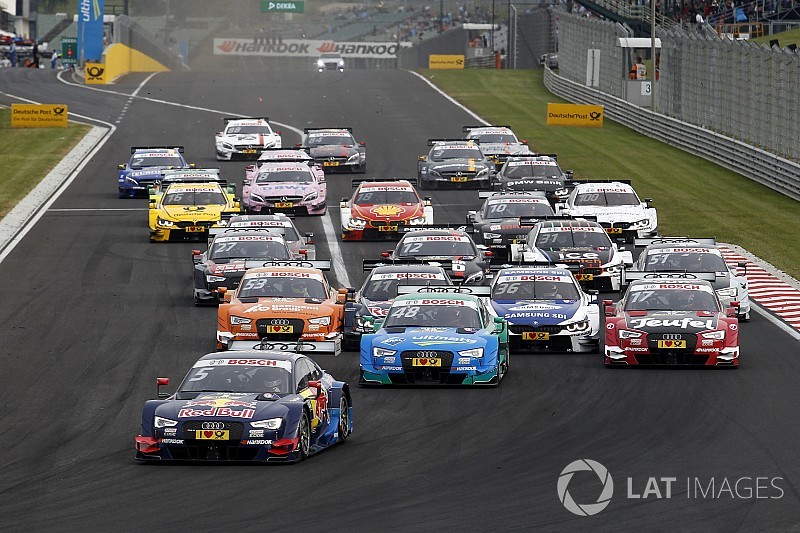 Featuring action aplenty, some big names bowing out of the series and a title fight that went down to the wire, the 2016 DTM season will live long in the memory. Our international panel pick their 10 standout perfomers of the year.

SE: If there was a prize for the most bad luck of the year, that award most likely would go to Vietoris. On several occasions he was on the verge of scoring a win or heavy points but got taken out (Norisring) or suffered technical issues (Zandvoort). P14 doesn't reflect his true speed in 2016.

ER: Replacing Esteban Ocon from Moscow onwards in the ART Grand Prix Mercedes, the Swede was immediately impressive at the wheel of the C63, scoring his first point in very difficult conditions in his first race in Russia and adding to his tally at Budapest.

VK: The only driver in the top 14 without a victory or a runner-up finish, Martin made up for a lack of headline-grabbing results by being very reliable, his tally of 13 points-scoring finishes second only to Wittmann. Still, only in one qualifying session – at a damp Moscow Raceway – was the Belgian the the top BMW, meaning he has to take another step to become a true frontrunner. 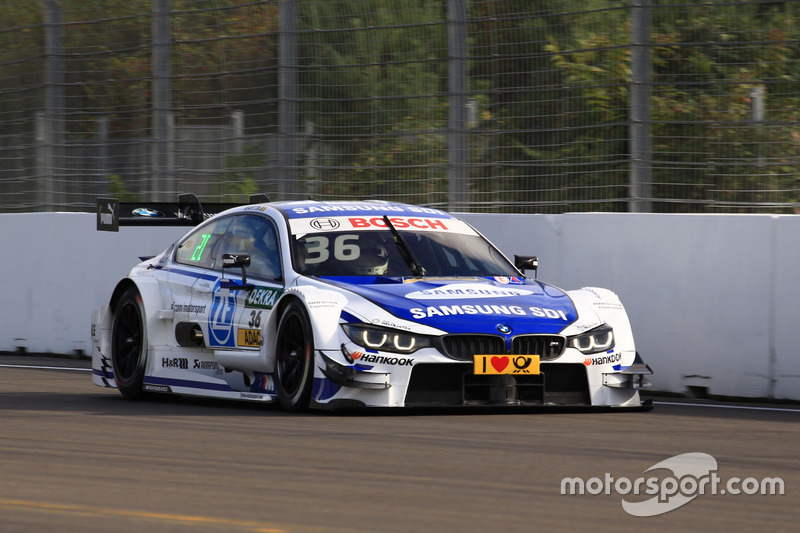 JK: The year started on a sour note for the ex-Toyota and Marussia F1 man, as he was disqualified from second at Hockenheim, but he made up for this with a win in Austria and proceeded to score everywhere thereafter – besides Moscow, where he was spun out by di Resta.

DG: After two years outside of it, Glock was finally back in the top 10 of the standings this year, even though he lost a second place due to a technical disqualification and retired a couple of times due to no fault of his. Still, he lacked the pace of BMW teammate Wittmann, so he still needs to improve. 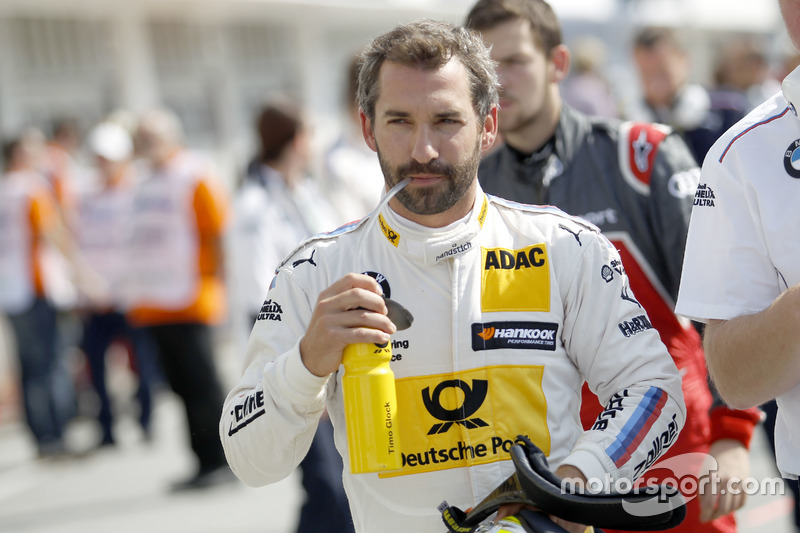 SE: A DTM star in the making, according to many in the paddock, Muller scored his very first win this season and certainly raised his game overall. There's still room for improvement, but watch this guy!

VK: A promising-looking campaign faded as it went on, but left little doubt that Muller is continuing to get better as a DTM driver. His maiden win at the Norisring against Blomqvist did require an alternate strategy – which Audi seems to be pretty great with – but it was still a superb piece of driving.

DG: Who thought Muller's weak point would have been qualifying after he took pole for the first race of the season? Yet, that's precisely what happened, as he was only higher than ninth twice for the rest of 2016. Still, he showcased his race pace as, alongside Maxime Martin, he made it to the points starting from the outside of top 10 the most times. 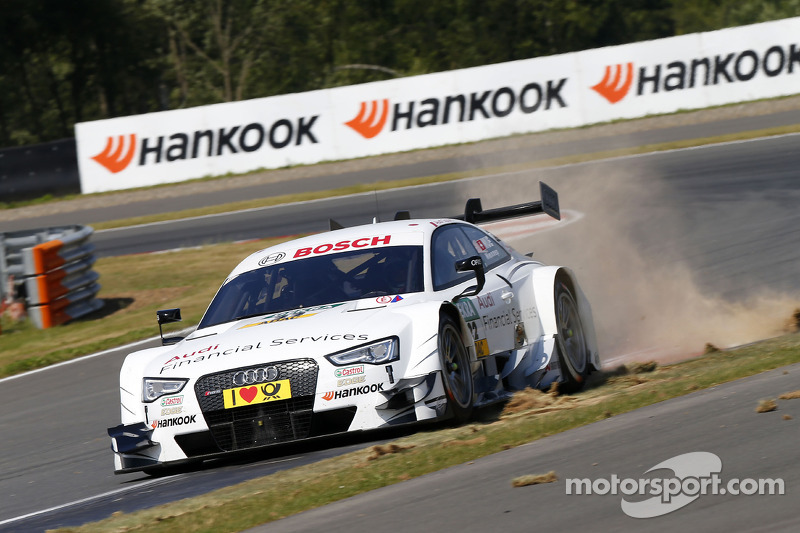 SE: Auer managed to hit the sweet spot just right at Lausitz and at the Nurburgring, achieving his first DTM victory and picking up a second-place finish. He had a somewhat difficult start to his DTM career, but kept his head down in his second season to show real progress.

VK: Auer and Mucke teammate Vietoris delivered an entertaining intra-team battle throughout the campaign, and while the latter was dogged by torrid luck, sophomore Auer was just about more impressive, his two poles and one victory showing an abundance of raw talent.

DG: In his second year in DTM, Auer was among the strongest qualifiers in the field, topping three sessions, and converted one of his poles into a win and another into a second place. While the beginning and end of his campaign was quiet, he was, for the most part, a consistent points-scorer. 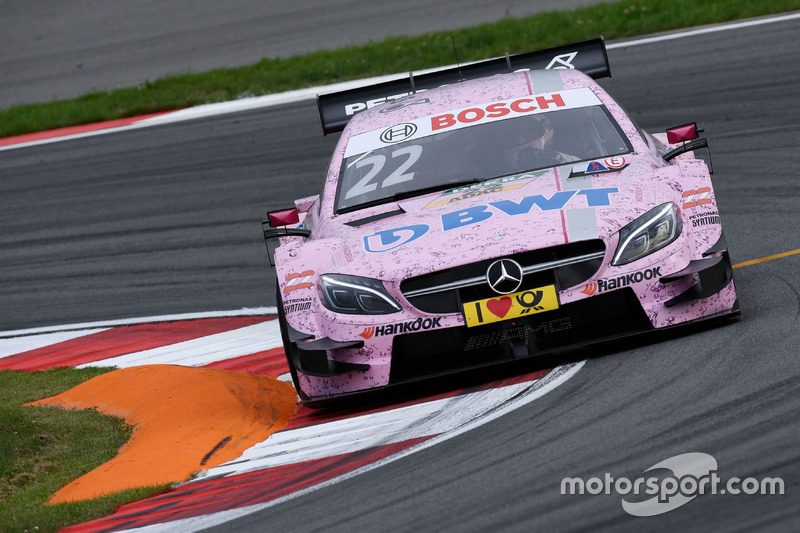 JK: Four trips to the podium, including victory at Hockenheim, certainly marks another decent campaign from the 30-year-old Scot. But his qualifying pace was lacking compared to his teammates, even if this didn’t end up making too large a dent in a points haul good enough for fifth overall.

VK: Di Resta's results are still pretty far from his pre-F1 DTM glory days, yet he was just eight points off the lead Mercedes in the standings. He certainly has the race pace, but he needs to sort his qualifying, which, a couple of solid outings aside, fell off a cliff in the second part of the campaign.

ER: The championship leader after the first two rounds, but from that point di Resta's performances were more disappointing and he never found his way back into the title race, although he concluded with a strong podium finish in Hockenheim. 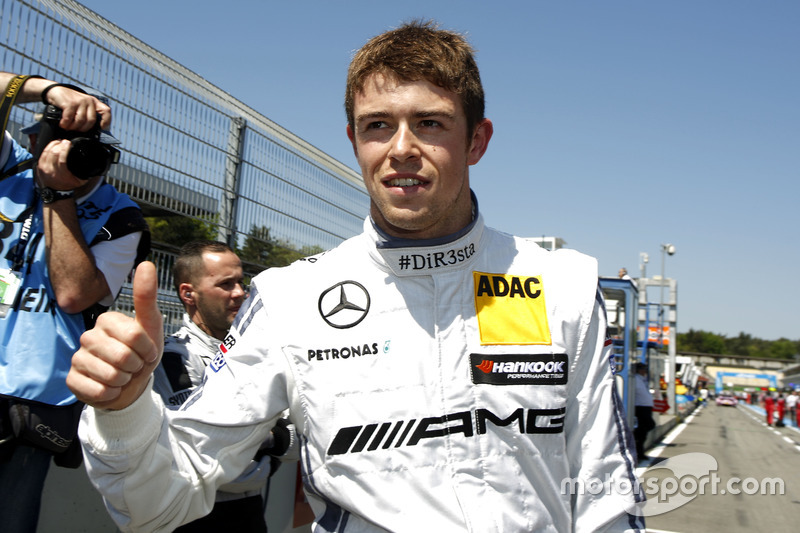 JK: With Ekstrom skipping the last round to go and seal championship honours in World Rallycross, it was fitting that the Swede took the top step on the podium in the final race of another remarkably solid campaign – his 10th in a row that he has been seventh or better in the standings.

SE: After more than 15 years in DTM, he still has got what it takes to show the young guns. Ekstrom certainly is a force, which he showed not only in DTM but also in Rallycross, where he won the world title – even though DTM was his number one priority for most of the season. Great stuff!

VK: The Norisring weekend – where he crashed into Wickens and Vietoris on Saturday and into di Resta on Sunday – was an obvious low point for the aggressive Swede, but around it came a solid campaign, in which Ekstrom seemed to particularly excel in the pitstop races. A couple of DTM veterans have bowed out this year, but Audi would do well to ensure 'Eki' sticks around a while longer. 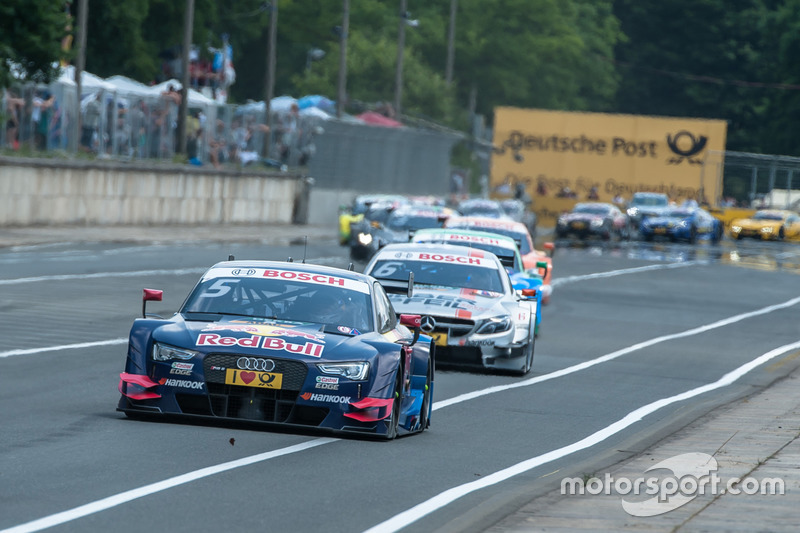 JK: In his sophomore year as a DTM driver, Blomqvist flourished into a remarkably well-rounded and consistent performer, even without adding to his win tally. He was often the second-best of the BMW stable behind a rampant Wittmann and ahead of several more experienced campaigners.

VK: Blomqvist clearly had speed throughout the season, but by the time he was delivering it consistently, the focus was already on Wittmann. The Anglo-Swede not only did a diligent job in helping his stablemate to the title, but established himself as one of BMW's leading men for the future.

DG: Only occasionally at the front in the first half of the season, but Blomqvist's consistency significantly improved later in the year. Six times in the top three in qualifying, four times second in a race, but first place eluded him. If he continues his rate of progression, he will surely become a title contender in 2017. 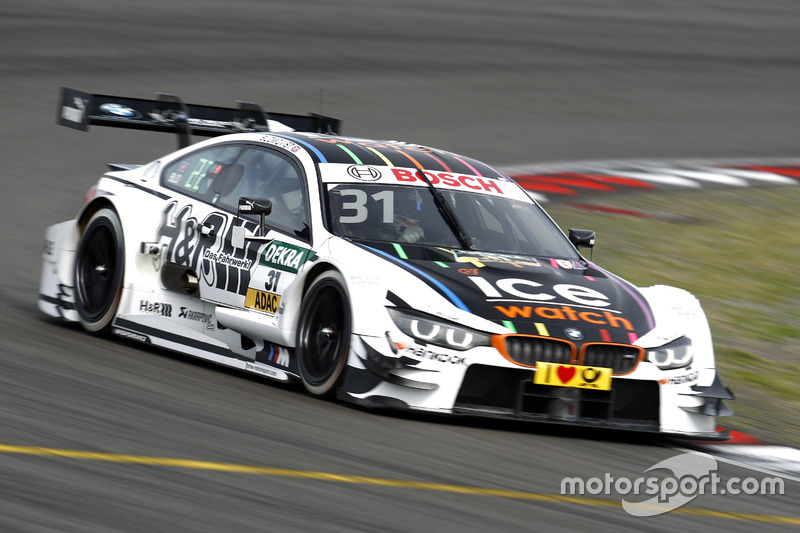 JK: In a year to forget for Mercedes, Wickens took up the mantle of the three-pointed star’s de facto leader admirably, dominating the first race at Zandvoort and adding a second in at Moscow before his title challenge melted away in the final three rounds.

SE: When his Mercedes was up to speed, Wickens was a force to be reckoned with. But contrary to Wittmann, for example, he lacked consistency when the car wasn't at its best. Either he scored double-digit points or basically not at all, which is not enough to mount a title charge.

VK: Wickens' 2016 run was not mistake-free by any means, and even if he had been spared the Norisring collision with Ekstrom and the Zandvoort tyre failure, it might not have been enough. Still, he was Mercedes' best driver all-round, and has unquestionably returned to being among DTM's finest. 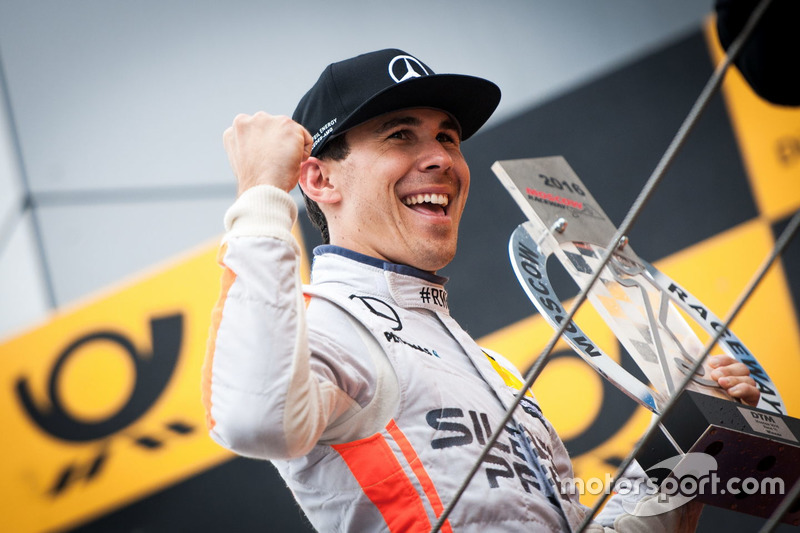 JK : Ultimately, Green will look back at the two Hockenheim rounds – where he came away with just eight points in total – as the thing that undid his title challenge. But in between, the Brit again proved he remains a match for anyone else in this series more than a decade on from his debut.

VK: A strong case can be made for Green being DTM's outright quickest driver of the past two seasons – but while his 2015 campaign was undone by inconsistency, the problem this year was a slow-ish start and a couple of unforced errors. Still, following Mortara's exit, there's little doubt Green will be Audi's main title hope in the near future.

DG: The Audi driver able to match Mortara most of the time was Green. However, just like last year, 2016 was certainly a missed opportunity for the Briton. He was involved in way too many incidents - sometimes caused by himself - and, without those, he would have had a chance until the very end. 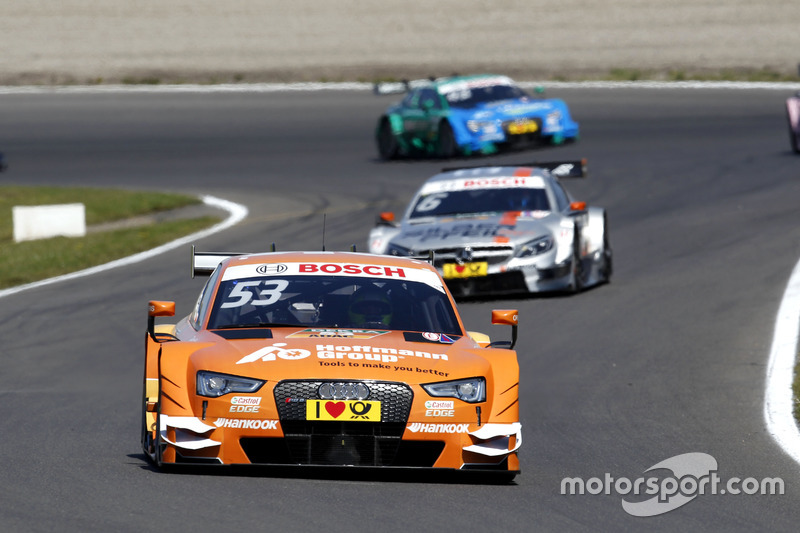 JK: Perhaps he lacked the consistency of Wittmann, but Mortara scored five wins (two more than the German) and lit up Hockenheim when it mattered most. Plus, the Italian can feel aggrieved to have effectively lost the title because of a mistake by the stewards. Audi will feel his loss in 2017.

SE: With five victories to his name, Mortara won more times than any other DTM driver this year. But a stupid mistake at Spielberg (and a misjudged call by race control at Zandvoort) cost him dearly. His aggressive and risky driving style was fun to watch, but it didn't pay off in the end.

VK: Was Mortara right to say “we're the only ones who deserve this championship” in the penultimate race? It's debatable, as even he himself seemed to disagree after the finale. But it's tough to accept that a spectacular campaign, one that built momentum throughout and culminated in a dazzling Hockenheim weekend masterclass, was only enough for runner-up.

DG: Mortara's racecraft has been arguably the strongest this year. Only two races were won by a driver not starting on the first two rows of the grid, and on both of these occasions it was Mortara who triumphed. What cost him the title was not so much down to him not doing something well enough; it was mainly because of his opponent's extraordinary season.

ER: Maybe the fastest man in the field, Mortara was unlucky to lose some important points when he was penalised in Zandvoort following a mistake by the marshals. But he made two big mistakes this season: first when he crashed out with Da Costa at the Red Bull Ring in a "revenge move", and then when he cracked under pressure at the start of race 2 in Budapest. 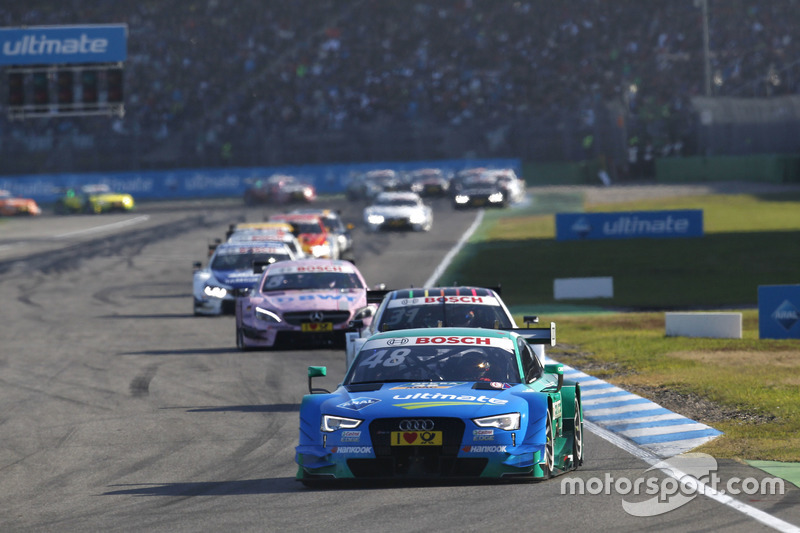 JK: The dominant force in BMW’s line-up and on average the best qualifier of the season, Wittmann makes a more than worthy two-time champion and would have arrived at Hockenheim in an even more comfortable position without his disqualification from race two in Hungary.

SE: Consistency is key to success, and this is exactly what Wittmann showed in 2016. He scored in all but three races and didn't make any mistakes. A very deserved title.

VK: In a series where the frontrunners seem to change every weekend and a tenth usually means the difference between first and fourth on the grid, two titles in four years is a monumental achievement. Wittmann quickly left BMW no choice in picking its main contender in 2016 – no matter how competitive its cars were on a given weekend, he was always most likely to lead the charge.

DG: The new weight distribution system made it inevitable for every manufacturer and driver to have helpless days - but not Wittmann. He only qualified and finished outside of the top 10 twice, and it's this level of mega-consistency is what earned him a very much deserved title.

ER: Strong and consistent, Wittmann always seemed to have everything under control this season to clinch his second DTM title. He kept his cool even during difficult circumstances, including his disqualification from the second race at Budapest. Always there at the right moment. 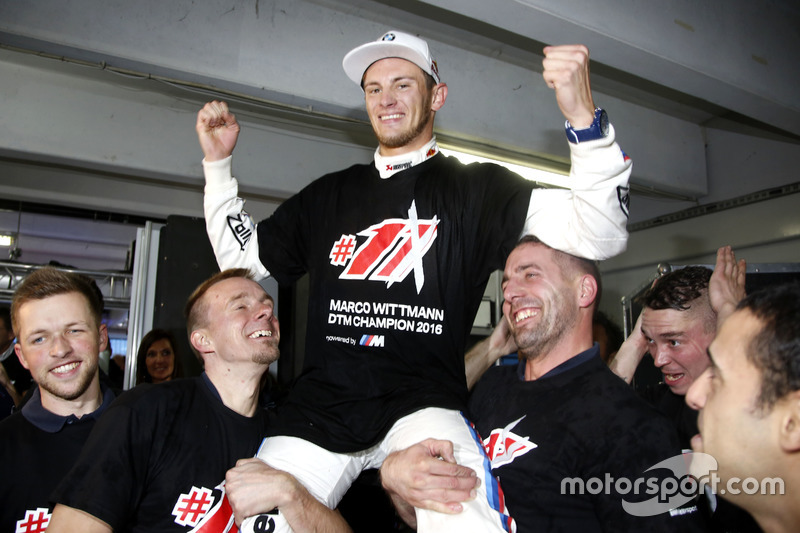 Mortara leaves Audi for Mercedes for 2017