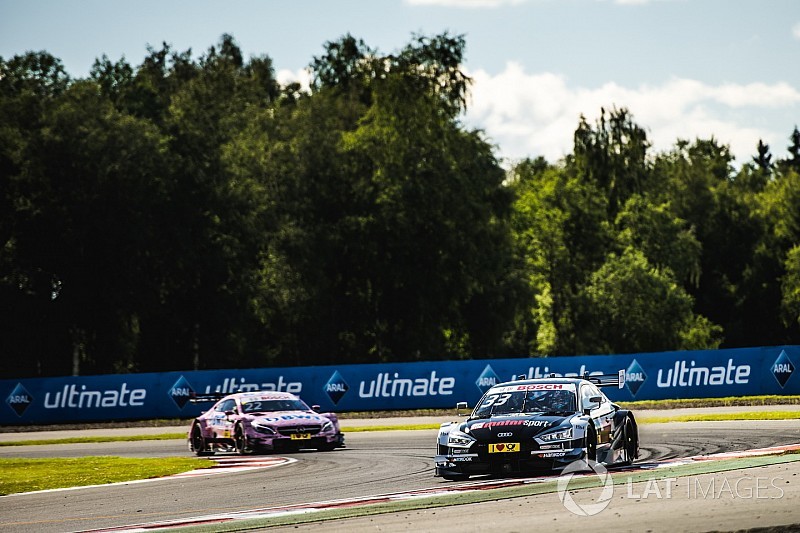 DTM rookie Rene Rast scored his second win in the series in the Saturday race at Moscow Raceway, leading stablemate Mike Rockenfeller for an Audi 1-2.

Rast led the race from lights to flag, but his win was not necessarily straightforward, as Rockenfeller was ever-present in his wheeltracks in the final laps of the event.

At the start of the race, Rockenfeller – nursing a fracture in his left foot – had a look down the inside of Rast for the lead, but backed down from the move, maintaining the status quo out front.

With Rast soon establishing a minor lead, Rockenfeller had to switch focus on the BMW of Augusto Farfus behind him, and a second-lap attack by the latter resulted in contact.

Approaching the second corner, Farfus was blocked by Rockenfeller and forced on the grass while attempting to overtake. The move did briefly get him past the Audi man, but not without contact – which subsequently yielded a right-front puncture for Farfus and took him out of contention.

Rockenfeller received a warning, but himself and Rast were now in the clear, and the gap between them stood at around a second and a half for much of the opening stint.

With taking the mandatory stop early proving a popular strategy, Rockenfeller and Rast were among the last to pit – on laps 14 and 15 respectively. And while Rast was getting his tyres up to temperature after pitting, his Audi stablemate closed the gap to under a second.

At one point, Rockenfeller, who was using DRS on nearly every lap, was just half a second behind Rast, but a full-on attack did not materialise and he eventually finished 0.7s behind.

Behind the pair, the battle for the final spot on the podium initially looked to be an all-BMW affair, with reigning champion Wittmann moving up to third after Farfus' misfortune.

Fellow BMW man Glock got past Wittmann on lap 11, but the latter went on to pit a lap earlier than the ex-F1 driver and retook position after the stop.

This, however, played into the hands of Mercedes driver Robert Wickens. The Canadian managed to jump from 12th to fifth early on, having run wide at the start after contact, and then stopped late to rejoin ahead of both Glock and Wittmann.

He was passed by Wittmann while getting his tyres up to temperature, but managed to keep Glock at bay – and then overtook the reigning champion down the inside of Turn 1 on lap 21.

However, Wittmann had the pace on the Canadian in the end, getting a good run out of the final corner and picking off Wickens for good with six minutes left on the clock.

Wickens settled for fourth, ahead of Glock and Mercedes duo Lucas Auer and Gary Paffett.

Mattias Ekstrom, who had come into the race leading the championship, was nudged wide by Glock on the opening lap, dropping out of the top 10.

An early-stop strategy brought him back into the fight for points and he was even ahead of Auer after stopping.

But the Mercedes man soon got past and, baulked by Auer into Turn 1, Ekstrom was picked off by Jamie Green and Paffett.

Ekstrom subsequently overtook Green for eighth but lost out to Paffett in a photo-finish for seventh place.

With the Saturday Moscow race marking the exact halfway point in the championship, Rast has now vaulted back ahead on 99 points, with Auer four and Ekstrom six adrift respectively.