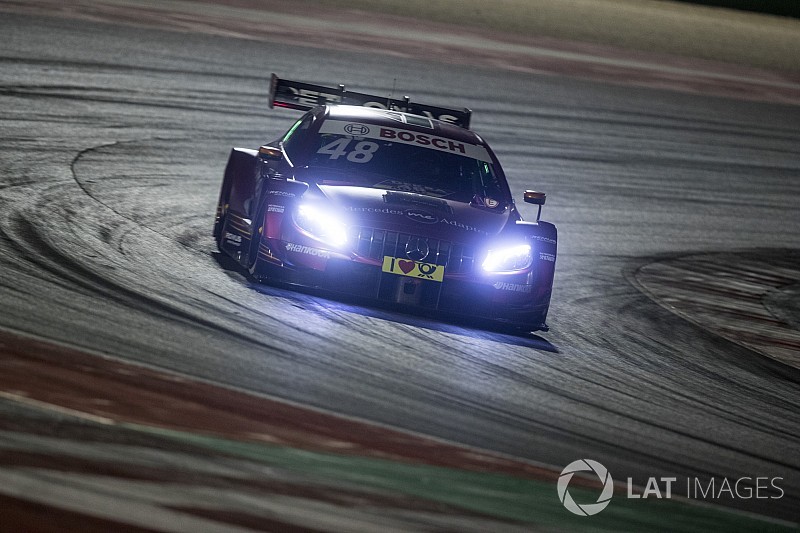 Edoardo Mortara admits he "feels bad" for colliding with Mercedes stablemate Gary Paffett in the Saturday DTM race at Misano, which led to the erstwhile championship leader's retirement.

Paffett and Mortara were second and third early in the race, the first in DTM history to be held at night, with the Italian completing his mandatory pitstop earlier.

When the Briton also changed tyres, Mortara came close to making a move on him, but he ran wide at Turn 8 instead, and small contact was made between the two.

Drama ensued a lap later when Paffett locked up his tyres and went deep into the corner.

With Mortara being attacked by BMW driver Philipp Eng, he also ran wide and was sandwiched between the two other drivers, hitting Paffett, who retired on the spot.

"I had to overcome quite a lot of issues during this race. The contact with Gary... maybe [made it] more difficult than actually could have been," reflected Mortara.

"The big squeeze with Gary and Philipp, I was in the middle, couldn't really do anything... that was s*** if I can say, that was s***. There are no other words, I felt bad because he had to retire.

"The last thing I wanted to Gary to retire, we've been teammates also in Spa [24 Hours], I like the guy so I felt bad.

"Obviously I had half of the car missing [after] and with these cars the aero is pretty important so that was not ideal."

However Paffett, who lost 25 points to the victorious Paul di Resta on Saturday, said he cleared things up with Mortara.

"I'm not dwelling on what happened yesterday, it happened and we don't like to apportion blame here or there. It is just the case of having a discussion about it which we did and moving on and trying again today."

Paffett also failed to score points on Sunday as he finished only 14th, being one of several drivers who had to make an extra pitstop due to rain emerging, as well as because of a hit by Daniel Juncadella.

"Our goal was to score points, but we threw our chances overboard ourselves," he conceded. "We made it hard on ourselves.

"The car didn't make it hard for us, because it was good. I drove quite well and the car was good both in the dry and in the wet.

"Unfortunately, some things went wrong in this race. We need to see what decisions we've made. There was a little luck with that, yeah. But it wasn't the first race for us in which it starts raining in the middle."

Di Resta, who is chasing his second DTM title since he won in 2010, commented: "All in all, what counts is that I took the lead in the championship six races before the end of the season.

"Overall, there are some mixed feelings, but I see the positives. Hopefully it will go just as well next time, because my car worked perfectly in all conditions."

Audi: Third marque a must for DTM stay post-2019