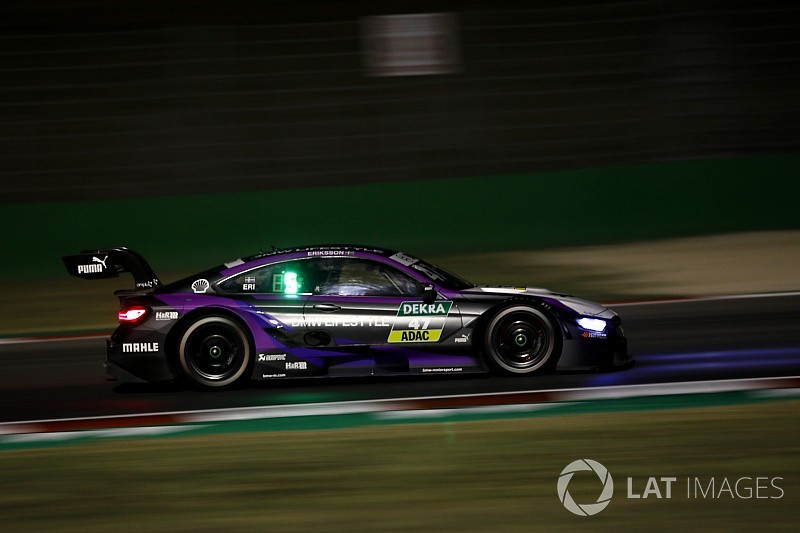 BMW rookie Joel Eriksson won the second DTM night race at Misano in bizarre fashion, as a sudden rainshower put all but five drivers a lap down for most of the race.

While rain had ceased shortly before the start, the track was universally thought to be too wet for slicks - with Eriksson the only one to gamble on dry tyres.

His decision did not seem to have worked out as he lost several seconds per lap in the early stages, but the track was drying quick and most of the field completed their mandatory stops soon.

However, just as Eriksson's pace started to match that of those still on wets, it suddenly started to rain again.

That paid dividends for the four drivers who were yet to pit - Edoardo Mortara, who led off the line as pole-sitter Loic Duval bogged down, Rene Rast, Robin Frijns and Alex Zanardi.

The rest of the field had to crawl around the wet track on slicks to pit once more, which was enough time for Mortara to lap all of them but Eriksson, whose stop was his first and only.

And, when the safety car was subsequently out due to Lucas Auer crashing at Turn 15, all of Eriksson's deficit was gone as he was now running behind the top four.

After the restart, the leading quartet all fell behind Eriksson as they pitted and, although the Swede gave up a nearly 20-second gap, he held on to win by 1.8s.

Mortara and Rast completed the podium while Frijns, who was last to pit on the penultimate lap, took fourth.

BMW wildcard Zanardi impressively made it home in fifth, albeit only 12 seconds ahead of Paul di Resta, who was best of the rest.

The Scotsman earned the place after a move on Duval, and took the championship lead from Gary Paffett.

Paffett was running 14th after the safety car restart but what hopes he still harboured of scoring points were dashed when he was sent into a spin by Daniel Juncadella.

It was the second time in two races Paffett was hit by a fellow Mercedes driver, as he was put out of contention by Mortara on Saturday.

Paffett eventually recovered to 14th, but Di Resta's sixth place meant he is now nine points ahead of his Mercedes stablemate in the standings.

Juncadella was second early on but lost out massively when he spun at pit entry while driving on slicks in the rain, and eventually finished a lap down after his collision with Paffett.