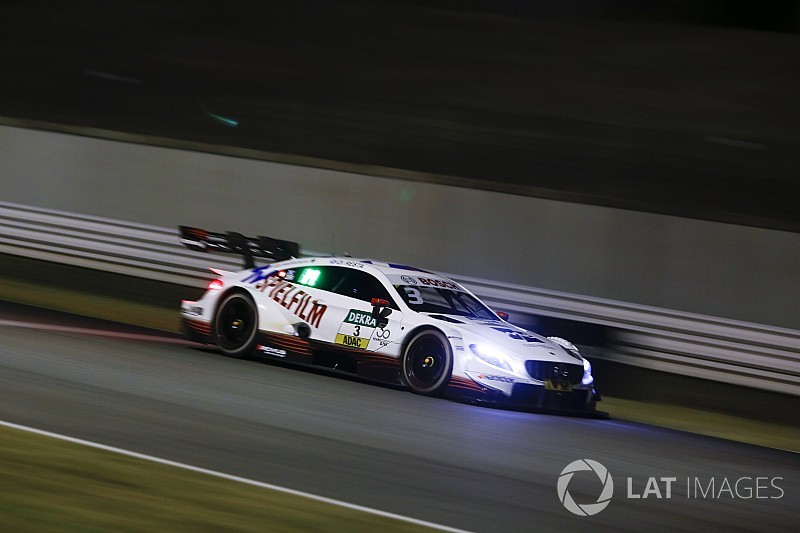 Paul Di Resta won a chaotic first-ever DTM night race at Misano, as Gary Paffett lost most of his points lead after contact with Edoardo Mortara.

Di Resta started the weekend 29 points behind Paffett but took maximum points by claiming both pole position and victory, and is now just one adrift in the standings.

The Scotsman had a sluggish start from pole and his lead was threatened by both Mortara and Paffett, but he held on the outside line of Turn 1 and stayed ahead.

The duo changes tyres at the same time on lap seven, and Paffett narrowly managed to keep Mortara, who was on hotter tyres, at bay when he rejoined.

However, a lap later Paffett locked up his tyres at Turn 8 and had to take the left-hander on the outside line, only to be hit by Mortara regardless, as the Italian was busy defending from Philipp Eng and ran wide on his own.

Paffett retired on the spot and the safety car was out with Daniel Juncadella, Augusto Farfus - the two drivers yet to pit - sat ahead of Di Resta and Eng.

On the restart, Eng quickly gained two places as Juncadella ran wide and Di Resta fell behind the Austrian, but safety car was soon out again due to two separate incidents - one involving Audi teammates Rene Rast and Jamie Green, and another between Bruno Spengler and Lucas Auer.

It was Eng's turn to have a bad restart this time around and he was back behind Di Resta, only for the Scotsman to run wide at Turn 8, handing second place, which soon became the lead, to Eng.

Eng, who started 18th and was the first driver to pit while running 15th, looked comfortable initially as he built a 2.6s lead over Di Resta.

But with about 10 minutes left on the clock, Di Resta, followed by Mercedes stablemate Mortara, rapidly closed in on Eng.

Di Resta eventually made a move at Turn 9 with Mortara forcibly following through at the same corner, and putting pressure on the former F1 driver.

However, Mortara couldn't overtake and had to even defend from the charging Robin Frijns - the Dutchman running ninth after the second restart and then dropping as low as 12th before he began an impressive recovery.

Frijns had carved his way through the field and after an unsuccessful move on Mortara at Turn 8 on the final lap, he forced the Italian into a mistake at Carro and claimed second place, his first podium in the DTM.

Mortara had to settle for third followed by Audi duo Loic Duval and Nico Muller.

Pascal Wehrlein was sixth with Timo Glock becoming the top BMW in seventh, as Eng faded to eighth.

Marco Wittmann dropped to last place early on after being sent into a spin by Frijns, but recovered to ninth followed by Mike Rockenfeller.

Late-pitter Farfus was 11th, as Joel Eriksson, who had a drive-through penalty for pushing another car while running sixth, and BMW wildcard Alex Zanardi rounding out the order.

Juncadella retired with a car failure with five laps remaining.