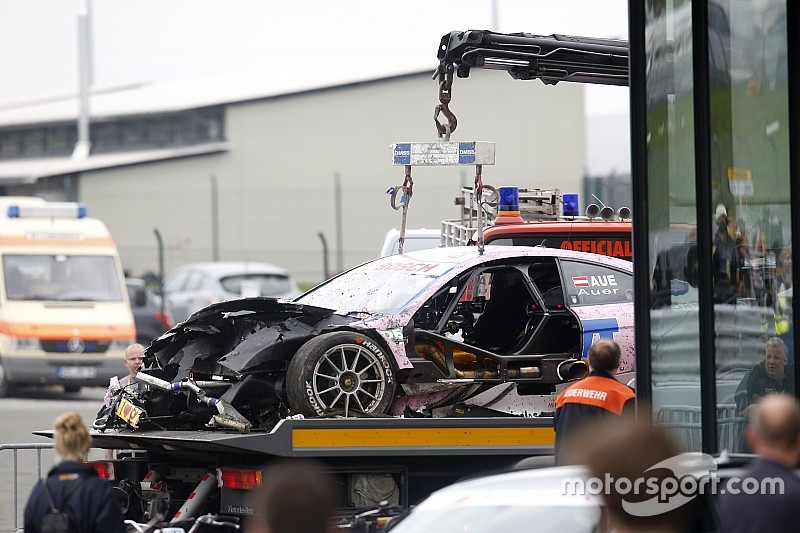 A mechanical issue was behind Lucas Auer's heavy shunt into the barriers during DTM’s Sunday race at Oschersleben, the Austrian driver has confirmed.

Auer went straight on at the penultimate corner late in the race and didn’t manage to slow the car down due to the dampness of the grass run-off.

The car hit the barriers head-on and sustained heavy damage, albeit the Austrian walked away unhurt, with the race being aborted as a result of the crash.

“Mercedes investigated the crash. It was caused by a technical failure,” Auer wrote on Twitter.

In a DTM phone-in press conference, Auer’s Mercedes teammate Maximilian Gotz elaborated on the subject, claiming Mercedes located an “issue at the front axle” of Auer’s car. Apparently, no other Mercedes car was affected.

“All cars were checked but we didn’t find anything unusual. We didn’t have the same problem,” Gotz said.

“Maybe Lucas hit the kerbs a bit too hard during the race. We don’t know. But something broke and Lucas went off.

“Fortunately, he didn’t sustain any injuries. And Mercedes will make sure it won’t happen again.”

Auer is in his first season in DTM, and so far has managed to score points on two occasions.