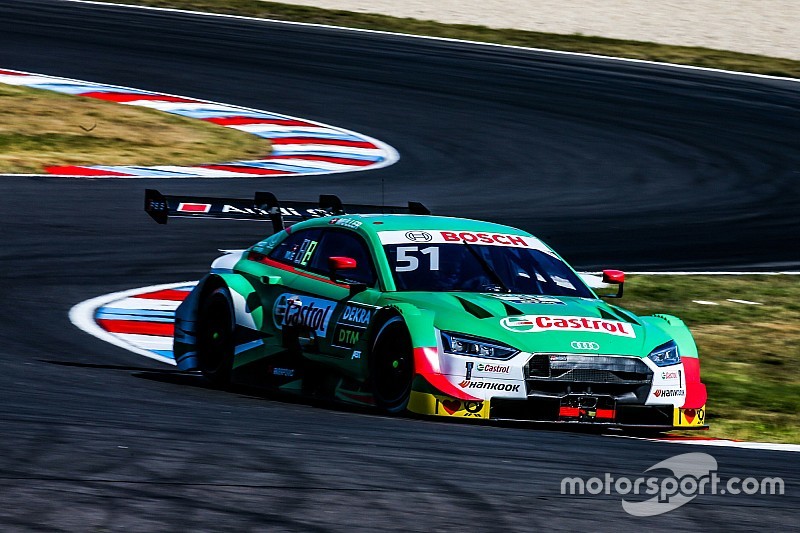 Rast held a 39-point buffer heading into the race, boosted by three points for his earlier pole position compared to Muller's haul of one, but his advantage now stands at just 14 points.

While Rast held the lead at the start, front-row starter Jamie Green made a slow getaway that allowed Muller to jump him for second heading into the Turn 1 right-hander.

Muller remained within a second of Rast through the first seven laps but swept into the lead when Rast's RS5 DTM slowed through the Turns 2-5 complex, forcing him to pull off onto unused banking.

Onboard footage showed Rast slowing moments after hitting third gear following the Turn 1 left-hander, with his steering wheel also vibrating heavily as he went through the subsequent corners.

While Rast continued after falling 30 seconds off the lead, he retired soon after and Audi says the problem has yet to be identified.

Wittmann attempted an undercut by pitting at the end of the 13th tour of 34, with Muller responding by stopping a lap later.

But Wittmann's bid to overhaul Muller was hindered by Audi's Robin Frijns, who had cleared Green to run third early on, and the Formula E driver had become the first frontrunner to make a pitstop, doing so on lap 12.

That meant Frijns's Hankook tyres were already up to temperature, allowing him to dart to the inside of Wittmann - running on cold tyres - at the Turn 6 left-hander for an eventual second place.

Wittmann kept in touch with Frijns through the second phase of the race but was passed by Mike Rockenfeller late on, with the Phoenix Audi driver securing the final podium place.

BMW's Philipp Eng followed Wittmann across the line to finish fifth after making up two places from eighth on the grid early on.

He then had to fight back from losing out to WRT Audi's Pietro Fittipaldi in the pitlane during the mandatory stop phase, and he also picked off eventual sixth-placed finisher Loic Duval.

Joel Eriksson placed his BMW in eighth behind Fittipaldi and Bruno Spengler was ninth.

Green fell from second to 10th place at the flag after he was penalised for an unsafe pit release in which he almost collided with Timo Glock, as the BMW driver entered his pit stall and Green exited his.

Green then ran alongside Rockenfeller on the run to exit the pits but he conceded the place.

Shortly after Green was hit with a drive-through penalty that dropped him down to 15th before his late fightback.

Green's rise meant Jake Dennis narrowly missed out on scoring a point for R-Motorsport, although it would not have counted towards its manufacturers' points total after the Aston Martin team broke four engine seals after qualifying.

Previously, Dennis and teammates Paul di Resta and Ferdinand Habsburg had made minor contact on the opening lap when the three Astons ran side-by-side on the second lap.

BMW's Sheldon van der Linde lost out on a potential top 10 finish when he was forced into the pits late on to change the left door of his car.

His stablemate Glock retired from the race shortly after making his mandatory pitstop and the reason for his retirement is currently unclear.