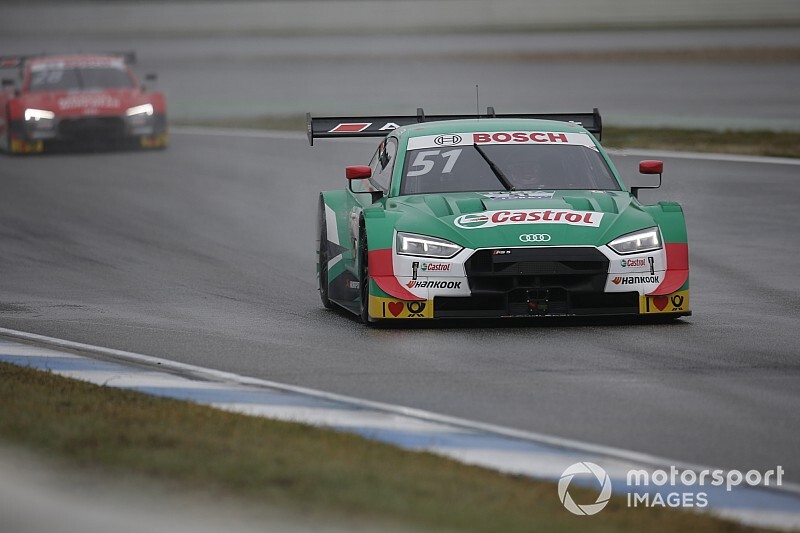 Audi's Nico Muller will start the final DTM race of 2019 at Hockenheim from pole position, while qualifying pacesetter Mike Rockenfeller will line up sixth after a grid penalty earned during Saturday's race.

In torrential conditions, it looked as though Muller was destined for pole after coming out on top in the early battle before stringing together two quicker times in the final five minutes to set a 1m50.813s.

That time had placed Muller just 0.002s clear of Rockenfeller but the Phoenix Audi driver improved next time around to take his first provisional pole of 2019 courtesy of a 1m50.800s lap.

But Rockenfeller will not start from the front due to the fact he earned three black and white flag warnings during the 2019 season, taking a five-place grid penalty as a result.

That means Muller will be elevated to pole, with the best-placed BMW of Timo Glock starting alongside him on the front row.

Audi's Jamie Green will line up third ahead of the BMW's of Joel Eriksson and Philipp Eng, with Rockenfeller slotting into sixth.

Wittmann and eventual champion Rene Rast will line-up next to each other in seventh and eighth.

Their teammates Daniel Juncadella and Paul di Resta had more difficult sessions, qualifying 17th and 18th, with the latter having an off at the Sachskurve before continuing.

The pair placed behind the leading SUPER GT machines of Cassidy, who placed his TOM'S-run Lexus in 16th after his final flying lap.

Jenson Button could only place his Honda in 19th, ahead of WRT Audi's Pietro Fittipaldi, and the final SUPER GT entry of Ronnie Quintarelli will start last and 21st in the NISMO-run Nissan.