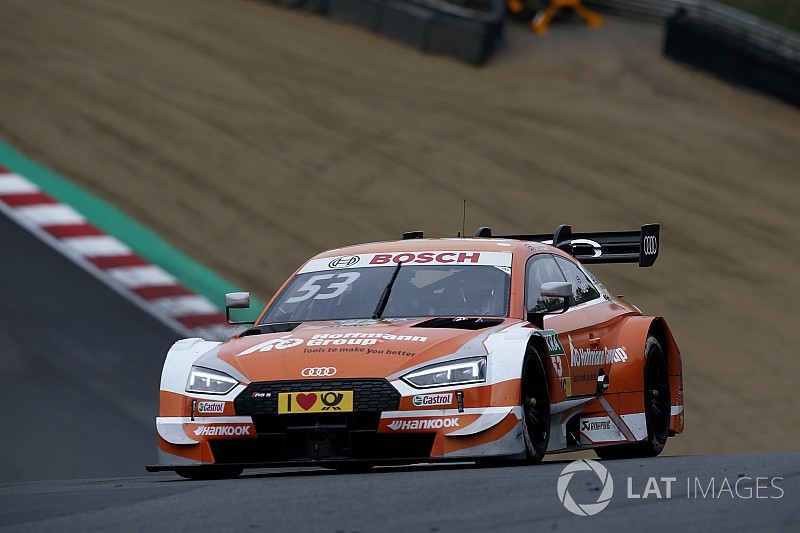 Audi DTM driver Jamie Green has labelled the stewards’ decision that gave him a drive-through penalty in Sunday’s Brands Hatch race a “joke”.

Green led a significant portion of his home race as he chose to leave his mandatory pitstop late, eventually resuming fourth when he finally came in on lap 31 of 40.

However, on cold tyres, he soon fell behind the Mercedes of Pascal Wehrlein on his outlap, before Marco Wittmann’s BMW was able to get a run on Green exiting Graham Hill Bend.

Green moved to the inside to defend but in doing so forced Wittmann onto the grass, an incident that triggered his penalty as it was his second such offence of the race.

His first came on the opening lap, when he was considered to have forced another BMW driver, Philipp Eng, off the road at Druids.

“I think there should be some common sense,” said Green, who went on to finish 15th. “I couldn’t even see [Eng], it was only at the end of the exit [of Druids] I felt a little touch.

“That’s the problem now, if you go to the outside of someone, and there’s a very small overlap and you get knocked off, you can say ‘I was forced off’.

“It’s like football when you get touched and you dive. And they seem to always favour the person who was forced off.”

He added: “In touring car racing, and with the visibility of these cars, you have to be very careful. We have to be a little bit more lenient, in terms of the amount of overlap is allowed until it is classed as forcing off, because I couldn’t even see Eng in Turn 2.

“I got a drive-through [for the Wittmann incident] because they saw it as my second offence. I think the first offence was a joke, to be honest.”

Wittmann, who went on to finish fifth, said he felt Green was in the wrong but stopped shy of saying he deserved a penalty.

“I think he could have left me some room to live, let’s say,” the two-time DTM champion said.

“We have this rule in DTM, that we give room to our next one, and that makes actually the racing great – wheel-to-wheel, side-by-side for more than just a corner, which we had in Hockenheim with Timo [Glock] and Gary [Paffett].

“In that case, he came out of the pits with cold tyres, I had the momentum out of Turn 3 [Graham Hill] with the hotter tyres. He moved completely over, I had to go on the grass, so it was quite a dangerous manoeuvre.

“In the end if he could have left me some more room, it would have been good for me, and good for him because he wouldn’t have had the penalty.”

Green also revealed he had a slow puncture on the lap he came into the pits, without which he may have emerged far enough ahead of Wittmann to have avoided the incident altogether.

“Before I pitted I had a puncture, so I lost at least a second on my in lap,” he explained. “The rear-left tyre was losing air, so that was a concern.

“I lost time there, and then the pitstop felt slow, one or two seconds [lost] I would guess. I could have been clearly ahead of Wittmann without those problems.”