Mercedes driver Luca Stolz took a dominant first DTM victory at the Nurburgring after leaping to the front at a safety car restart and controlling the rest of the race.

The Haupt Racing team driver started seventh and ran fifth in the early stages before a safety car was called when David Schumacher tipped three-time champion Rene Rast into the gravel at the final corner.

This coincided with the pit window opening on lap seven, and a quick turnaround from his team when the pack poured into the pits meant Stolz rejoined in the net lead over poleman Sheldon van der Linde.

He then made no mistake at the restart to cleanly negotiate the only driver who didn’t pit under safety car – 17-year-old debutante Theo Oeverhaus in the Walkenhorst BMW – around the outside at Turn 1 before bolting into a lead he’d never lose over Dennis Olsen’s SSR Porsche.

Preining and Stolz passed Kelvin van der Linde in quick succession on lap two in the arena section, and had joined the rear of a queue of cars behind leader Sheldon van der Linde who was carrying 25kg in success ballast and running fractionally less boost pressure than in qualifying after a late Balance of Performance tweak.

Eng appeared the faster of the two BMWs, but the Austrian’s race was ruined by the arrival of the safety car, with DTM rules prohibiting double-stacking in the pits.

He had to continue at slow speed for a further lap and rejoined deep in the field, before being eliminated at the restart when Felipe Fraga punted Clemens Schmid into his path.

Wittmann was then edged off the track by Preining, dropping a hatful of positions and falling out of the top 10 at that stage, as Preining’s loss of momentum allowed Bortolotti and Gotz through. Muller also passed Preining at the final corner shortly afterwards.

As the top three checked out, Kelvin van der Linde steadfastly defended his fourth place from Bortolotti, who had been given a five-place grid penalty for contact with Fraga in race one and started back in ninth.

The Grasser Lamborghini driver pressured his Abt Audi rival for several laps before making his move at Turn 4. The pair made contact, puncturing Bortolotti’s right-rear wheel and forcing him to retire, scoring no points for the second consecutive race.

Defending champion Gotz was therefore promoted to fifth ahead of Muller, Preining and Grenier.

Sheldon van der Linde and the recovering Wittmann completed the points after Fraga, who had finished tenth on the road, was penalised five seconds for his earlier clash with Schmid. 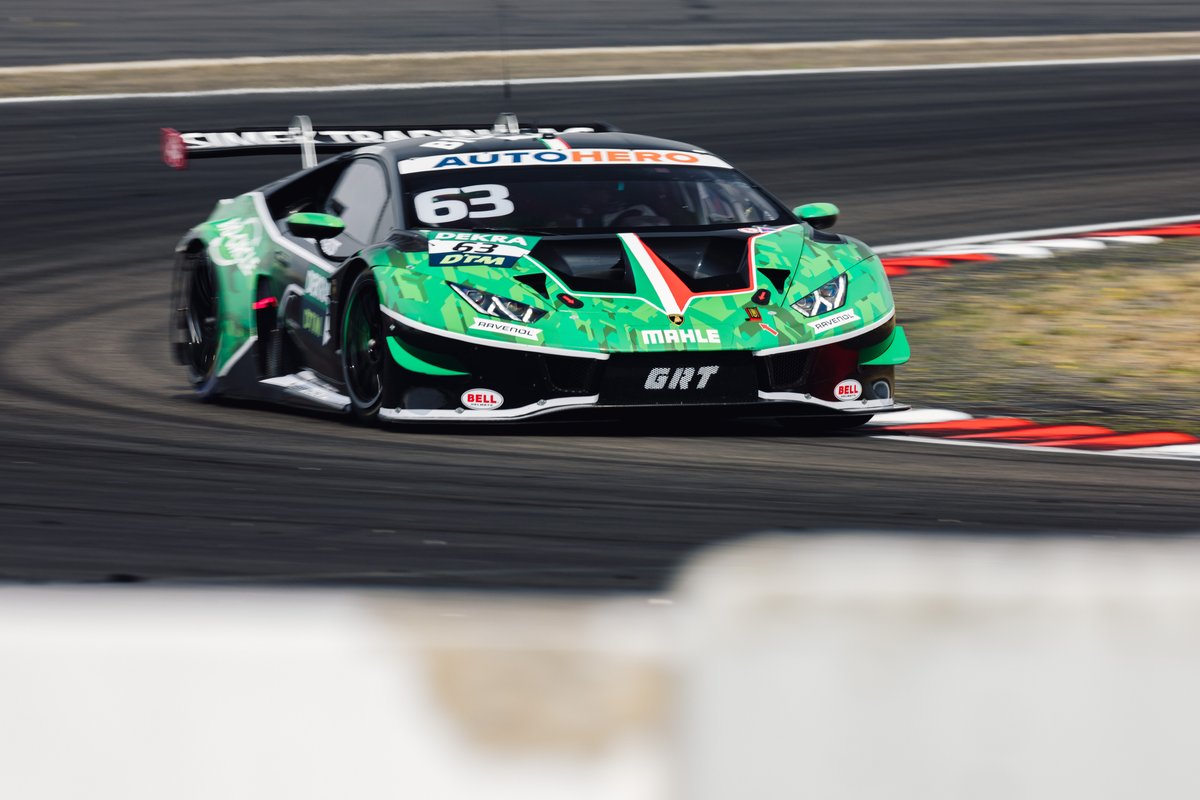