DTM back in Germany – Audi at the top of the standings 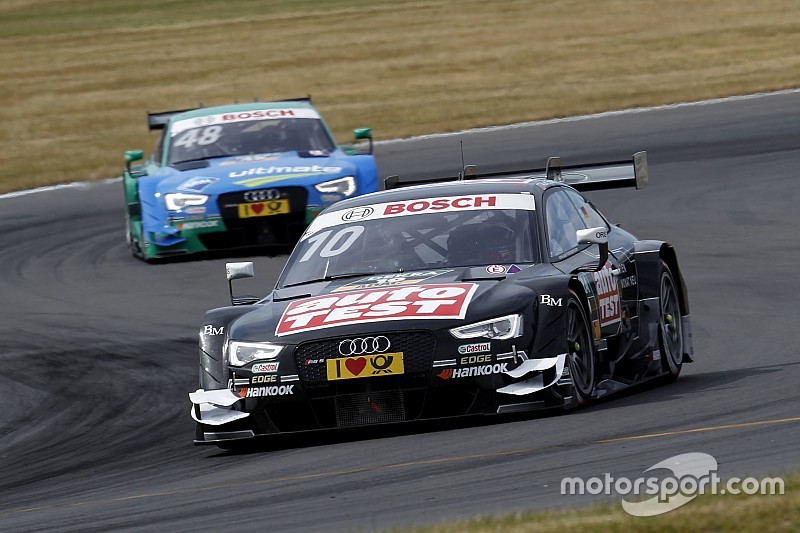 DTM at Oschersleben from September 11 to 13

With Audi driver Mattias Ekström leading the drivers’ standings and Audi in the top spot of the manufacturers’ classification, the DTM is returning to Germany. From September 11 to 13, the internationally popular touring car racing series will be visiting the Motorsport Arena Oschersleben.

On the race track at Oschersleben in the fertile lowlands of Magdeburg, Audi driver Mattias Ekström scored a thrashing victory in 2011, with an advantage of 42 seconds – a world of difference in DTM racing. “I remember the wet race well,” says Ekström, who clinched his previous victories in the 2015 season, at Hocken­heim and at the Red Bull Ring, in rain and difficult conditions as well. “I’m always delighted to return to Oschersleben,” emphasizes the DTM’s front runner. “Even though I’ve still got to wipe out an old score: I’ve never managed a perfect weekend there on a dry track.”

Traveling to the Magdeburg region with an extra dose of motivation.

Will it work out this time? The prerequisites for this to happen will be similar to those most recently at Spiel­berg and Moscow where Ekström was driving the heaviest car in the field in both events. Still, he claimed a victory, a third place and a total of 50 points in the drivers’ standings, rewarding him with the top spot on the leaderboard. “Obviously, it’s great to be traveling to Oschersleben as the leader of the standings, but I’d like to leave again as the leader as well,” says Ekström who, with 21 victories under his belt, is the most successful active DTM driver. “But winning there won’t be easy. My goal is to clinch two podiums. Positions in the top five would be okay, but scoring points twice the minimum.”

Oschersleben is the only DTM race track on which the teams were allowed to run pre-season tests. “That’s why we’ve already gathered a lot of information about the set-up of the cars,” says Dieter Gass, Head of DTM at Audi Sport. “But we know that due to its curbs the track will be extremely hard on the material and overtaking difficult despite the drag reduction system. That’s why the two qualifying sessions will be even more important. In the race, turn one will be a key section, which is why most of the spectators are sitting there. The audience at Oschersleben is always particularly enthusiastic. We’re looking forward to this tremendous crowd and, following our good results at Moscow, are traveling to the Magdeburg region with an extra dose of motivation.”

Audi drivers with fond memories of the Motorsport Arena

Audi has won at Oschersleben four times so far. Le Mans legend Tom Kristen­sen (2004) and Timo Scheider (2008) each celebrated the first victory in their DTM careers there. In 2013, Audi managed to put all eight cars into the top ten, and thus in the points, at Oschersleben – a DTM record. Most of the Audi drivers have fond memories of the Motorsport Arena. Moscow winner Mike Rockenfeller finished the race in both of the past two years as the runner-up. Edo­­ardo Mortara has been on the DTM podium at Oschersleben twice and in 2010 secured the championship title in Formula 3 there. Jamie Green clinched his first DTM podium for Audi in 2013 and last year had an advantage of more than ten seconds when the safety car was deployed and thwarted a possible victory. Timo Scheider, who won twice in a row there in 2008 and 2009 and, following his compulsory break at Moscow, is returning to the cockpit of his Audi RS 5 DTM, has a very special relationship with the East German track.

The first of the two DTM races at Oschersleben will start earlier than usual on Saturday, September 12, at 13.33 and the second one on Sunday, September 13, at 15.13.

The evolution of Mercedes DTM cars since 1988