DTM drivers need to show more “respect” to their fellow competitors, teams and paying spectators after a crash-filled Norisring race on Saturday, according to Winward Racing team boss Christian Hohenadel.

Only 11 of the 27 starters made the finish after a race blighted by incidents, causing several teams to work into the night to repair damaged cars for qualifying on Sunday.

Such was the damage inflicted on Esteban Muth’s Walkenhorst BMW and the Grasser Lamborghini of Franck Perera, after Muth was rammed by Perera’s teammate Alessio Deledda approaching Turn 1 and sent spinning at unabated speed into Perera, that both have been forced to withdraw from the meeting.

Hohenadel, whose team lost David Schumacher to a lap one pileup at the first corner and Lucas Auer to contact with Ayhancan Guven’s hobbled Ferrari, told Motorsport.com that the scenes of carnage “was not a good image for the DTM”.

“It’s a disrespect of the majority of the drivers to each other and also maybe caused a little bit by not being a tight two-by-two formation as we had it in Portimao.”

Hohenadel added that starts were “always a kind of mess” because drivers were spreading out to get a better view of the starting lights or holding back in anticipation of the start.

This caused bunching of the pack that Hohenadel believes contributed to the problem.

“It’s really important that we have the behaviour of the starting grid, it started already a little bit in Imola [last time out],” he said.

“If it’s a tight formation and they accelerate at the same time, then it’s two-by-two and then it’s okay.

“They are all pros here, it’s one of the top series, I know that we can do better.” 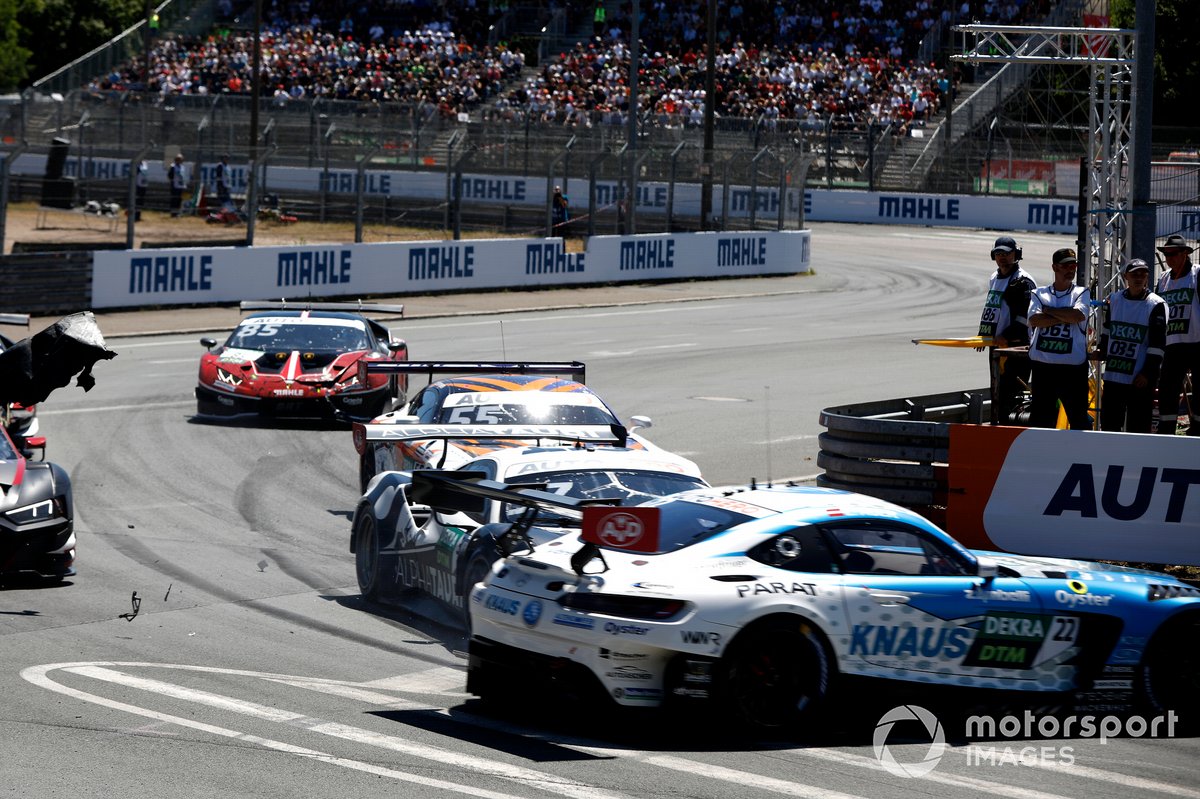 Series debutante Perera, who had qualified fourth filling in for an unwell Ineichen before being embroiled in the opening lap fracas when a touch from Rene Rast sent him into Arjun Maini, agreed with Hohenadel that respect was lacking.

The Lamborghini factory driver told Motorsport.com: “For me it’s not because it’s a GT that you can drive it like a stock car.

“You have to respect and you have to overtake cleanly.

“I always respect the team and everything, because it cost so much money.

“I think sometimes, some drivers don't think about this, they don't care.” 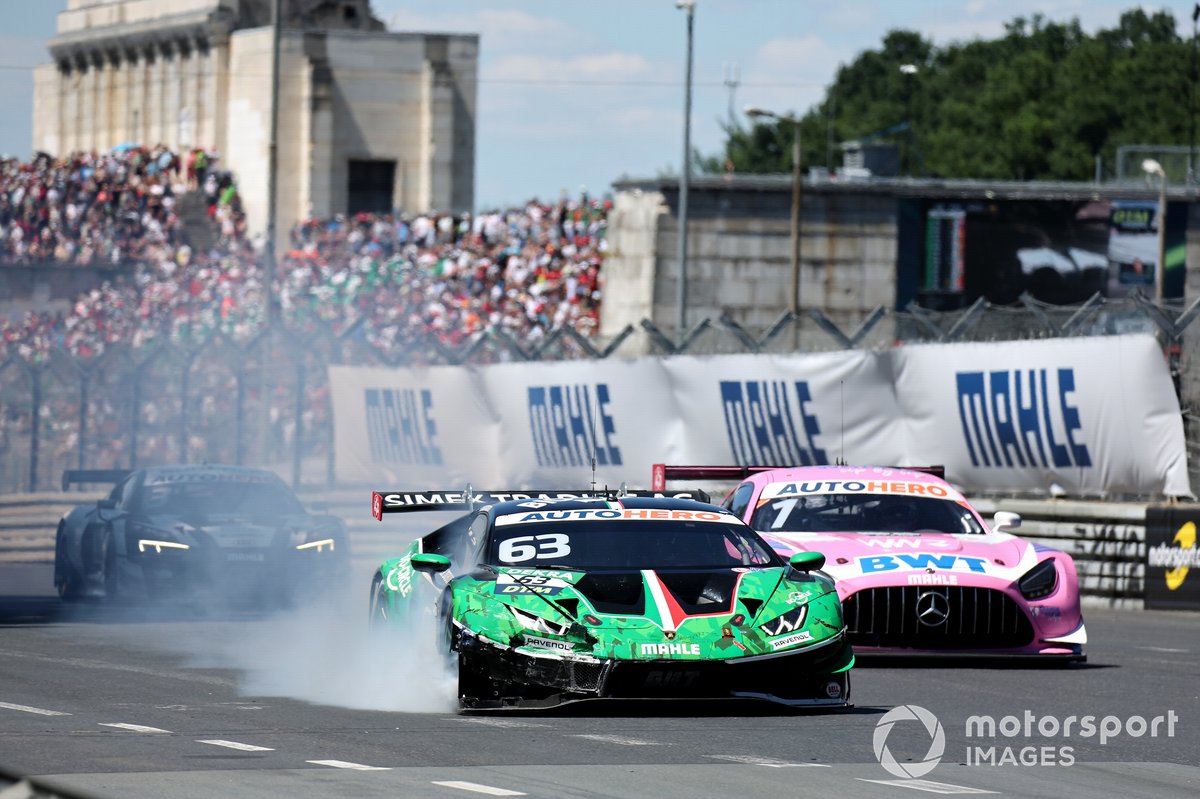 Maro Engel retired from the race when he was hit from behind by Mirko Bortolotti approaching Turn 4, causing heavy damage to his Gruppe M Mercedes.

Grasser Lamborghini driver Bortolotti, who was handed a 15-second penalty for the crash, was later involved in another incident when he tangled with poleman Kelvin van der Linde. Both retired soon afterwards.

Engel told Motorsport.com that he felt “the level of aggression has slowly but surely raised over the last races” and called on the series organisers for a driving standards crackdown.

“There was a few moves that I saw at Imola that were probably questionable in terms of the level of aggression and changing the direction very late, blocks and things like that,” he said.

“So somehow it probably all culminated at the wrong track, wrong time of the season with the level of aggression.

“The quality of the field is beyond question, but it’s such a tight field that everybody knows obviously it’s really hard to make overtakes and you need to make them quite early in the race or at restarts.

“I think there’s probably a line that needs to be drawn in terms of respecting the driving standards that the rules foresee.

“In some cases, today the incidents were just too much and caused a lot of problems.”

“Of course, we also have to talk to our drivers about it, but ultimately, the teams and the racing series have to find a solution together.

“What happened today was very costly and affects us all. I really hope it doesn't repeat itself like this on Sunday.”

Speaking to Motorsport.com, Team Rosberg boss Kimmo Liimatainen agreed that “today was definitely not a good day I think for the whole thing because 65% of the cars are out”.

Both Rosberg drivers, Nico Muller and Dev Gore, were eliminated after being caught up in the opening lap fracas at Turn 1, with Muller labelling driving standards "ridiculous" in a TV interview.

However, Liimatainen stopped short of stating that driving standards needed to be addressed, suggesting it was a function of the circuit’s tight nature.

“These guys are the best GT3 drivers in the world and this problem we will always have in this kind of a circuit,” he said.

“There are so many professional drivers in the field, obviously one would expect then there is no incidents.

“But maybe it’s a summary of things, having a street course, first corner like it is and all this. Then maybe there is only one who has maybe the brain switched off and then you get the problem.”

Race one winner Thomas Preining offered a similar view in the press conference, stating that “on a track like this it’s inevitable” to expect a higher volume of accidents.