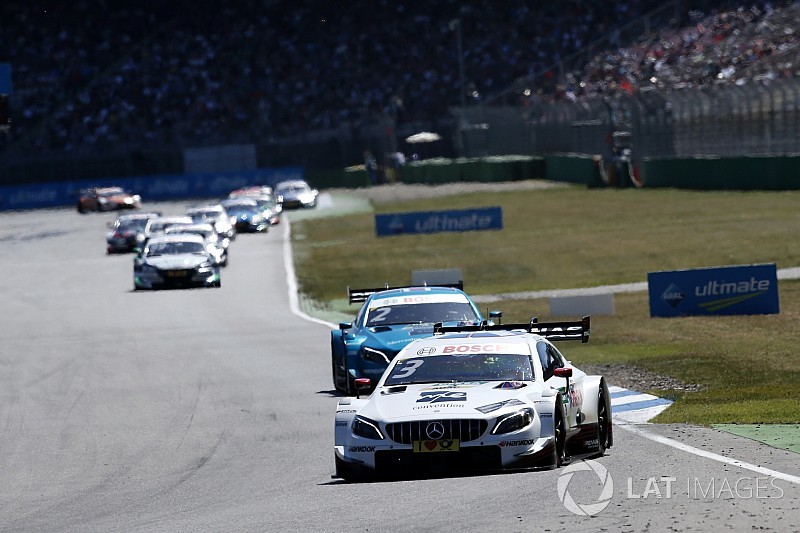 Mercedes DTM driver Paul di Resta believes the changes to lower costs and spice up racing in this year’s German tin-top series have come "too late".

The series has reportedly cut costs by 30 percent, and has reduced the aerodynamic aids on its cars, which produced close racing across in the season opener in Hockenheim last month.

The second race of the double-header, where Timo Glock of BMW and Gary Paffett’s Mercedes went door to door for much of the contest, was universally praised as one of the best DTM races in years.

But 2010 champion di Resta believes the changes have come too late, amid his employer Mercedes pulling out of the championship for 2019 to focus on Formula E.

“It’s always nice to see a good fair battle, it’s what DTM needed,” said di Resta of Glock and Paffett’s fight, as he watched on from third behind the pairing.

“It’s probably a bit too late to be honest, the way the regulations have been going over the past few years, but it’s nice to see eventually it’s there.

“Survival is the key, we know how keen the championship is to continue."

The DTM is actively trying to attract customer outfits for 2019, the series currently made up of works-supported Audi, BMW and Mercedes teams. It is also chasing a tie-up with Super GT.

Di Resta has thrown his backing behind the series, which he credits for helping to launch him into F1 with Force India in 2010 as a reserve driver, before getting a full-time seat in 2011.

“In my eyes it’s still the best championship other than Formula 1 and I believe it still is,” added the 32-year-old. “To continue that, maybe there’s a way they need to adapt to keep the interest up, but only time will tell.”

The DTM will use a new layout at the Lausitzring this weekend, with longer straights set to boost the effect of DRS.

Audi driver Jamie Green led the praising of the adjusted layout at the circuit, which now only hosts the DTM after being closed to the public after it was sold to automotive testing company Dekra last year.

“To have a change of track layout is a good thing, the old track was pretty short,” he said. “There was a period of time where the fashion of DTM was to make the tracks shorter. I’ve never been a fan of that.

“I think we have proper racing cars and we should drive on proper circuits, and to me this is a better layout.”

Di Resta also backed the new layout, saying: “I think the race you saw in Hockenheim, DRS is effective and with that extra bit of straight lines, it should throw up something different as the track has been a little bit short in the past."