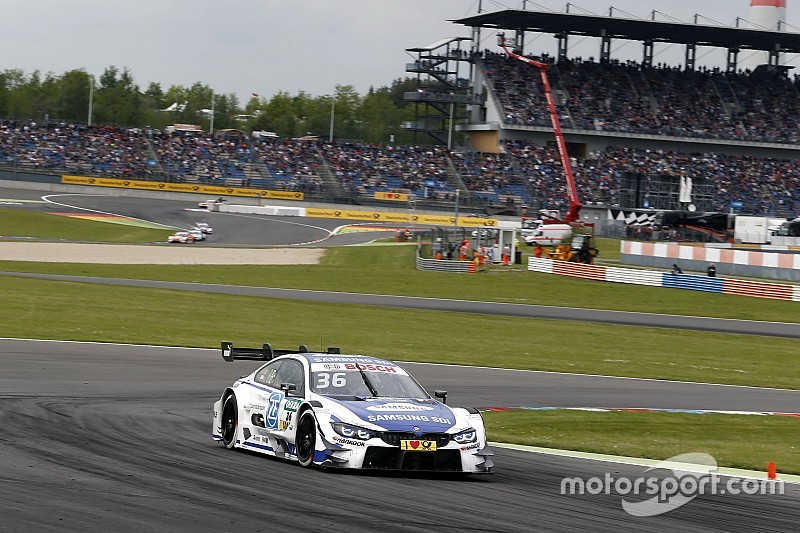 BMW DTM drivers Maxime Martin and Tom Blomqvist have urged the Bavarian manufacturer to improve the race pace of its M4 challenger after a "quite bad" start to the 2017 season.

BMW, which won the drivers' title with Marco Wittmann in both 2014 and 2016, as well as the constructors' crown in 2015, has lagged behind rivals Mercedes and Audi in the first two rounds of the new campaign.

It scored the least amount of points of the three manufacturers in both Hockenheim and Lausitzring races, and has only 64 points compared to the 187 of Mercedes and 177 of Audi.

Martin was the top BMW driver in both Lausitzring races in fourth and eighth, but the Belgian was not happy with his team's place in the pecking order.

"In the overall picture I am not really happy; it is quite bad," Martin told Motorsport.com. "We have to work hard to be better, we were expecting a bit better for sure.

"First BMW [in both races] which is good, but in general it is not really what we are looking for."

Despite DTM introducing softer tyres for 2017, Mattias Ekstrom pitted on the opening lap of the Sunday Lausitzring race on his way to second place, leading Robert Wickens to say Audi is kinder on its tyres than Mercedes.

As for BMW, Martin says its tyre degradation is higher, but his team is also suffering from lack of race pace from "Lap 1 onwards".

"We have to work hard to try to improve especially the race pace, that is where we are really lacking, and try to come stronger in the next races," said the Belgian.

"Tyre deg for us is for sure higher but in the race from Lap 1 onwards they are just quicker. I think it is the way they use the tyre."

Timo Glock is currently the only BMW driver in the top 10 of the standings in eighth, having stood on the podium and taken a pole position at Hockenheim.

Blomqvist, who also made it to the front row on the grid of the second Lausitzring race, believes the M4 DTM car has potential, but "nothing seems to be going to plan".

"For sure there is potential in the car because we can do quick laptimes in qualifying, things like that, but we struggle to look after the tyres it seems," the Briton said.

"Far from it, challenging, nothing seems to be going to plan. The race pace is just not good enough so it is proving to be a challenge at the moment.

"We need to regroup and try to understand how we can improve in the next races because at the moment we are not strong enough in all around so we got some work to do."

Duval admits adapting to DTM has been difficult