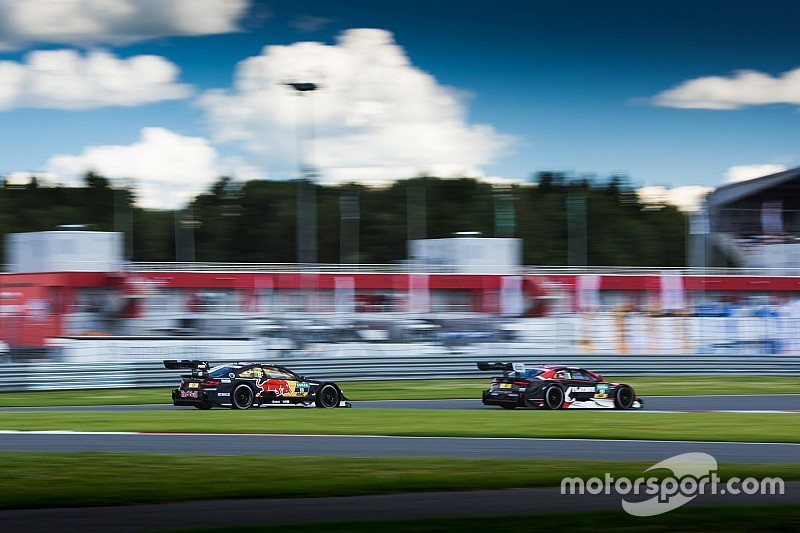 Muller left his mandatory tyre change until the end of the 33rd lap of 36, in the process holding up a quartet of cars that had benefitted from pitting during an early safety car period.

That group was headed by BMW's Marco Wittmann, although the reigning champion slipped behind Maro Engel's Mercedes while the pair were bottled up behind Muller.

Engel went on to score the first win of his DTM career by three tenths of a second from Audi man Mattias Ekstrom, the best of those to pit after the safety car period, while Wittmann slipped to sixth.

BMW boss Jens Marquardt was incensed, accusing Muller of being a "water carrier" for his teammates, while Mercedes chief Ulrich Fritz said Audi was guilty of "playing chess" instead of racing.

But, when his counterparts' views were put to him, Audi motorsport boss Dieter Gass said he wasn't certain that Muller was even holding up the cars behind.

"The strategy was to go long, and I think he went at the pace he was able to go," Gass told Motorsport.com.

"I'm not sure if everybody behind him was able to go quicker, because at one stage Wittmann even dropped out of the DRS window.

"It was an extreme strategy, but I think it paid off with a very exciting race for everybody."

In his own defence, Muller said he was simply trying to manage his pace to be able to go for a late stop, and also pointed out that the cars he was holding up were unable to find a way past.

"The safety car obviously changed our strategy a bit," the Swiss told Motorsport.com. "I was expecting to go long, so I had to manage my tyres and try to survive for a long stint.

"Obviously while you do that, as a racing driver, you don't want to lose position, and that's what I tried to do. I think it did work out quite well."

Asked what he made of Mercedes' and BMW's complaints, the Swiss driver added: "You can re-watch the race and see how many times I closed the door on the long straight – probably two or three times.

"I don't really see it that way. They had DRS, I didn't and they didn't manage to get past on such a long straight. They first have to sort their stuff out and then we can talk."