Nürburgring winner is ‘Race Driver of the Year 2012’

Ingolstadt - Markus Winkelhock, winner of the 24-hour race at the Nürburgring with the Audi R8 LMS ultra, was voted ‘Race Driver of Year 2012’ in the category sportscars.

Eight budding talents were allowed to test the Audi A4 DTM. And Rahel Frey was guest on the opening weekend of the Essen Motor Show. 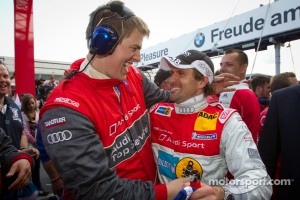 Race Driver of the Year: Important award for Markus Winkelhock. The Swabian, who won the 24-hour race at the Nürburgring in May with an Audi R8 LMS ultra entered by Audi Sport Team Phoenix, was voted ‘Race Driver of the Year 2012’ in the category sportscars by readers of the German specialist magazine Auto Bild motorsport.

The prize was presented by his former Team Boss Konrad Schmidt, who won the DTM title for Audi with his team SMS in 1990.

Budding talent evaluation: Once again Audi Sport gave a series of young drivers the chance to demonstrate their skills at the wheel of a DTM race touring car at the end of the season.

Throughout the event they received advice from the two Audi "factory" drivers Filipe Albuquerque and Miguel Molina, who also prevailed at a comparable young driver test several years ago.

Popular guest: Audi "factory" driver Rahel Frey was guest during the opening weekend of the Essen Motor Show. The popular DTM driver from Switzerland signed innumerable autographs throughout the event.

The exhibition in Essen is open up to this coming Sunday (December 9). Vistors can admire numerous current Audi race cars on various stands during the week. DTM driver Filipe Albuquerque is guest at the Essen Motor Show on the second weekend.

Champions meet: Two DTM Champions met at the ‘Race Night’ in Essen on Friday evening. On behalf of his partner ‘AUTO TEST’, Audi factory driver Timo Scheider, DTM Champion in 2008 and 2009, presented current Champion Bruno Spengler with a golden race drivers boot. Scheider announced that he aims to reclaim the boot from Spengler in the 2013 season ...

German premiere: The Wii U celebrated its German premiere at the Essen Motor Show. One of the ambassadors of Nintendo’s new home video game console is Audi factory driver Timo Scheider, whose Audi A5 DTM also carries the Nintendo logo.

Outing at Daytona: Allan McNish and Mike Rockenfeller contest the 24-hour race at Daytona (US state of Florida) at the end of January. Both received permission from Audi Sport to compete in the US endurance classic.

A word from Markus Winkelhock:

Your were voted as ‘Race Driver of the Year 2012’ in the sportscar category by readers of the magazine ‘Auto Bild motorsport’. Were you surprised to receive this award? "The prize is a great honor for me, particularly as there are a great many top drivers racing in sportscars.

It shows that the fans obviously like me and it appears that I did a good job in the 2012 season.

It also shows just how highly the 24-hour race at the Nürburgring ranks with the fans - in addition to winning the GT1 championship title, the victory in the Eifel was my big highlight and certainly also instrumental for the readers of Auto Bild motorsport."

Speaking of 24 hours Nürburgring - what does this win, which you achieved with the Audi R8 LMS ultra, mean to you? "A great deal! It was a fantastic weekend with a great atmosphere and extremely strong competition.

The car was super, the driver line-up absolutely right and the team did a brilliant job. The Nordschleife the most difficult track in the world and to win there is something very special.

That we could also fulfill a lifelong ambition of Werner Frowein made the victory even sweeter."

You recently drove another 24-hour race - for slotcars ... "That was a crazy event. To begin with I didn’t even know what to expect. I’d never done anything like it before.

But it was really great fun and at the end we even managed to finish in a sensational second place with our Audi R8. If the timing is right again next year I’d be delighted to be there in the 24 Hours of Hamburg again!"

What does the future hold for Markus Winkelhock in ‘big’ motorsport? "It should be determined in the next few days and weeks. I hope that I can race as often as possible for Audi. Audi is just a fantastic brand - and the Audi R8 a fascinating car."

Biagi is the most successful BMW privateer of the 2012 season