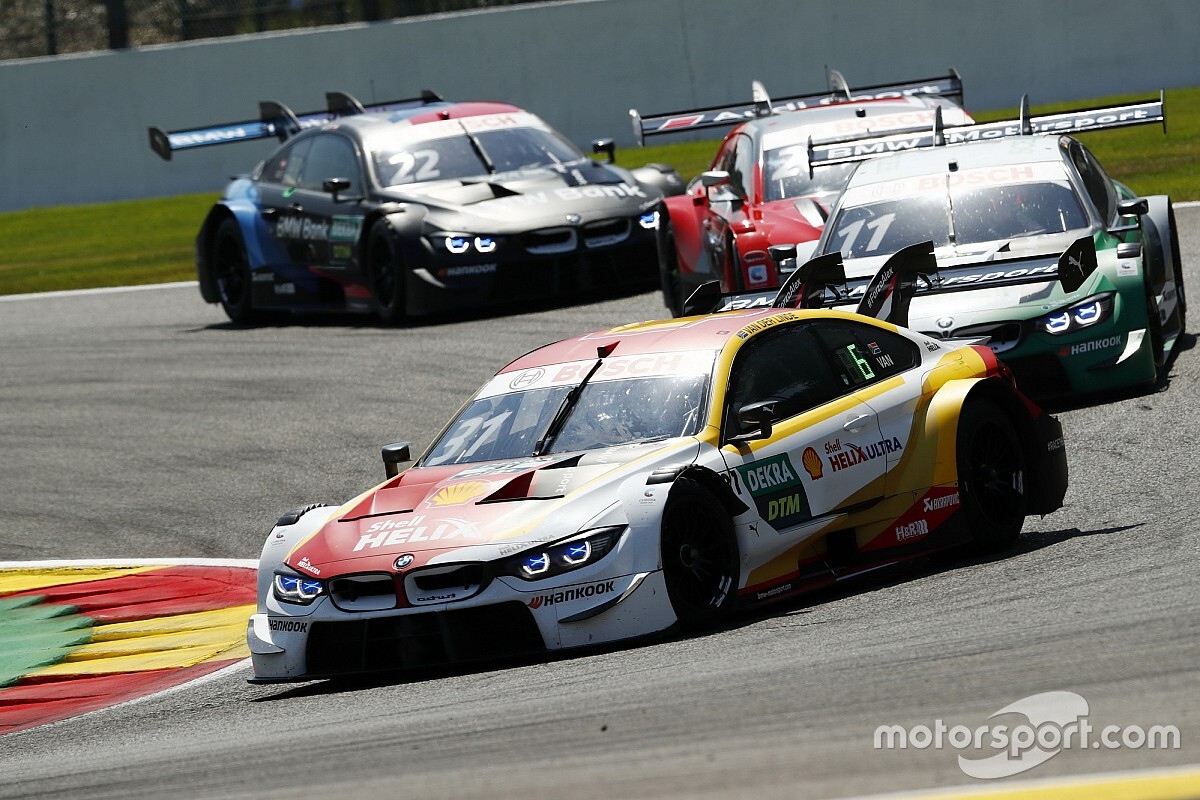 Audi drivers Loic Duval and Robin Frijns believe BMW’s lack of pace in the DTM season opener was primarily down to the peculiar demands of the Spa-Francorchamps circuit.

BMW has endured a difficult start to the second season of the Class One era, with its six factory-run M4 DTM cars unable to break inside the top five in either of the two races at Spa last weekend.

The gulf between the two manufacturers prompted two-time DTM champion Marco Wittmann to say Audi was in a “different world” to BMW, and add that Audi held a one-second advantage around the Belgian circuit.

However, Duval, who finished on the podium in Saturday’s race, expects BMW to return to form at the more conventional Lausitzring circuit later in August.

Duval highlighted the lack of running at the 7.0km circuit prior to the races, with the only practice session of the weekend taking place at a damp track in cool conditions.

“I do believe they will be stronger [at Lausitzring],” Duval said. “I think they had a typical track. And we saw in past months, already in Fuji in Japan, and also in winter test.

“From our point of view they did close the gap compared to last year. It’s quite a surprise for Audi and the drivers that they were struggling this weekend.

“But again it was a different kind of weekend. The schedule was different and didn’t allow a lot of testing and setup changes and stuff like that. So we have to wait and see. But we believe they will be closer in terms of performance.

“Feeling wise, when you are fighting with them, when they put on new tyres in the race they are quite competitive. But it seems they hit the cliff a bit before us and they lose overall performance before us. So that was the main difference compared to them.

“And on a single lap, for sure in quali the guys from Abt and Rosberg did a really good job. But in the end it was not too far away. So I think in a single lap they can fight, they just struggle with their race pace.”

Frijns echoed the sentiments of his Audi stablemate Duval, saying he expects BMW to close the gap to the Ingolstadt-based brand at the next round.

“It’s the first race of the season, Spa, it’s completely different to all the tracks that we’ve been to,” Frijns said.

“We have also never been to Spa before and now we have, the whole DTM field has a lot of experience here [now].

“I definitely think that at Lausitzring the whole pack will be very close together. So hope for some good battles with everyone.”

The extent of BMW’s gap to Audi at Spa came as a surprise to many, as the two manufacturers were closely matched during the sole pre-season test at the Nurburgring in June. Moreover, BMW held the edge over Audi in a manufacturer test that took place at Spa last month in the absence of race drivers.

However, Audi’s reigning champion Rene Rast dismissed suggestions that his marque had been sandbagging prior to the first round of the season.

“I don’t think we were hiding at the test here,” said Rast.  “The thing is we just tried to improve our set-up and to prepare the best as we could for the race weekend.

“And if you prepare yourself, it doesn’t mean you go for the ultimate laptime. You prepare to have a good car in handling, balance - those kind of things.

“It doesn’t mean if you are one second off at the test, that it also turns out to be in the race as well. So we weren’t hiding, we were preparing ourselves, maybe not looking as much at the laptime as we do at a race weekend.”