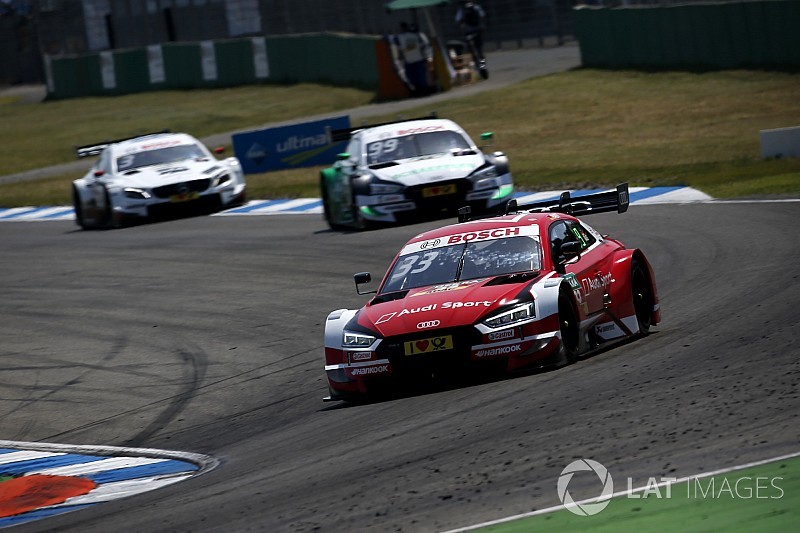 Reigning DTM champion manufacturer Audi says it cannot explain how it was able to go from the fringes of the top 10 to a podium in the season-opening races at Hockenheim.

Audi battled oversteer and tyre degradation problems and defending champion Rene Rast then had a scrappy race to finish ninth, one of only two Audis in the top 10.

That prompted Audi to admit its pre-season concerns with the new rules, specifically the loss of its aerodynamic advantage, had been proven true.

While it did not experiment with set-up on its stronger RS5 DTM cars, such as Rast's, it made wholesale changes to the Audis at the rear of the field in the opener.

But Rast then qualified on the front row on Sunday, and Mike Rockenfeller completed a surprise turnaround with an opportunistic second place which left Audi baffled.

"We didn't experiment on every car, just a few cars and other drivers stayed on very much the same set-up they had on Saturday," Audi DTM boss Dieter Gass told Motorsport.com.

"[It was] just the normal fine-tuning I would say you do between Saturday and Sunday, and they were the drivers who ended up front.

"It's difficult to understand, Rene was the driver with the least changes on the car and was qualifying in P2 and he had his small mistake in the race which dropped him down the order.

"We were better today and I don't know why."

Gass also suggested that cooler temperatures on Sunday may have widened the set-up window and helped its tyre degradation problems.

"We didn't expect that [turnaround] at all after yesterday, we thought we would suffer a little bit again today," said Gass.

"That was not so much the case, we need to admit that there were a few cars on the bottom of the gird and the race result, but at least we had some cars that showed that they can fight at the front as well."

Wehrlein surprised by his speed on DTM return

Why Audi has dropped down DTM's pecking order