DTM boss Gerhard Berger says there have not been discussions over handing the R-Motorsport Aston Martin squad concessions to allow it to catch up to Audi and BMW.

The four Astons are currently running with a power disadvantage that has punished them at circuits such as Misano and the Norisring.

The R-Motorsport squad has also overcome early reliability problems, hitting its nadir at Zolder with multiple engine changes, but a recent test at Vallelunga has helped ease the problems, and the team has scored points in five of the eight races in 2019.

But there has been constant speculation that Aston could be given concessions in areas such as engine development to help it catch up to the leading manufacturers.

In a statement given to Motorsport.com attributed to Berger, the ex-Formula 1 driver said: “R-Motorsport Aston Martin has scored points several times so far this season, and the team’s performance has been steadily improving.

"This is quite a significant achievement for a DTM newcomer in its first season in the series. We know that the whole operation is working hard, and we’re convinced that it will continue to make progress.

"However, we’re not discussing any concessions to the technical regulations, and there is nothing under consideration.”

Any concessions are subject to the DTM Commission with representatives from DTM operators ITR, manufacturers Audi and BMW, and German motorsport governing body the DMSB making up the group to approve technical changes.

DMSB president Hans-Joachim Stuck has the tie-breaking vote if a majority cannot be formed.

R-Motorsport boss Florian Kamelger had suggested at the Norisring that R-Motorsport could make a call for concessions after what he described as a "sobering" weekend for the team.

“Look, in a normal world you analyse the bits and pieces which you have, and you have a couple of versions on the table [of] what could be done," he told Motorsport.com.

"One of which, certainly - and I’m talking about versions only - is a call for further development of such an engine. But as I said, it’s a version.

"And then, after having all the versions on the table, me and my team will decide whether we call one of these options or not. That’s where we are.”

The DTM's engine homologation rules mean that in-season development is restricted to maximising the package and DTM rookie Jake Dennis told Motorsport.com that R-Motorsport had spent its Vallelunga test "fine-tuning" in areas such as gear changes and braking.

R-Motorsport has used up its quota of test days following the Vallelunga running with Dennis and Paul di Resta.

Di Resta had suggested at the pre-Brands Hatch media day that R-Motorsport should receive concessions over the winter when development is more open.

"I think in the winter they [the DTM] need to give some concessions," he told Motorsport.com. "It’s above my pay grade to say where it’s gone but in the past... they want three equal manufacturers in the championship.

"I think it’s right to do that. Audi and BMW have had more time to think about it [2019 development], more resource behind it and they’ve done a good job, very strong, especially Audi."

The DTM is unlikely to support changes in areas such as weight reduction for the Aston Martin squad with Berger a vocal critic of the performance weights system that was in place until it was scrapped by the Austrian in 2017. 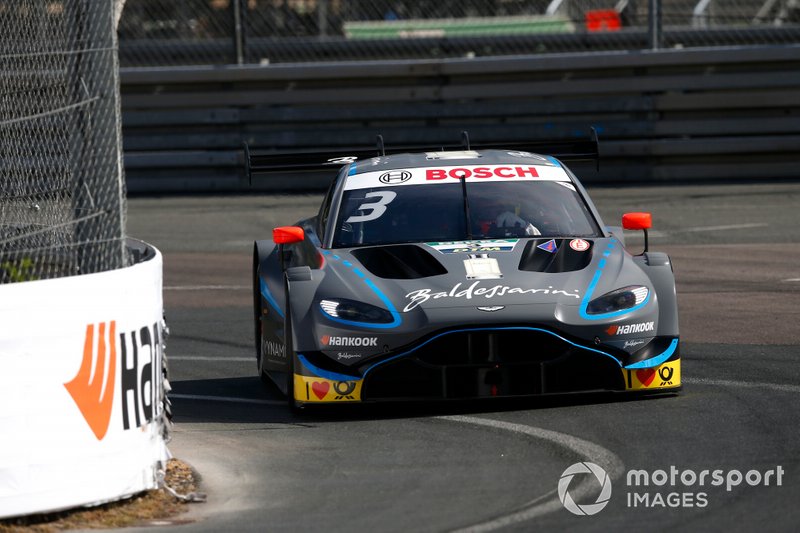 Motopark in talks to enter DTM with privateer BMWs