Albon would have taken first DTM win 'at any other track'

Red Bull Formula 1 reserve Alex Albon believes only the tight and twisty nature of the Zolder circuit prevented him from scoring a maiden win in the DTM last weekend.

The Anglo-Thai driver enjoyed his best weekend in the DTM at the former Belgian Grand Prix venue, finishing third and sixth across the two races to consolidate fifth place in the standings.

The 25-year-old qualified a career-best fourth in first qualifying on Saturday, missing out on pole position by just 0.171s - although a five-place grid penalty for not slowing down sufficiently during a red flag in practice left him ninth on the grid.

Albon elected to run long in the first stint and was lapping quicker or at the same pace as net race leader Kelvin van der Linde, aiming to overcut his rivals by running in clear air.

The strategy paid off, the AF Corse Ferrari driver returning to the track in third position behind the Abt Sportsline duo van der Linde and Mike Rockenfeller.

Equipped with fresher tyres, Albon shadowed the Audi drivers for the rest of the race, coming close to making a move at several occasions.

Ultimately, Zolder’s lack of overtaking opportunities meant that he was never in a position to make a pass, the trio crossing the line nearly nose-to-tail in what was the closest finish of the 2021 season.

This marked Albon’s first actual trip to the podium, although he was retrospectively promoted to third at Monza following disqualification for Mercedes driver Vincent Abril.

Speaking after the race, Albon felt he could have easily won at a more overtaking-friendly track with the strategy he employed, such was his pace advantage over the Audi duo.

“I think we had a good pace all weekend,” he said. “We had a five-place grid penalty for qualifying which I still think was pretty harsh, it made the race a little bit more difficult.

“The start itself was okay, we didn’t make too many positions, but the most important thing for us was to get clean air. We knew we had the pace as long as we stayed out in front - the degradation is not massive like other circuits.

“We planned [our strategy] before the race started. We said if everyone jumps in the pits, let's stay out in clean air and let everyone trip over themselves. And that was pretty much what happened.

“In any other track we could have won this race, but Mike and Kelvin with their experience don’t make mistakes. I was trying to get them to make some but [they didn’t].

“Especially following for so long, the brakes start to get long, everything starts to overheat. Unfortunately P3 was the best we could have done.”

While Albon was expected to be the star performer on Red Bull’s return to the DTM, he has been outshone by teammate Liam Lawson in the opening three rounds of the season, with the Kiwi currently sitting second in the championship after a win and two other podium finishes.

However, Albon defended his results compared to Lawson, saying he has been lucky in most qualifying sessions so far - which then left him with too much ground to make up in the races.

“I don’t think it’s especially been a bad season,” said the 25-year-old. “I struggled a bit in qualifying. We’ve had five qualifying sessions [until Saturday], three of which I’ve been stuck behind a car or had an issue.

“I wouldn’t even call this a clean run in qualifying, I was stuck behind a car [again]. So I’ve never really been able to show what I can do. Theoretical lap times have always been up there but I never had a great qualifying.

“The races have been okay but you can only do so much [after starting in the midfield]. Of course, there is some adapting to do, but we are always pretty much up there in practice and races - okay, in qualifying, this was one of the first decent ones I’ve had.

"It feels like we are not as bad as others mostly imagine.” 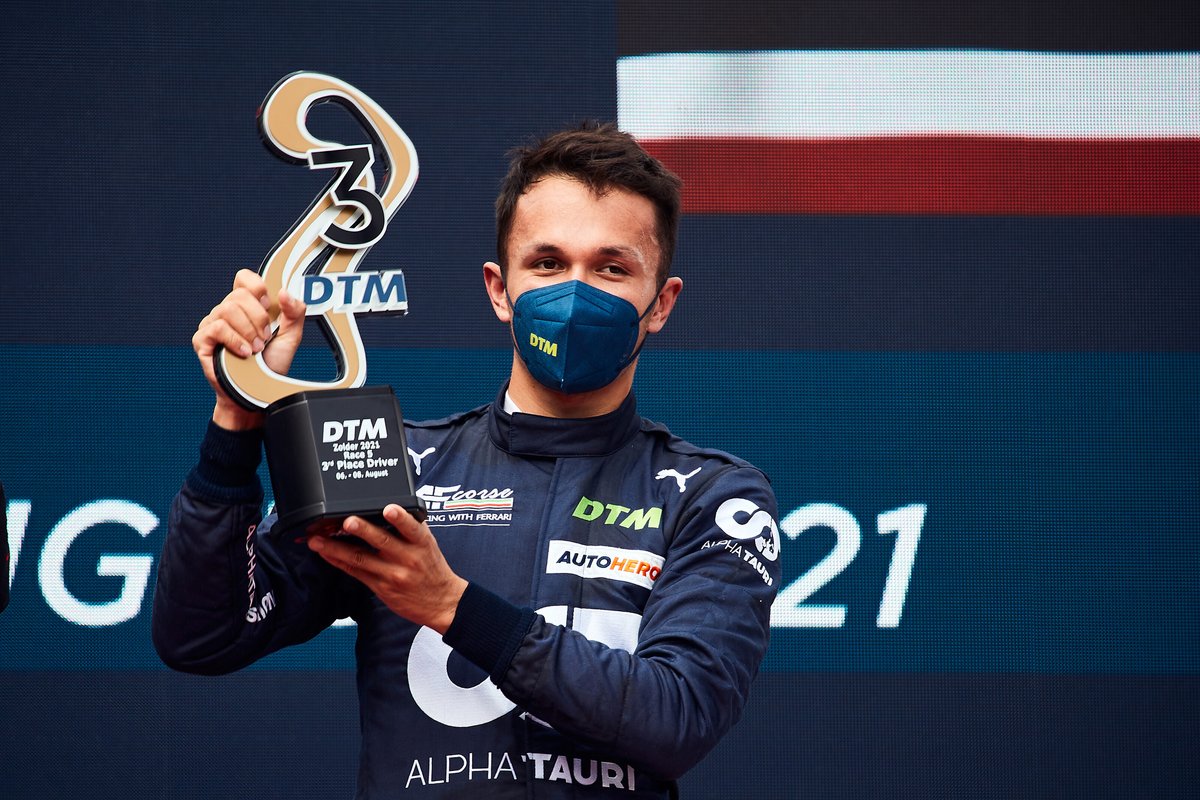 In the first race, Albon stalled out on his way out of the pits, losing anywhere between one to two seconds in the process.

Both Red Bull drivers suffered similar issues in the previous round at Lausitzring, costing Lawson the lead and potentially a second win of the season.

However, Albon insists the team wasn’t to blame for any of the incidents, as he and Lawson are still having hard time adjusting from single-seaters.

“It’s more driver error,” he explained. “It’s being too keen on the clutch pedal as we come down.

“It’s nothing team related. It’s one of them things we have to adapt to from single-seaters to these cars, to have safety modes and everything like that on these cars.

“In F1 we are a lot more reactive to pitstops when it goes green and we accelerate before the cars kind of come down. But here the wheels can’t turn or anything like this so it’s quite a different thing.

“Honestly, a lot of my stuff and most of Liam’s as well, we have muscle memory we have to unplug from our brains and do the right procedures.”

Albon could only qualify 12th on Sunday after a stoppage triggered by BMW's Timo Glock prevented him completing his final run. He went on to finish sixth in the race with a similar strategy to Saturday's opening encounter.