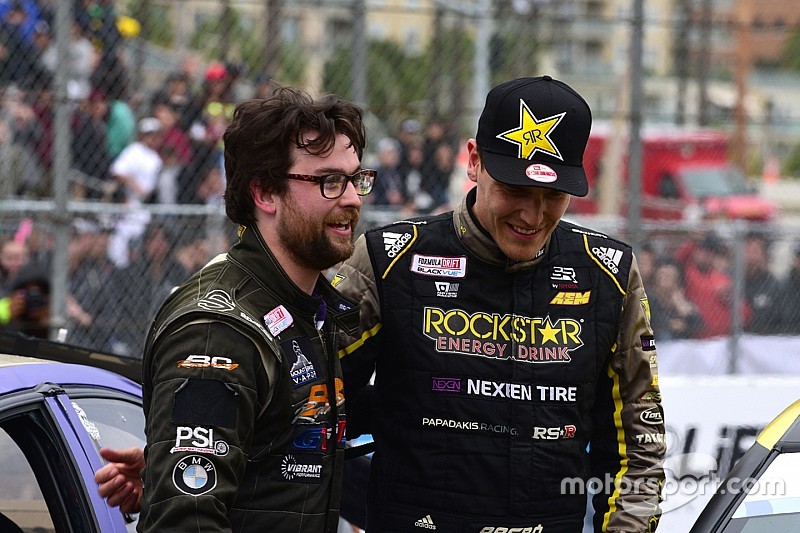 Long Beach, Calif. – April 10, 2016 – Formula DRIFT presented by BlackVue returned to Long Beach for the kickoff event of the 2016 Pro Championship season. Chelsea Denofa in the BC Racing / GT Radial BMW earned his first ever Formula DRIFT victory to start the season at the top of the standings.

Round 1: Streets of Long Beach kicked off the new season in dramatic fashion. The volume of rain, the variable surface conditions of the street course, which made for treacherous conditions in general during Friday’s practice, created a rain delay, which ultimately resulted in the Series making the decision to draw on a provision of the Sporting Regulations that allows the Series to forgo Qualifying in the face of inclement weather. Drivers were placed into the Top 32 bracket based on their 2015 ranking. The weather held up for the main competition and the drivers were able to give the fans a great showing to start the season.

"The weather definitely added a challenging element to this event, but the action was as intense as ever to kickoff the season," said Jim Liaw, President of Formula DRIFT. "Despite the rain, the fans came out to show their support. This season is already shaping up to be one of the most exciting and for the local fans we will keep things going with the Super Drift competition next weekend under the lights during the Long Beach Grand Prix."

Returning champion and winner of Round 1 in 2015, Fredric Aasbo in the Rockstar Energy / Nexen Tire SR by Toyota tC battled through some car issues to meet Odi Bakchis in the Ark Performance / Feal Suspension / Falken Tire Hyundai Genesis in the semi-finals. Aasbo edged out Bakchis to enter the Finals. The 2015 runner-up Ken Gushi in the GReddy Racing / Nexen Tire SR Toyota 86 faced off against Chelsea Denofa in an exciting battle. Denofa beat out Gushi to face the champion in the Finals, which gave Gushi the third place event finish. With momentum on his side, Denofa out matched Aasbo to take his first ever Formula DRIFT victory. This also marks the first victory for tire supplier GT Radial.

"I'd like to thank everyone that I work with including GT Radial, BC Racing, Turbo by Garrett, and everyone that helped with the car," said Chelsea Denofa, winner of Round 1: Streets of Long Beach. "We have been working on this for so long and so hard and through mechanical failures to finally be able to work together and push through to get on the top."

The 2016 Formula DRIFT Pro Championship will continue to Round 2: Road to the Championship on May 6-7 at Road Atlanta.