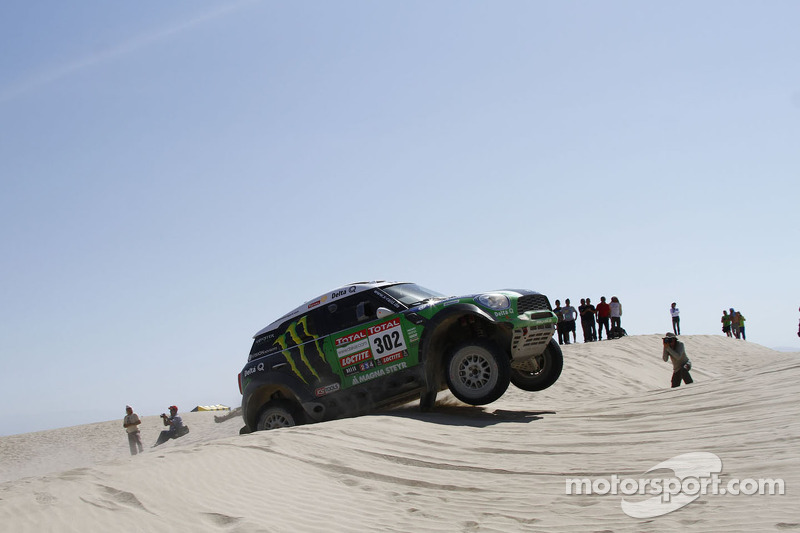 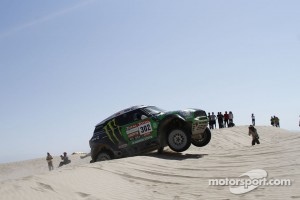 Once again, the drivers were really exhausted when arriving at the bivouac as today’s 275-kilometre special stage featured another heavy dose of the Peruvian dunes. “These dunes were extremely tough,” said Novitskiy’s navigator Schulz. “Here, you realise that the Dakar is a truly gruelling event.”

Sometimes, the good things happen just out of the blue. Peterhansel hadn’t planned to win the special stage but then, it just happened. “I had set myself the goal to just defend my lead in the overall standings but it goes without saying that I don’t say no to this win,” said the Frenchman. “Nonetheless, we mustn’t forget that there is another special stage to be contested, tomorrow. I won’t relax before having crossed the finish line.”

Novitskiy and Schulz also demonstrated once again that dune sections suit them well. Having finished runner-up yesterday, they came third behind Giniel de Villiers’ Toyota, today. The pairing succeeded in avoiding all the ‘traps’ of the special stage and made it to the finish without having got stuck. Thanks to their consistent performance, they succeeded in passing Robby Gordon for fourth position in the overall standings.

Roma, however, wasn’t that lucky, in the dunes to Pisco. “I had to avoid a bike rider and a car that had got stuck,” said the Spaniard. “But then, I drove into a hole and got stuck myself.” Fortunately, his Portuguese team-mates Dos Santos and Fiuza soon approached to help him. “I was happy that they were behind me,” admitted the Spaniard. Nonetheless, this incident cost him more than 20 minutes compared to his team-mate and overall leader Peterhansel.

Despite having helped Roma /Périn, the Portuguese pairing finished sixth. “Getting Nani out of the hole was hard work,” revealed Santos. “Apart from that, our special stage was rather uneventful.” For Holowczyc, however, the Peruvian dunes turned out to be a far more difficult area. The Pole got stuck once again. “It was a day of digging, digging, digging,” said Holowczyc who consequently had to settle for coming 12th.

Meanwhile, the two Russians Alexander Mironenko and Sergey Lebedev in their BUER BMW X3 CC encountered no problems in the dunes and finished ninth – two positions ahead of the Chilean-French crew Boris Garafulic / Gilles Picard with the Vision Advisors BMW X3 CC. “We got stuck at the same place as Nani,” said Garafulic. “I have to admit that Peru is clearly more gruelling than Chile.” The two Germans Stephan Schott and Holm Schmidt had to cope with another dose of bad luck. An opponent was going backwards as he had got stuck – and crashed into the Germans’ KS Tools BMW X3 CC. So, Schott had to wait for the X-raid race truck to be able to repair the damage. He still is on his way to completing the special stage.

The distance of tomorrow’s final stage amounts to just 29 kilometres but the drivers will have to cross another two – minor – dune fields. So, the fat lady has not yet sung. A short time after having arrived in Lima, the competitors will roll over the podium.