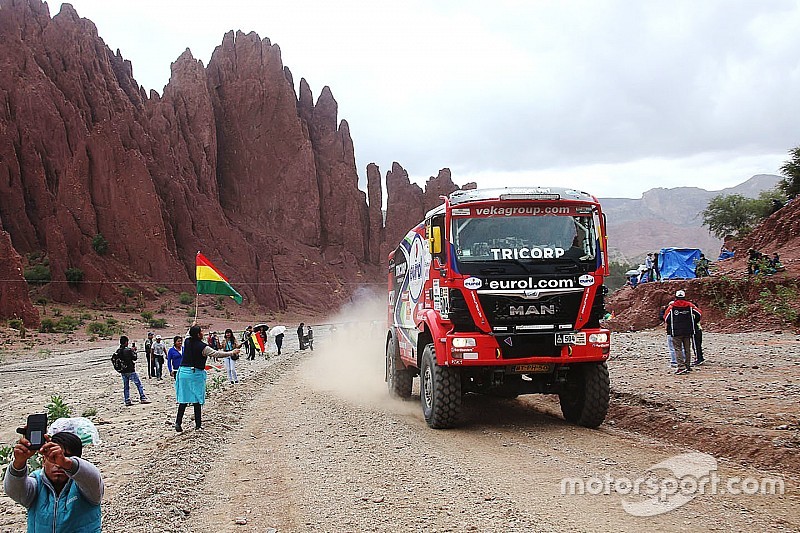 Former Dakar Rally trucks champion Hans Stacey has blasted the 2017 running of the event, as he labelled it the worst he's ever taken part in organisationally.

Stacey, who drives for the Eurol/Veka MAN team, had dropped from seventh to 13th overall in the truck category after losing two hours to a gearbox issue during Tuesday's Uyuni–Salta stage, and was to start Thursday's Chilecito–San Juan stage down the order as a result.

The top runners in Dakar's car and truck categories are allowed to request re-positioning up to three times in the rally, so as to be moved ahead of normally slower cars – and 58-year-old Stacey was angered as an apparent mix-up left him unable to start in the arranged spot.

“[Wednesday] evening we came into the bivouac after an 1100km road section, and we got the list, we had to start [as] the 99th car,” Stacey told Motorsport.com.

“At the end they told me 'okay, we made a mistake, we forgot to put you in'. I was allowed to start 12th, behind the Kamaz. We got out of the bivouac in time, as planned, after the Kamaz.

"We did 160km to the start [of the stage], we were ready to start - helmet, HANS system, balaclava, everything. And then they go: 'Stop. You're not allowed to start.'

“My navigator [Jan van der Vaet] and my mechanic [Hugo Kuppen], he speaks French, we had about 20 minutes of discussion. The Kamaz started - and at that time, of course we had a time card from the organisation, [with our] starting time.

"The time started rolling, but after 20 minutes of discussion, we were not allowed to start.”

After an argument, during which he put his truck in the middle of the road before yielding, Stacey could not get the matter sorted on-site and decided to head out, retiring from the competition.

“They wouldn't do anything. I said there's no use, we decided it's too dangerous," the Dutch veteran, who won the event in 2007, continued.

“We got out of the way, and then we were an hour away, the organisation called us... 'You're allowed half an hour after the last car'.

"But they don't understand the speed of the leading trucks is so high, especially in the sand section - and they [other competitors] don't expect me anymore, also the spectators don't expect, it's even more dangerous.

“Now they want me to come to them, they want to apologise, but my rally is gone.

“I'm angry, I can cry - I never cry, but especially for my four mechanics and my cabin crew. I've trained for half a year, eight hours a week. It's a very expensive sport to do. What's there to say?”

Eurol/Veka MAN team boss Marcel van Vliet told Motorsport.com: “We arranged it even on Tuesday afternoon, before the stage was cancelled.

“He [Stacey] won this stage last year, so he knows this stage quite well. We had some bad luck a few days before, he was really eager to win it. And that's been taken away, this chance.

“It's a mistake that's difficult to rectify. It's ruined the rally especially for Hans, he was driving really well. It was an important rally for him, and it's a pity that it probably has to end this way.”

For Stacey, the starting order mix-up proved the last straw in what he already felt was a poorly-organsed event, and reserved particular criticism for the event's Bolivian leg.

“I will not accept an apology, because it's too commercial - they made us drive to La Paz only for the money. [Dakar founder Thierry] Sabine would turn in his grave. It was about sport, not making money - and now it's all about making money for the organisation.

“And I don't know, this year, this 12th Dakar, it's the worst organisation I've ever had in one rally, even in a small rally.”

Ahead of the Friday stage, the Dakar organisers had Stacey reinstated within the truck category classification, writing him in a nominal time for the missed Thursday test.

He finally completed the event in ninth, just under four hours down on Kamaz driver Eduard Nikolaev, who took his second trucks title.

Sunderland “cried like a wimp” after clinching Dakar title