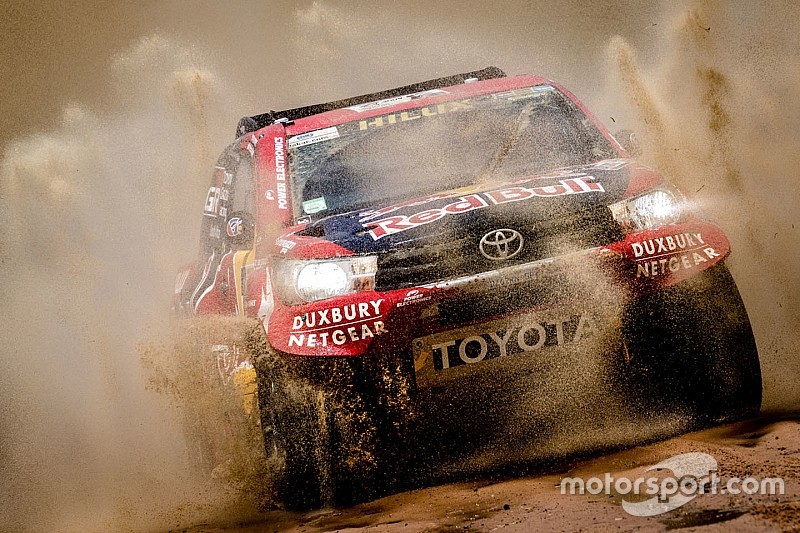 Toyota's Dakar frontrunner Giniel de Villiers says the Japanese marque's woes on Wednesday, when its lead cars all suffered major issues, has served as a reminder of the rally's “cruel” nature.

Heading into the Tucuman – Jujuy test, Toyota had three cars within the top five – and at halfway point of the test, it looked set to take the lead with Nasser Al-Attiyah.

Reflecting on Toyota's day, de Villiers told Motorsport.com: “This is how it goes at the Dakar. This race can be so cruel – one day you can have everything going right, and the next day can be completely turned on its head.

“And that's what happened today unfortunately for us – but we won't give up, we'll keep on trying, there's still 10-11 days to go. So, a lot can still happen.”

Toyota's woes were particularly frustrating as they'd occurred on a day where the Hilux had arguably looked stronger than expected, given the high altitudes.

“I think the car was working quite well. You could also see, Nasser was going at a really good speed today – until he had his crash, unfortunately,” de Villiers said. “It shows that the car is really working at altitude now. We put a lot of effort to achieve that and it looks good.

“It's a pity about the [fuel pump] problem, otherwise we would've still been in with a fight. Thirty five minutes off the lead, the race is still long – but you don't want to lose that amount of time against strong competition like this.

“In all my years that I've been doing Dakar, 35 minutes has been somewhere on the podium. If not second, [then] third – but mostly second. We just can't afford to make any more mistakes – but we've still got a chance to make the podium.”

“Game over” for Al-Attiyah

Having lost more than two hours after his accident, Al-Attiyah conceded his third Dakar win will have to wait until 2018 at earliest.

“Game over,” the Qatari said. “It was bad luck. We hit the other side on big stone and we broke the wheel completely.

“It was a mistake, but a mistake is a mistake, you know. It's bad luck, but this is the race; this is how the Dakar is, you know. We were doing a really good job, we were leading, but there you go.

Meanwhile, Roma, who was the least affected of Toyota's top contenders, told Motorsport.com: “I feel have been saved by the bell. It is part of this competition. Sometimes you have to suffer. We'll try to be better tomorrow.

“Basically it has been an electrical issue. The car entered in a safe mode and we couldn’t make it work. We tried to repair it, to change a thousand things. But it didn't move. We stopped again and changed some things and finally it started to work better.”