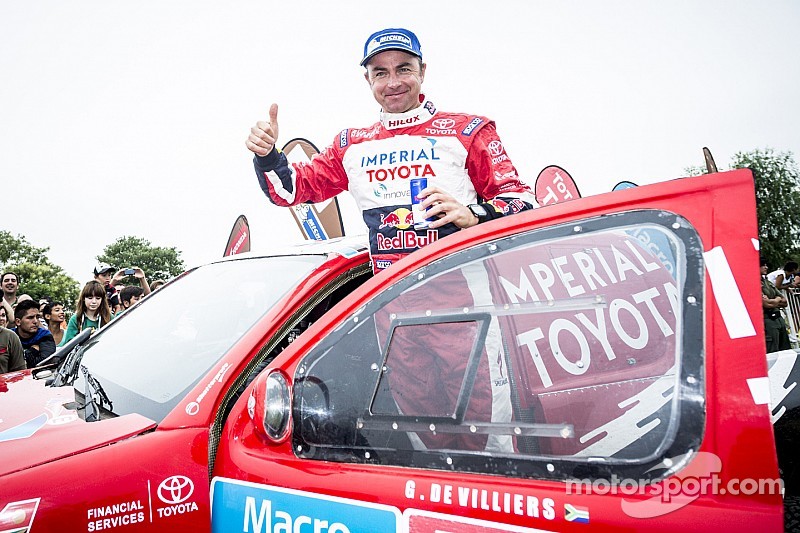 Buenos Aires – Overdrive Racing and Hallspeed enjoyed another demanding and exciting Dakar Rally and managed to bring three Toyota Hiluxes to the finish of the world’s most difficult cross-country rally in second, sixth and seventh overall.

For us, the navigational mistake a few days ago cost us the win...

De Villiers has now finished second on two occasions and third and fourth in his four Dakar appearances with the Toyota team and is the most consistent of any of the current crop of drivers. Qatar’s Nasser Saleh Al-Attiyah claimed his second Dakar victory by the margin of 35min 34sec, while American Robbie Gordon won the final stage.

“For us, the navigational mistake a few days ago cost us the win and we just decided to drive through the last couple of stages. There was no point in taking risks,” said De Villiers. “It’s a great relief to make it to Buenos Aires.”

Frenchman Christian Lavieille and his 2002 Dakar Rally-winning co-driver Pascal Maimon slipped from fifth to sixth overall on the penultimate special stage and trailed Russian Vladimir Vasilyev by just under three minutes at the start of the final 174km sprint from San Nicolás de los Arroyos to a finish in Baradero.

Heavy rain had forced race officials to stop the motorcycle and quad stage at PC2, after 101km, and the decision was taken to call a halt to the car special at PC1, after just 34km. Lavieille recorded the 13th quickest time and finished the rally in sixth place.

Dutchman Bernhard Ten Brinke and Belgian co-driver Tom Colsoul continued to improve as the race progressed and actually led the penultimate stage after 120km, before finishing the special in fifth place. They reached Buenos Aires in seventh overall.

Kazakh Bauyrzhan Issabayev and Russian team-mate Vladimir Demyanenko produced an impressive and consistent display of driving to reach the finish in 17th overall in their Overdrive Racing Toyota.

Leeroy Poulter and fellow South African co-driver Robert Howie drove the second Toyota Imperial car. Early rally problems cost them the chance to challenge for a top 10 finish, but Poulter dug deep during the second week and climbed back to finish 16th, even setting the second quickest time on the last stage to overhaul Overdrive’s Issabayev.

Pole Marek Dabrowski and Dubai-based British navigator Mark Powell joined together in unfortunate and tragic circumstances before the rally had even started, but the pair bonded well and overcame the loss of several hours with axle and drive shaft problems to bring the Team Orlen Toyota Hilux home in 23rd, despite losing 20 minutes on the final stage.

Lithuanian Benediktas Vanagas and his Belarussian navigator Andrei Rudnitski produced their best ever Dakar display; the highlight being the fourth quickest time on stage 11. They reached the podium in Buenos Aires in 24th.

The French-Canadian duo of David Bensadoun and Patrick Beaulé rolled their Overdrive Toyota Hilux early in the rally, but recovered strongly from that setback and continued to improve as the event progressed. They were classified in 32nd at the finish ramp.

We proved that the Toyota Hilux is a potent force at the very top level of cross-country rallying.

Czech driver Peter Jerie and his experienced French co-driver Laurent Lichtleuchter brought up the rear of the Toyota fleet, but were delighted to complete the rally in 42nd place.

“It was a thrilling and demanding Dakar Rally and I would like to thank my entire team for their hard work and efforts over the last two weeks in South America and in the build up to the rally to get everything ready for an operation of this scale,” said Overdrive Racing’s team director Jean Marc Fortin.

“We proved that the Toyota Hilux is a potent force at the very top level of cross-country rallying. We won a special stage and were challenging for podium finishes all the way to the end.”

Overdrive Racing lost Lucio Alvarez and Roberto Patti early on in Argentina with engine problems and the local crew was joined by the Australian driver Geoff Olholm after he crashed heavily and sustained a back injury on the sixth stage.

Another bitter pill came three days from the end when Saudi Arabian rookie Yazeed Al-Rajhi – who had set an outright fastest time and held third overall for long periods – was forced out of the rally with technical problems in Salta.