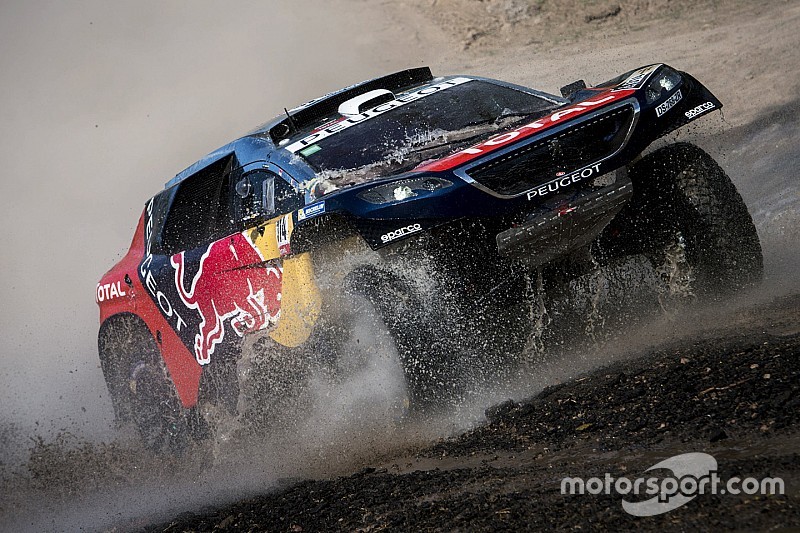 From four competitive categories, each with their own established stars and revelations, Motorsport.com picks out its top 10 performers of the recent Dakar Rally.

Former enduro champion Meo took little time to adapt aboard the works KTM, winning Stages 7 and 11 before losing a likely podium finish with a fall on the penultimate stage. Benavides was no less impressive on his semi-factory Honda, finishing in the top three on no fewer than six occasions en route to an impressive fourth overall.

Paulo Goncalves was also unlucky that a broken radiator - and then a crash that briefly left him unconscious - ruled him out of victory contention, but with just one (inherited) stage win to his name, it seems unlikely the factory Honda rider could have challenged Price on pace.

His compatriot Helder Rodrigues took a while to get going on the Yamaha, but deserves credit for winning a stage on a highly unfancied bike and taking fifth overall.

Among the quads, 2014 champion Ignacio Casale looked a great shout for this year's honours early on, having established a decent lead from the get-go - only for his victory bid to be derailed by an engine failure and then a serious crash the day after.

Just barely missing the cut for the list, South Africa's Brian Baragwanath was a revelation of the 2016 race. Baragwanath took until the fourth day to pick up a maiden stage win and remained consistently quick throughout the rally despite penalties and costly stoppages, eventually snatching the podium from the consistent Sergey Karyakin on the final day.

A special mention should be reserved for Alexis Hernandez, who won two stages on the trot and looked set to challenge for victory, only to eventually lose a ton of time and fall down the order.

In the car category, Giniel de Villiers put in a typically workmanlike performance to bag the bottom step of the podium in a Toyota lacking in power compared to its rivals. Given the limitations of his machinery, it's hard to see how he could have finished higher.

His less experienced Imperial Toyota teammate Leeroy Poulter also proved mightily consistent, beating many more illustrious names to a deserved top-five spot - even if he only managed to breach the day's top three once.

Among those Poulter beat was former champion Nani Roma. For a second year in a row, his hopes effectively went up in smoke on the opening test, and though he took some time to gel with new co-driver Alex Haro, the X-raid duo finished the last four stages inside the top six.

Peugeot's Cyril Despres also had a new co-driver in former rally sporting director David Castera, and from the very outset it was clear he felt much more at home in 2016 than he did on his four-wheel debut last year. A podium position could well have been possible without a costly turbo failure.

The truck category saw one of its most competitive races with five different manufacturers taking at least one stage victory. Still, Kamaz was a constant presence at the sharp end of the field, as Ayrat Mardeev completed a consistent run to secure second place.

His teammate Eduard Nikolaev won three stages and was less than two minutes behind Gerard de Rooy at the halfway point before losing three hours in Stage 10.

Hans Stacey was close to retirement after a disappointing rally last year; instead he returned and kicked off by trading the lead with teammate Peter Versluis for most of week one before falling out of contention.

Even though it was his 11th Dakar, Pascal de Baar was a new name at the front as he secured a surprise maiden stage win for both himself and Renault to take sixth overall.

Villagra's performance on the trucks' first run in Dakar 2016 proved a microcosm of his entire rally – extremely quick from the get-go, only to lose time in the second half. Not unexpectedly, it was the WRC-style week-one stages where the Argentine prospered, given his considerable previous experience in, well, the WRC.

But his effort should not be overstated. For Villagra, this was the first Dakar in a truck and he aced it, running up front when he could and avoiding major trouble when the frontrunning speed wasn't there. He recorded no stage wins, but he did lead the rally after Stage 5 – and managed to hang on to a podium despite the loss of 50 minutes on Stage 10.

If IVECO wants to establish itself as Kamaz's equal for years to come, Villagra needs to return again and again.

Yes, he was quite fortunate that Casale exited the rally on Stage 6 and, yes, Baragwanath and Hernandez were frequently on-pace with the vastly more fancied Argentine.

But when push came to shove, Marcos Patronelli proved much quicker than everyone but his brother Alejandro – and while the duo decided not to fight each other, Marcos would've been a likely favourite in a head-to-head battle.

The Patronellis are unlikely to kick off another four-year victory streak – their rivals are getting quicker and quicker. But for now, they are still the best there is and Marcos did an excellent job of driving that point home in the 2016 edition.

Al-Attiyah expected Toyota to be his biggest obstacle on the way to a third Dakar win and he was very wrong, instead forced to watch as the Peugeots gained minutes on him day after day on week one.

To the Qatari's credit, he was usually best of the rest and did a stellar job of keeping his losses to a minimum, before striking back in the more traditional week two.

Despite a disadvantage in terms of raw pace, Al-Attiyah remained in contention for victory before a roll on Stage 10. His Mini picked up serious damage, but survived intact enough to claim the runner-up spot.

By his own admission, he's now a Dakar free agent – and there isn't likely to be anyone better on the market.

Even KTM's staunchest fans won't argue that Honda's Barreda deserved so, so much better from Dakar 2016 than what he got – a mechanical issue that took him out of contention, for a second year in a row.

This time it was an engine failure, ending the Spanish rider's victory bid after he had topped three of four previous stages, albeit subsequently giving up two of the wins so as not to start first on the road on the following days.

There's still no better rider/team combination to challenge KTM's ceaseless Dakar dominance. Shame that a proper challenge will have to wait at least another year.

Arguably the biggest draw of the 2016 race, the rallying legend did not disappoint on his Dakar debut. Far from it, in fact – while Loeb promised a learning rally, him topping four stages showed he was not taking it easy.

He was second to none through week one's WRC-style stages, but was caught out right away on the dunes, suffering a very costly roll. Even without it, though, it probably would've been a tall order for him to keep up with his more experienced teammates.

If he sticks with cross-country rallying, he'll be a Dakar winner in no time. The desert will come to Loeb soon enough and, as for the roads, he's already as good there as anyone can hope to be.

The highs of Hirvonen's Dakar debut paled in comparison to those of perennial rival Loeb – and yet him finishing ahead is arguably representative.

While the Peugeots were in another timezone early on, Hirvonen did often challenge Al-Attiyah for the top spot among the X-raid Mini contingent – and, surprisingly, he didn't really drop off when dunes and navigation came into play, probably in no small part due to his veteran co-driver Michel Perin.

He got lost on Stage 10 and dropped more than half an hour, which likely stopped him from finishing overall runner-up – but rebounded immediately, placing in the top three in all three final tests.

The Finn has proven a brilliant acquisition for X-raid and is already a force to be reckoned with in the off-road category.

An early technical issue that cost him precious minutes did well to mask the fact that Sainz was every bit as quick, if not quicker, than his Peugeot teammates through the road stages.

And when Loeb dropped out on the dunes, it seemed like a straight fight between him and Stephane Peterhansel – a fight that was see-sawing all the time and was certainly far from decided right until Sainz's gearbox gave up the ghost.

A fourth retirement in a row is very harsh on El Matador, and rumours of his impending retirement have already started popping up, but he still seems keen and certainly still has the speed to challenge.

The 2016 race saw de Rooy deliver a rare defeat for Kamaz in Dakar – and one the Russian manufacturer admitted was fully deserved.

The Dutchman was very unhappy with the road stages of week one, even despite the fact he never really dropped far off the lead – and when week two's desert stages came along, he delivered a swift blow to the opposition, establishing a huge lead in three stages.

The IVECO was clearly a great truck to have, but de Rooy himself was basically faultless, which was amply demonstrated by his winning margin of more than 70 minutes.

Kamaz will need to improve in a big way to stop him from winning again next year.

It would be only fitting that Peugeot's most complete Dakar driver emerge victorious among their star-studded 2016 line-up. And Peterhansel is nothing if not complete - reliable, quick on all types of terrain and extremely motivated.

In a way, the Frenchman didn't seem to command the same level of admiration as Loeb or Sainz from the Dakar fanbase, which is unfortunate as he once more proved he's the finest competitor in the rally's history.

The unfortunate matter of the X-raid appeal still hangs over his victory, but given that the relevant rule over his questionable mid-stage refuelling appears to have been rather poorly defined, it would be a massive shame if this cost him a milestone 12th Dakar win.

Peterhansel – and his veteran co-driver Jean-Paul Cottret, who appears to have given him the edge on the crucial dune stages – certainly earned it.

With Coma and Despres retiring, KTM looked set to finally give up a 15-year stranglehold on the Dakar Rally. But Price clearly had different plans.

Even if Barreda hadn't suffered an engine failure, even if Goncalves escaped mechanical woes and even if Ruben Faria didn't record an early retirement, it's hard to imagine Price being beatable in 2016, so relentless was the Aussie in the latter days of the rally.

His five stage wins are more than what any other competitor achieved in any category and a final 40-minute lead over his nearest rival - the ever-consistent Stefan Svitko – is a pretty good indicator of Price's sheer pace.

Honda, Husqvarna and Yamaha have all shown they mean business in Dakar but, with Price at the helm, KTM still appears as strong as ever.

Despres "hopeful for the future" after Dakar 2016 performance