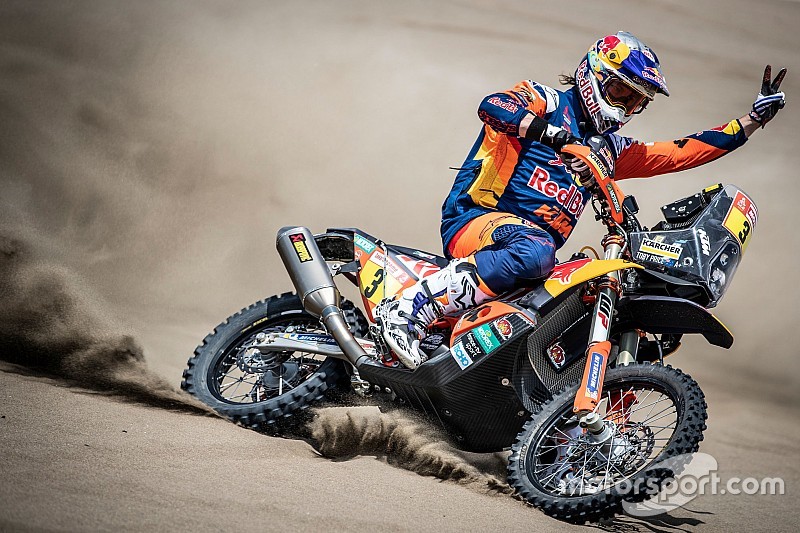 Dakar winner Toby Price is set to go under the knife today to repair significant damage that was done to his broken wrist while in the Peruvian dunes.

The KTM rider tackled the gruelling Dakar just weeks after breaking his right scaphoid during training and undergoing surgery in Barcelona.

While the initial surgery was successful, the strain of riding through the dunes for that long before the injury was properly healed has led to more damage, centred on a screw that's now worn through the bone.

That means a trip straight to the operating theatre for Price, Dr Steve Andrews explaining both the damage and the recommended fix in a video posted to the rider's social media today.

"They fixed the broken scaphoid five or six weeks ago, and it looks like it had all gone back together reasonably well," explained Andrews.

"Unfortunately the load of you riding in that timeframe has put a fair bit through the hole that the screw's gone [through] in your scaphoid. It's started to collapse, it's not healing, and the distal end of the screw is starting to windscreen-wiper and cause a big cavity in the distal pole of your scaphoid.

"It's not going to heal if we leave it there, because it's not well-fixed and it's collapsing into the wrong position.

"What we're going to do is take the screw out, put a new screw through a different angle so we can get some purchase on what bone is still there and good, and we're going to patch some graft in from your hip to encourage it to heal and to fill the hole in the distil part of the scaphoid."

Price complained of discomfort throughout the event, and even had to rig up a makeshift throttle stop to get through the transport stages.

Having referenced needing to see what additional damage had been done during his post-Dakar celebrations, the news of more surgery came as no surprise for Price.

"This is not what I wanted to hear, but I was expected something along these lines," he wrote on the social media post accompanying the video with Dr Andrews.

"I'll be heading into surgery today, but hey, I got the Dakar won on it, so it was worth it I think!"