Third win for Mini's Roma and Périn on stage 12 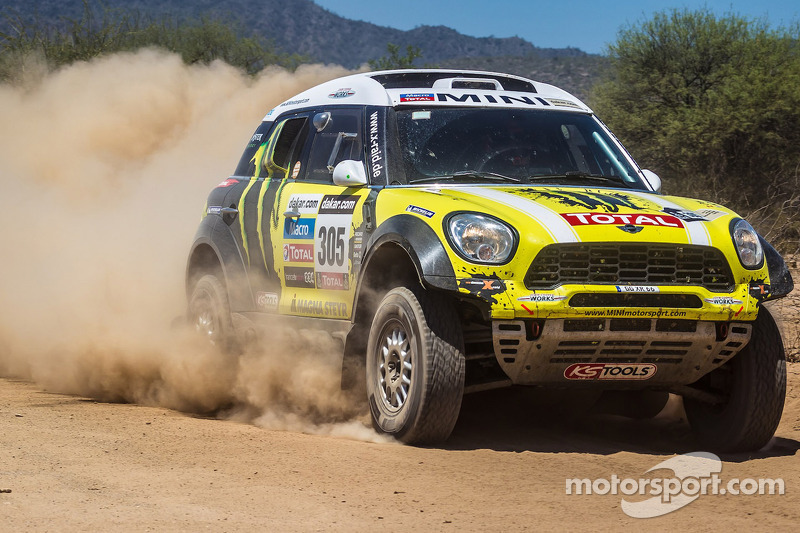 Stéphane Peterhansel: “Another day less to go”. Just two more days to go to the finish in Santiago.

The distance to Santiago is reduced day by day – just another two days to go to the relieving final finish line. The tension in the Monster Energy X-raid Team increases day by day and for Stéphane Peterhansel (FRA), every single kilometre covered represents a major relief. Now, the Frenchman also successfully conquered the dunes of Copiapo. Together with his French navigator Jean-Paul Cottret, he took his green MINI ALL4 Racing to fourth position, thus losing just about three minutes of his lead over second-placed Giniel de Villiers. Meanwhile, the promising position in the battle for the overall win wasn’t the only thing making the Monster Energy X-raid Team members happy: After all, Nani Roma (ESP) and Michel Périn (FRA) celebrated their third stage win in the 2013 Dakar Rally, in the 12th stage, from Fiambala to Copiapo. 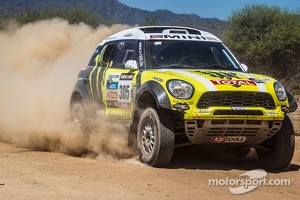 Due to the chaotic conditions encountered yesterday, Roma had to start into today’s special stage behind five trucks. “Once again, I had to eat a lot of dust and at the same time, I also had to be careful to avoid hitting any rocks,” reveals the Spaniard. “But in the desert, we could make full use of our skills. Roma worked his way up step by step – until he suffered a puncture with just three more kilometres to go. But he opted for continuing without changing the tyre. “I definitely don’t stop that close to the finish,” says the Spaniard. “Fortunately, the off-road section was completed and so, we made good progress despite the puncture.” In the end, the yellow MINI ALL4 Racing proved to be unstoppable, today, and set the fastest time. In the overall rankings, Roma gained another position and holds third place, now.

Peterhansel and Cottret encountered a moment of stress, in their green MINI ALL4 Racing. “We got stuck,” says the Frenchman. “So, we had to reduce the tyre pressure and use the sand ladders to work our way out of the sand.” Due to the reduced tyre pressure, the pairing had to complete the following, rocky section at reduced speed to avoid a puncture. “Consequently, we lost three minutes of our lead over Giniel but that’s okay. And now, there’s another day less to go.”

Argentinean Orlando Terranova and his Portuguese co-driver Paulo Fiuza finished fifth, with their BMW X3 CC. “At first, Paulo made a mistake and then, it was my turn,” admits Terranova, “And these mistakes cost us valuable minutes.” The Russians Leonid Novitskiy and Konstantin Zhiltsov took their orange MINI ALL4 Racing to ninth position, with Boris Garafulic (CHI) and Gilles Picard (FRA) finishing 18th.