Terranova shines as De Villiers inches closer to the lead 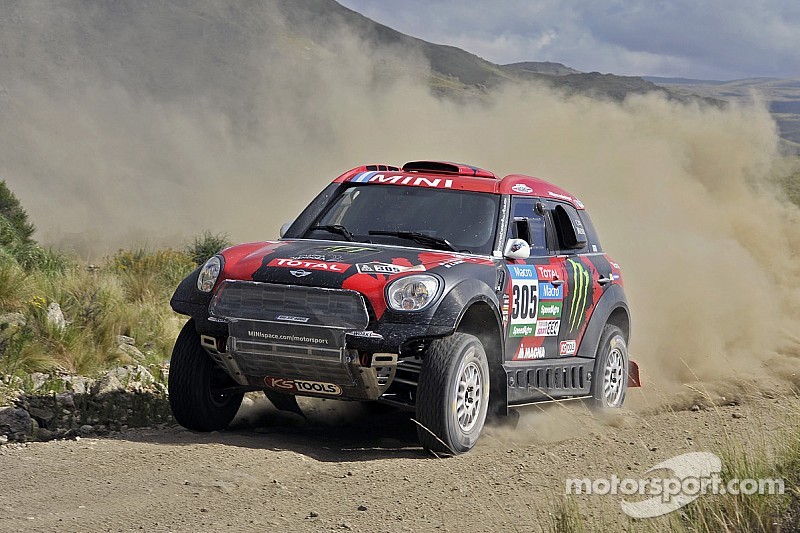 No longer in contention for the general classification, Orlando Terranova was free to go all out between Iquique and Uyuni to claim his third stage win since the start of the race in Buenos Aires. Giniel de Villiers, on the other hand, clawed three minutes back from Nasser Al-Attiyah and increased the pressure on the Qatari.

Orlando Terranova will long remember the fourth stage of the 2015 Dakar, when the Argentinean was knocked out of the fight for the general classification after showing he had the speed to challenge for victory in Buenos Aires. His dominant win today, the third one in seven stages, was just another flash of brilliance by the Mini driver, head and shoulders above the rest in Uyuni. Runner-up Yazeed Al-Rajhi was busy defending his third place in the general classification.

The Saudi, who finished 2′20″ behind the winner, can say "mission accomplished" after even managing to take back time on the overall leader, just like Bernhard ten Brinke and Krzysztof Hołowczyc, who are engaged in a titanic battle for fourth place in the provisional classification after posting a solid performance to finish less than three minutes behind the winner.

Giniel de Villiers, 6′50″ back, also has reasons to be pretty happy about today's stage. The South African managed to erase the three-minute gap between him and Nasser Al-Attiyah after starting behind the Qatari. A great move that will keep the pressure on the Mini driver, who admitted on the finish line that he had suffered from altitude sickness and had stopped several times during the special Stéphane Peterhansel set a blistering pace at the start but faded to finish a disappointing eighth, ten minutes behind the winner and five seconds ahead of Robby Gordon.

Meanwhile, in the truck category, Aleš Loprais (Man) produced his best performance in this edition to claim the seventh stage with over five minutes to spare on Gerard de Rooy. Today's victory also propelled him to fourth place in a general classification which was shaken up by leader Eduard Nikolaev's misfortune. His Kamaz teammate Ayrat Mardeev picked up the leadership after finishing sixth in Iquique.