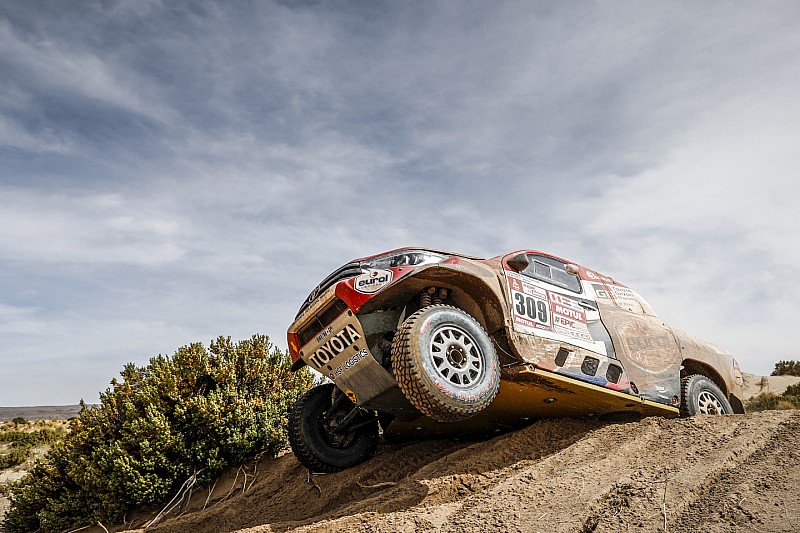 Ten Brinke was the pace-setter for most of the day's running en route to wrapping up his second stage win in the Dakar – his first having come in the short opening test in the 2016 marathon.

Peugeot's Cyril Despres was the Dutchman's nearest rival on this occasion, finishing 4m35s off ten Brinke's pace through the 281km timed special of the Belen – Fiambala – Chilecito stage.

Despres' teammates Sainz and Peterhansel, first and second in the general classification, propped up the top four on the day.

The Spaniard had taken the early initiative in their Wednesday battle, and was at one point over three minutes up on Peterhansel's pace, but gave up that advantage towards the end of the stage.

He did beat Peterhansel at the finish, but only added 10 seconds to his lead over the Frenchman.

Former WRC star Mikko Hirvonen was quickest at the two opening waypoints, and looked in with a chance of giving the all-new X-raid Mini buggy its first stage win.

However, an incident 107km into the route put paid to the Finn's challenge, forcing a lengthy stop for repairs.

With 1012km of timed competition left across the three remaining stages, rally leader Sainz is 50m45s up on Peterhansel as the pair chase the honour of scoring Peugeot's farewell victory

Al-Attiyah remains best of the rest behind the duo, one hour and 14 minutes down on Sainz.

Nikolaev had been at the front of the rally from the second day onwards, but now trails the Argentine after surrendering more than 40 minutes in the Belen - Fiambala - Chilecito stage.

MAZ driver Siarhei Viazovich, third in the overall standings, won the stage, his first in the Dakar Rally.

Villagra and Nikolaev are now separated by 16 minutes, with three stages left to run.