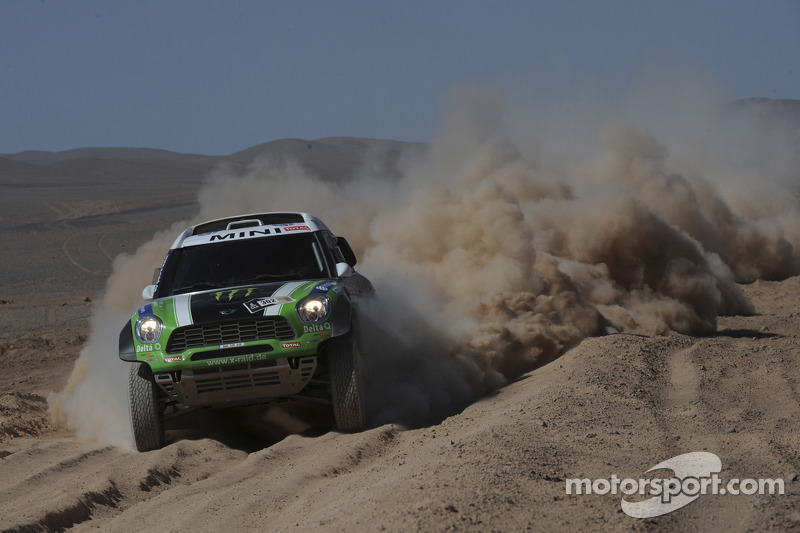 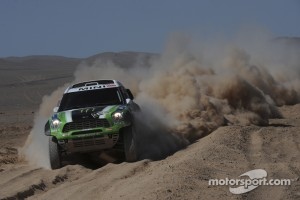 Since the 2012 Dakar Rally was started 10 days ago in Mar del Plata, Argentina, the Monster Energy X-raid Team has been holding the overall lead on every single day. And in today’s special stage, Stéphane Peterhansel and his navigator Jean-Paul Cottret (both France) once again succeeded in defending their overall lead for the Trebur based team by taking their green Monster Energy MINI ALL4 Racing to second position behind Robby Gordon. Spanish-French pairing Nani Roma / Michel Périn kicked-off today’s special stage, with their yellow Monster Energy MINI ALL4 Racing – and finished third.

Today’s special stage once again was split into two parts: the first featured a distance of about 400 kilometres, the second’s distance amounted to 90 kilometres – and they were split by a 129-kilometre liaison section. Several problems, such as heavy rain and construction sites, forced the organisers to subject the road book – at short notice – to several alterations. The track itself once again featured numerous rocky sections. “Nonetheless, driving today was nicer,” said Peterhansel. “The first part of the second section was particularly technical – it definitely was big fun.” Only in the closing stages, the drivers had to cope with a short section with sand and dunes.

Although Peterhansel once again didn’t get much of the sand he would have preferred, he defended his lead in the overall standings by finishing runner-up. And he did so although having lost several minutes due to a puncture. “We were power sliding and I saw the stone before we hit it,” revealed Peterhansel. “I hoped we would be able to avoid it but fractions of a second later, there was the bang.”

Having been the quickest yesterday, Roma kept on delivering in great style by finishing third. Gordon succeeded in passing him in the early stages of the first section and from that point in time, the Spaniard was hampered by the US-American’s dust. “We were driving right into the wind and the dust of cloud was enormous,” explained Roma. “This situation cost us several minutes.” Nonetheless, he defended his fourth position in the overall standings.

With just 20 kilometres to go, Holowczyc and Fortin encountered an exciting incident. At a crossing they had taken the wrong turn but the spectators lead them back to the right track. When the Pole wanted to drive onto it, they hit a step and the car rolled onto its roof. “The step was invisible for us,” said Fortin. “Fortunately, we were able to put the MINI back on its wheels to continue, afterwards.” The MINI ALL4 Racing survived the incident virtually unharmed, with a broken outside mirror and a flaw in the windscreen representing the only visible consequences of the adventure.

Portuguese pairing Dos Santos / Fiuza completed the special stage without any major problems but also lost some minutes due to a puncture – and the same applied to their team-mates Novitskiy and Schulz. “The second section went great, for us,” said the German. “Unfortunately, the first wasn’t too good. I think that the special stages today and tomorrow will be tough, for us.”