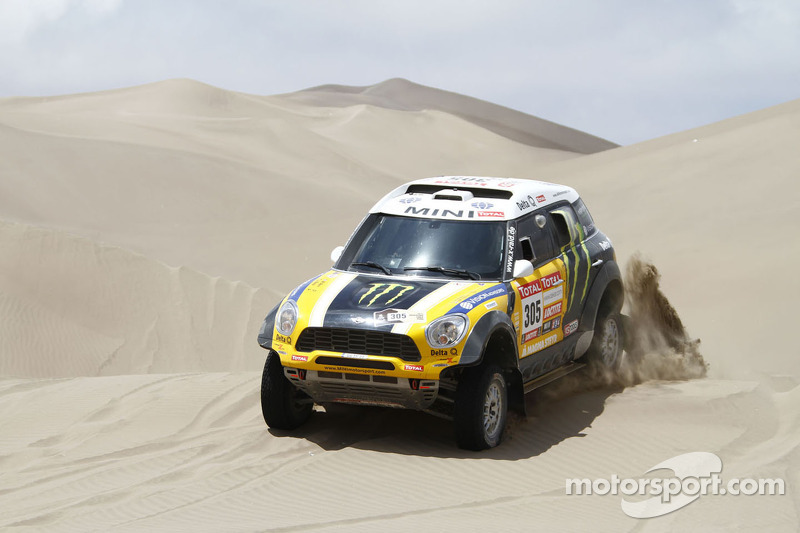 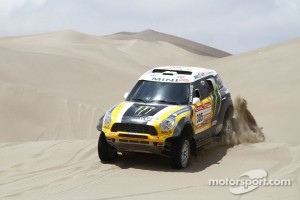 • Stéphane Peterhansel extends his overall lead • All the BMW X3 CC make it to the top 20, today

For Schulz, the navigator of Novitskiy, this special stage turned out to be the most difficult one so far. “Navigating was anything but easy and the dunes also proved to be more difficult than expected,” said the German. At the beginning, the track was fast but covered by a lot of Fech-Fech sand, resulting in loads of dust. And following the hard dune field, the drivers had to cope with another dose of these conditions.

Roma currently is the driver who has secured more special stage wins in the 2012 Dakar than anybody else. Today, he celebrated special stage win No 3. “This success is for my team that is working on my car day for day and extremely hard,” underlined the Catalan. “When it comes to me, I just can say that the fun is getting bigger kilometre by kilometre. That’s a feeling I missed in the past years.” In the overall standings, he re-passed Robby Gordon and is back in second position, now.

Peterhansel also had a nice day. Although he had to settle for finishing second behind Roma, he increased his lead over Gordon in the overall standings to nearly 20 minutes. “But we shouldn’t forget that there still are several days to go,” warned the Frenchman. “Yesterday, we had to witness how fast something can go wrong. We saw Gordon going off in a tight corner and falling into a ditch. We checked if he had somersaulted but he was continuing on his four wheels and obviously had to stop later.”

Novitskiy and Schulz are happy with having finished sixth, in today’s special stage. “In consideration of the fact that this special stage was extremely difficult it’s a fantastic result,” beamed Schulz. The pairing didn’t encounter any major technical problems but lost some time due to the difficult navigation. Right behind them, Portuguese pairing Dos Santos / Fiuza finished seventh.

Polish-Belgian pairing Krzysztof Holowczyc / Jean-Marc Fortin, however, weren’t that lucky. At first, they had to stop due to a broken power steering, thus losing valuable time. Later they gut stuck and when another competitor tried to tow them out, the tow rope broke, hit the radiator and destroyed it. So, they had to wait for the X-raid truck to have the radiator repaired.

The three BMW X3 CC vehicles also secured good results. Chilean-French pairing Boris Garafulic / Gilles Picard who had been in problems, yesterday, made it to the top 10 for the first time. They finished ninth, with their Vision Advisors BMW X3 CC. “We passed a lot of competitors,” beamed the Chilean, “And some of them were trucks. Nonetheless, the Dunes were really tough, today.” The Germans Stephan Schott / Holm Schmidt took their KS Tools BMW X3 CC to 13th position, with the two Russians Alexander Mironenko and Sergey Lebedev in the BUER BMW X3 CC coming 19th. They had the chance of securing an even better result but then, they got stuck in the sand.