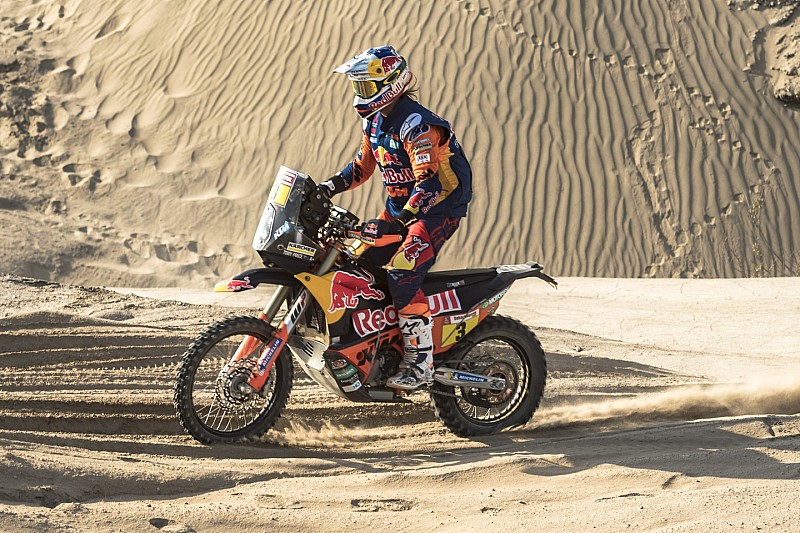 KTM's Toby Price will take a lead of a little over a minute into the deciding stage of the Dakar Rally, after finishing Thursday's stage just one second slower than chief rival Pablo Quintanilla.

The penultimate stage of the Peru-based rally, a loop which started and ended at Pisco, featured a mass start format in which riders commenced the stage in groups of 10.

That meant the top 10 from Wednesday's stage all started simultaneously, and the gaps between them all stayed relatively small until the latter stages of the 313km test.

However, they were surpassed by two riders from the second group at the end of the stage, as Sherco TVS rider Michael Metge came through for a first-ever Dakar stage win by two minutes ahead of Honda privateer Daniel Nosiglia.

Husqvarna rider Quintanilla was best-placed of the contenders for overall victory in third, 3m28s down on Metge, with KTM factory pair Price and Walkner ending the stage on identical times, one second slower.

The result is that Price takes a lead of 1m02s over Quintanilla into Thursday's Pisco-Lima test, while Walkner will start the final stage with 6m35s to make up.

Yamaha's leading hope Adrian van Beveren also began the stage still in realistic contention for overall honours, and was on pace with the leaders until he suffered an engine failure with just 16km of the stage remaining.

His misfortune promotes Husqvarna's second rider Andrew Short to fourth overall, albeit 40 minutes off the lead, while top Yamaha rider Xavier de Soultrait is now the last rider within an hour of Price.

Jose Ignacio Cornejo, the top Honda rider in the classification, gained a position at the expense of Luciano Benavides (KTM), with the pair split by only five seconds in the fight for sixth ahead of the final stage.

The field of potential winners was reduced overnight by heavy penalties for Honda rider Kevin Benavides, who was eighth-fastest on the stage, and KTM's Sam Sunderland.

Cavigliasso on brink of quads title

Nicolas Cavigliasso continued his serene run to a maiden quads class title on the penultimate stage, although his string of stage victories finally came to an end.

Instead, his fellow Argentine rider Manuel Andujar claimed his first stage win of the rally, beating Cavigliasso by a shade under five minutes and third-placed Jeremias Gonzalez by some 20 minutes.

Cavigliasso's lead overall now stands at 1h40m with one stage to go, while Gonzalez has a 24-minute buffer over Gustavo Gallego in the fight for second ahead of the decider.

Peterhansel out of Dakar 2019 in penultimate stage