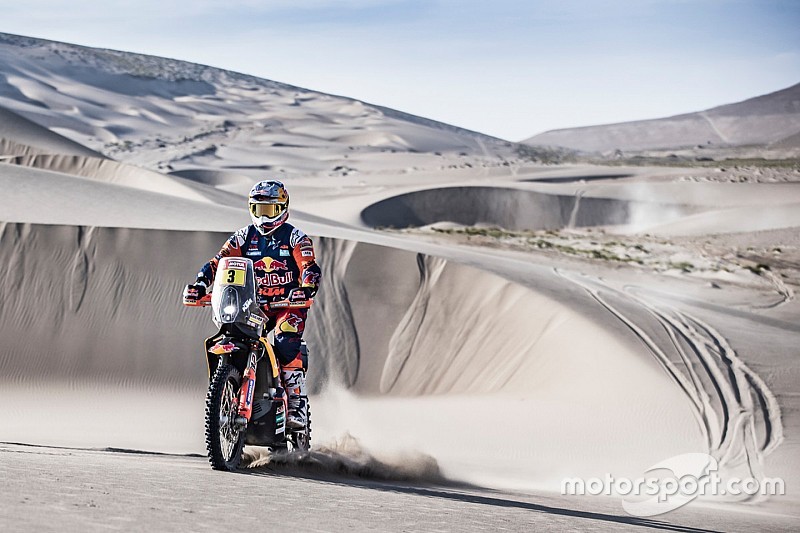 Toby Price became the new leader of the bike class in the 2019 Dakar Rally despite Matthias Walkner beating him to win Tuesday's eighth stage, as Ricky Brabec retired with an engine failure.

Brabec had a 7m47s advantage as Stage 8 kicked off, but his Honda bike had an engine failure only 56 kilometres into the 361km San Juan de Marcona-Pisco run, forcing the American to retire.

He is the third retirement in the factory Honda camp, with Joan Barreda getting terminally stuck on the third day and Paulo Goncalves falling and injured himself two days later.

With that, KTM rider Price is the new leader - the Australian also looked set to take his first stage win of 2019 as he led at every waypoint, only to be demoted by teammate Walkner at the finish.

Another KTM rider, Sam Sunderland, was fourth, but nearly six and a half minutes off the pace, with Andrew Short bringing a second Husqvarna into the top five.

In the overall standings, Price's gap over Quintanilla is just 1m03s with three more riders less than 10 minutes behind with only two stages to go.

Yamaha's Adrien van Beveren started the day second but was unable to keep up with the leaders, and losing 11m48s meant he is down to sixth, 9m54s behind Price.

One of only two remaining factory Honda riders, Kevin Benavides also had a poor day and is now 21m41s away from the lead in seventh.

Dakar veteran Stefan Svitko retired from eighth place, the Slovakian airlifted to a hospital after he sustained head injuries in a crash.

Nicolas Cavigliasso was victorious once more in the quad class, taking his seventh stage win of the event.

Cavigliasso was in a class of his own, and while he lost around eight minutes after the final waypoint, he still won by 9m10s.

Second place was hotly contested between Gustavo Gallego, Jeremias Gonzalez and Alexandre Giroud, with the former snatching the position.

Gonzalez was just six seconds slower in third as his deficit to Cavigliasso in the overall standings is now up to 1h24m52s.