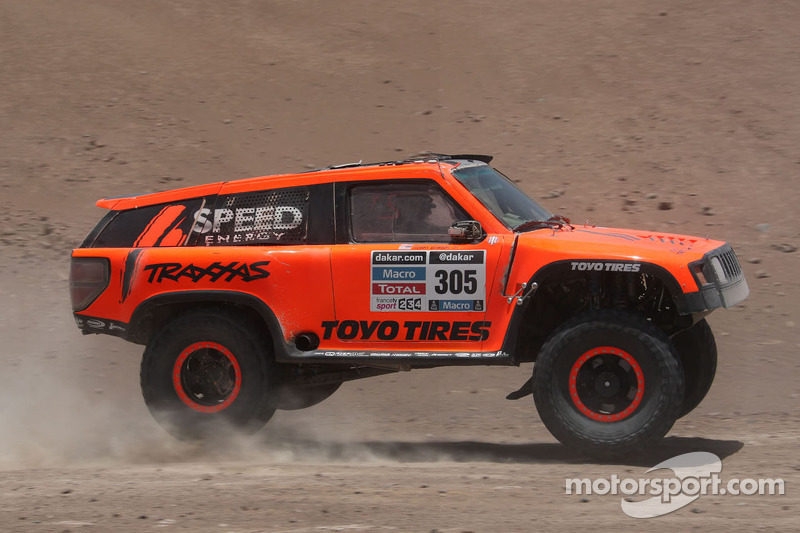 The duo lost precious positions from the leaders and fell out of the top-10.

Iquique, Chile (January 14, 2014) – Tuesday's Stage 9 of the 35th Annual Dakar Rally went extremely well for the SPEED Energy/Toyo Tires HST Gordini until the last checkpoint where Robby Gordon and navigator Kellon Walch would find themselves stuck in the Atacama Dunes after stopping to check on the car’s radiator. Ultimately, the duo lost precious positions from the leaders and fell out of the top-10.

Starting 10th Tuesday allowed Gordon to keep pace with the 4-wheel-drive cars in order to stay within reach of the leaders on the 422-kilometer Special on twisty narrow passes along the ocean. Gordon put on a spectacular show with his vehicle immediately passing five vehicles at the start and remaining in the top five the majority of the Stage and pressuring the front-running Mini’s for the Stage podium. 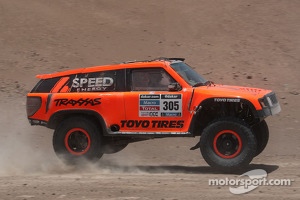 However, bad luck would strike again as Gordon was navigating through the dunes at a blistering pace. The radiator temperature suddenly increased causing the HST Gordini come to a sudden halt just 20 kilometers from the finish. After stopping, the vehicle would then got stuck in the very soft sand ultimately dropped TEAM SPEED out of the top-10, 1 hour and 59 minutes behind Stage winner Stephan Peterhansel.

Through 9 Stages of the 2014 Dakar Rally, Robby Gordon and the SPEED Energy/Toyo Tires HST Gordini sits in the top 20 overall in the standings, having recorded three top-10 finishes and one podium. With only four stages remaining, Gordon will be pushing the SPEED Energy/Toyo Tires HST Gordini hard looking to gain as many positions in the standings as possible while gunning for all four Stage wins.

Wednesday’s 631-kilometer Stage 10 will descend towards the shores of the Pacific Ocean with challenging dunes for the first 200 kilometers of the Special. The second portion of the stage will require drivers to conquer the challenging sections of fesh-fesh leading into the twists and wind of the region’s mine tracks into the bivouac in Antofagasta.