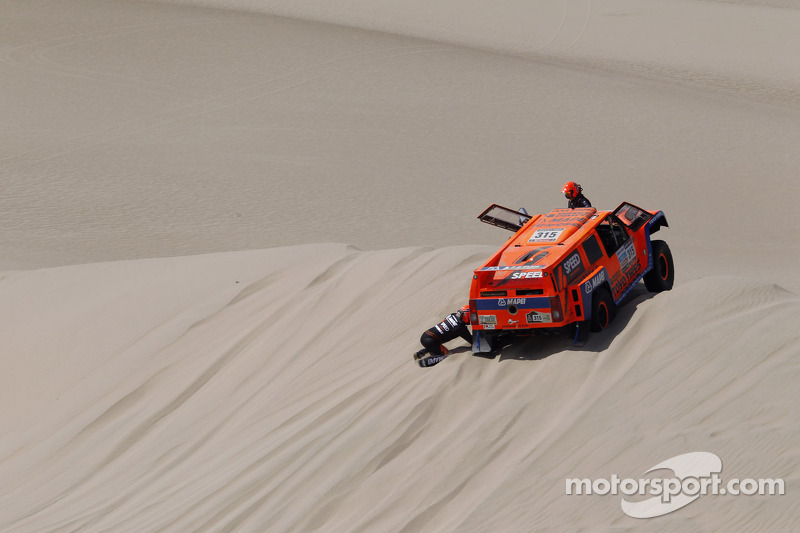 Robby Gordon now has to make up a lost of time after being stuck in a sand dune on the opening day of Dakar 2013.

Piscoe, Peru (January 5, 2013) – Today marked the start of the 2013 Dakar Rally and the first time that it has started in Peru since it moved to South America. The stage went from Lima to Pisco and was complied of a 250-km liaison leading to a very short Special where spectators were able to view the competitors quest to take a spot among the rankings of the elite. Even though the stage is short, the competitors must not forget that this is the start to the toughest off-road race in the world, and the battle has certainly begun. 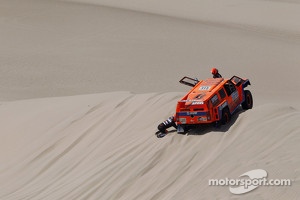 Despite being very prepared for this year's Rally, the race did not begin as well as the SPEED Energy / Toyo Tires / MAPEI team had hoped. Robby Gordon would be taken by surprise on the first day as the stage was not as easy for him as most expected. Gordon got stuck in the sand and broke his transmission, losing valuable time to his competitors. Having no reverse gear made getting unstuck remarkably difficult.

Gordon talked about his misfortune shortly after diagnosing the SPEED Energy / Toyo Tires / MAPEI HUMMER in the bivouac. "I stopped at the top of a dune after Kellon told me to be careful since we could not see the other side, and I was being super conservative. We got stuck and lost the transmission trying to get out. We literally had to push the HUMMER out of the sand. I am down more than I ever was last year on day one, and I can not believe it. We are in bad shape but from here on out we will just have to fight, fight, fight!," said a disappointed Robby Gordon.

After nearly being stuck for 9 minutes, his rivals put him down even more time. Gordon trails leader, Carlos Saniz by 32 minutes overall, which is not the way that the team wanted to start the Rally. The SPEED Team and Gordon know that they cannot make any more mistakes if they want a podium finish when the Dakar Rally ends in Santiago, Chile. If there's a will which there most certainly is, Gordon will find a way.

Heading into Stage 2 tomorrow, the Rally competitors will head only 85-km outside the town of Pisco and head for the dunes, as there will be nothing but sand for a 242km Special. The stage will end back in the same bivouac from Stage 1 making Pisco a home to the competitors one more night before heading to Stage 3. This could be one of Gordon's best chances to gain time on what he has just lost.