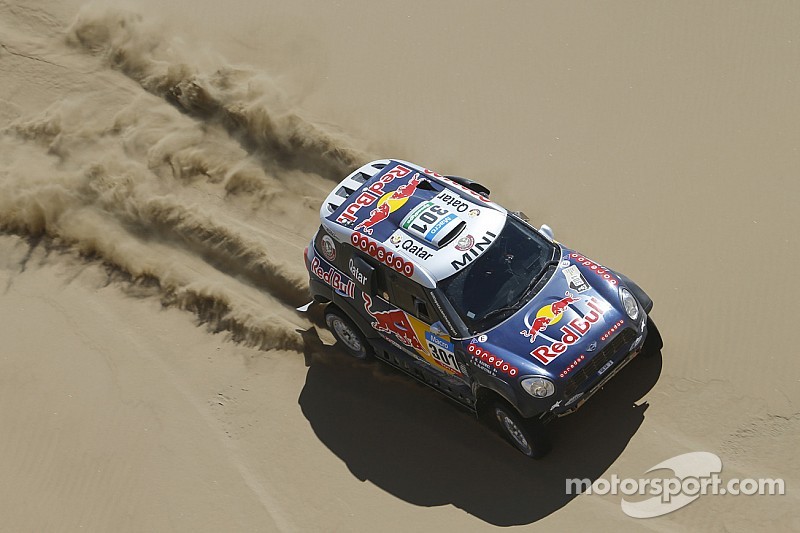 Nasser Al-Attiyah defends his lead in the overall classification ahead of the rest day.

Orlando Terranova (AR) and his co-driver Bernardo Graue (AR) in the MINI ALL4 Racing also posted a strong result on day eight of this year’s Dakar. The two Argentineans finished one place ahead of Al-Attiyah/Baumel in second position.

Four more MINI ALL4 Racing cars were in the top ten on Sunday. Krzysztof Holowczyc/Xavier Panseri (PL/FR) kept there steady pace today crossing the line in fifth position. They defended their fourth place in the overall classification.

Leg eight lead from Uyuni in Bolivia back to Iquique in Chile where the Dakar was on Friday already. Today the drivers completed the second day of the so-called marathon stages. On two days the drivers couldn’t call upon their support teams.

The 784 kilometre-long special stage eight was held on a dried out salt lake called Salar de Uyuni where the drivers were able to go flat out for several hundred kilometres. Later they entered a 274 kilometre-long neutralization section before heading into a 38 kilometre sprint to Iquique at the Pacific Coast.

On Monday the drivers will be able to re-charge their batteries on the rest day in Chile while the teams will be able to set-up the cars for the second part of the toughest rally in the world. There are still five stages to go until the Dakar reaches the finish line in Buenos Aires (AR) on Saturday.

Al-Rajhi mixes it with the big boys