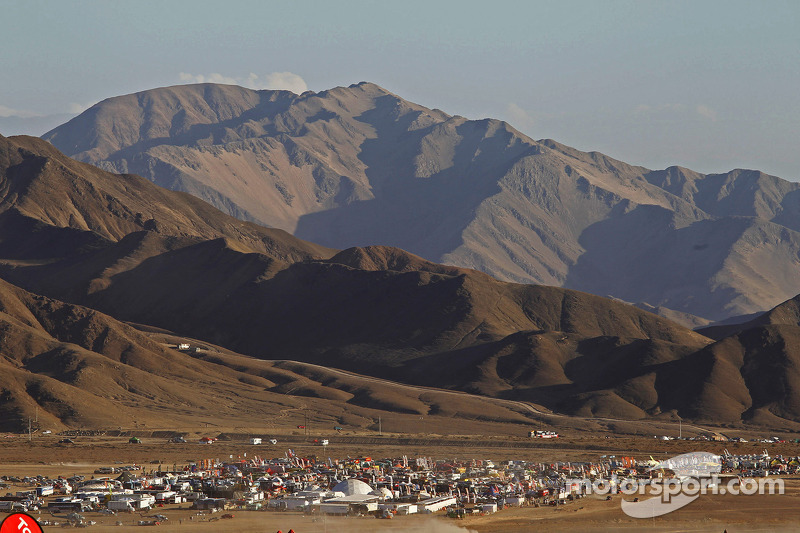 Seven days to go until Lima 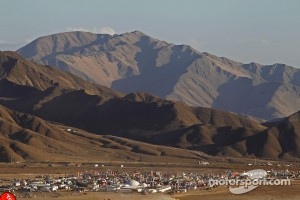 The rest area near Copiapo

125 motorcycles, 21 quads, 123 cars and 71 are still in the running as the rally takes a rest day in Copiapó. Some competitors are still arriving at the bivouac after spending the night on the dunes. Halfway through the race, none of the four titles at stake have been decided, but the list of contenders has been whittled down.

Motorcycles: Despres and Coma in a league of their own

Luckily, there are two of them! Seeing a champion flaunt his superiority in a certain discipline can give rise to either boredom or admiration. Over the last few years, the world of rally raid has been fortunate enough to have two amazing riders who hog the most important race of the year: Cyril Despres and Marc Coma. These two pilots, the fastest and most consistent of all, have taken turns winning the last six editions. After 4,563 km (including 1,632 km of specials), it seems like the race will be decided between them in Lima, unless their struggle ends up scuttling the chances of both of them. Right now, Despres has a margin of 7'48" over his teammate and rival. This is by no means enough for the Frenchman to rest on his laurels, although he has the advantage of being able to mark Coma while not taking too many risks. If he wants to win, the defending champion has no choice but to launch attack after attack – something he is very, very good at.

The first week was especially selective among those who were supposed to make things difficult for Despres and Coma, all of whom openly admit that they are racing for a podium place. Certain riders expected to be vying for glory had to quit early: Jakub Przygonski had an engine breakdown during stage 3, in which Quinn Cody suffered a broken clavicle. Francisco "Chaleco" López, the only rider to win a special apart from Despres and Coma, tore the cruciate ligaments of his right knee at the beginning of the first Chilean stage, which he still managed to finish. But Copiapó is the end of the road for him. Other ambitious riders have cracked, including Frans Verhoeven (26th, 3 h 16' behind Despres) and Alain Duclos (105th, 16 h 30' back). On the other hand, Lady Luck has smiled on Hélder Rodrigues and his Yamaha, who now sit just behind the duo of favourites, 49'39" back. Only another Portuguese rider, Paulo Gonçalves, is less than an hour behind the leader.

Among those making their debut, Brazil's Felipe Zanol (16th) lies ahead of Johnny Aubert (24th), while the classification of those riding without assistance is led by Hugo Payen (82th), just like last year. Only one of the two ladies registered for the 2012 race, Laia Sanz (51th) can still make it to Lima. She could also improve on last year's classification (45th).

Cars: The Minis hold their own against the Hummer threat!

Halfway through the rally, 42'54" separate the top six riders in the general classification, led by Stéphane Peterhansel with an 11'22" margin over Krzysztof Hołowczyc, who won his first Dakar special in stage 5. Two Minis in the Top 2, three of them in the Top 5 (with Nani Roma 18'05" back in fourth) and four different Mini stage winners: one could be forgiven for thinking X-Raid are the only game in town. And yet the race has been marked by the Hummers' performances so far! Robby Gordon lies 13'09" back in third, while the defending champion, Nasser Al-Attiyah, would be in the lead if not for his technical problems! The driver from Qatar won two stages and proved his status as the fastest driver in the rally. He has nothing to lose going into the second week.

Let us not forget the ever-consistent Giniel De Villiers, lurking 34'07" back in fifth despite the fact that his Toyota is still being developed.

The usual duellers in the production category, Jun Mitsuhashi and Xavier Foj are also engaged in a no-holds-barred struggle. The Japanese driver has the upper hand so far, but the Spaniard is only 23'01" back.

Finally, only Pascal Thomasse, the leader of the 2-wheel drive classification, is going into the second week with a comfortable margin: 1 h 26'15" on Bernard Errandonea.

Quad: Maffei and Patronelli, the specialists

30 pilots registered. The three previous winners on the starting line.

Many motivated outsiders. The quad competition was expected to be a titanic struggle, partly thanks to the implementation of new regulations limiting vehicles to 700 cc engines. But a twist of fate changed everything even before the first car had hit the road. The race was thrown into disarray after seven pilots were excluded during scrutineering due to non-compliance of their vehicles with the rules.

Nevertheless, the competition soon got more exciting with a double twist of fate, this time on the race course. The last rider in 2011, Uruguay's Sergio Lafuente, took the first two specials and proved the race was far from being decided. It was not until stage 3 that the Argentinean specialists got back in the driver's seat. Maffei (7th in 2011) and the Patronellis found their lost form and have since hogged most stage wins, with Copetti taking one too. The general classification reflects the battle which is raging on. The race has been led by three pilots so far, namely Sergio Lafuente, Alejandro Patronelli and Tomás Maffei. Marcos Patronelli, who lies 3rd but with a gap of 1 h 20 between him and his brother, can still hope to shine, just like the surprising Argentinean rookie Lucas Bonetto and the young Chilean Ignacio Casale.

Trucks: De Rooy wins but is unable to distance his rivals

An epic showdown is taking place in the truck category, where Gerard de Rooy, in the lead since Chilecito, has been unable to open significant gaps between him and his rivals. At the wheel of a particularly well-equipped vintage truck and with the Iveco team fully behind him, De Rooy Jr has taken one stage after the other (San Juan, Chilecito, Fiambalá, Copiapó), but he has been unable to gap his tenacious rivals.

Ales Loprais and his Tatra, for example, reached the rest day with a time deficit of just 17'10" on the Dutch leader. Although he is escorted by the 2007 champion Hans Stacey, who lies in third place, De Rooy should also keep an eye on the Kamaz triple menace (4th, 5th and 6th).

This is a very open race and, despite the disqualification of the Tatars' leader Eduard Nikolaev for anti-sportive behaviour in stage 4, De Rooy is now playing the role of the hunter hunted, with Artur Ardavichus, Andrei Karginov and Ayrat Mardeev's Kamaz trucks lying between 45' and 1 h 13' away. Fascinating.