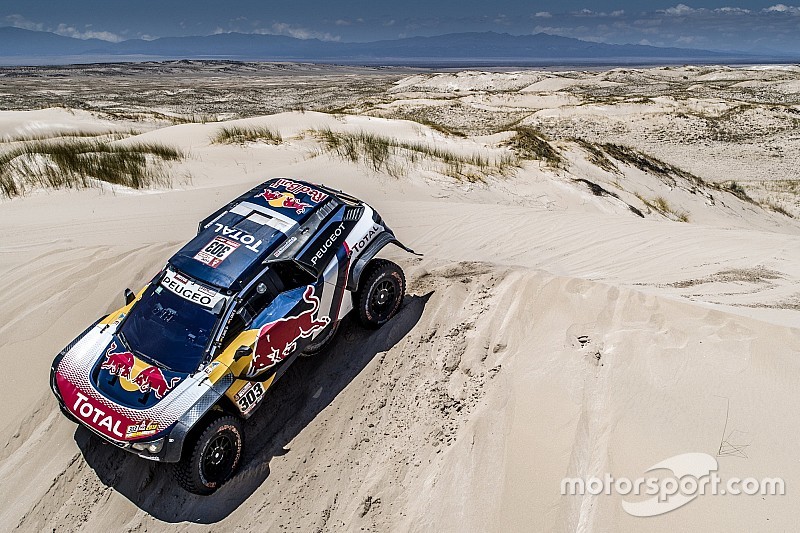 Koolen had lodged a complaint to Dakar in the aftermath of the La Paz – Uyuni stage, alleging that he was hit by the Peugeot and that Sainz did not stop to assist him following the contact.

The two-time World Rally champion was subsequently assessed a 10-minute penalty for "potentially dangerous" conduct, but the sanction appeased neither side – with Sainz saying the penalty left him "disgusted", and Koolen feeling it was not severe enough and threatening criminal action.

On Tuesday night, Peugeot – after calling the decision "incomprehensible" and vowing to appeal – provided the Dakar stewards with telemetry from Sainz's 3008DKR Maxi and other relevant information.

This prompted the cancellation of the penalty and the issuing of "a formal advice to crew #303 [Sainz/Lucas Cruz] to take extra care while overtaking other competitors".

"The telemetry does not show any crashes," said Peugeot Sport boss Bruno Famin. "Maybe a brush, but nothing like an impact. The accelerometer didn't register it, just as Carlos hadn't.

"In the telemetry you can see Carlos follows the quad during 12 seconds at 50km/h and when the quad loses control, he brakes again to 37km/h.

"It is clear that Carlos braked hard and turned the steering wheel sharply to avoid the quad.

"I've read some statements from the quad rider. I think Carlos' behaviour in this incident was perfect and the quad rider should thank Carlos for having avoided him. These are the facts.

"It's a matter of common sense. We are very happy that the stewards analysed the facts and looked at the dossier again to reconsider their decision.

"We are happy that they cancelled the penalty, since two days ago they didn't have all the data to make the decision. They've done a good analysis."

With the penalty rescinded, Sainz now leads teammate Stephane Peterhansel by one hour and 45 seconds in the general classification.

Three more days of competition, featuring 1012 kilometres of timed running, currently separate the Spaniard from what would be his second Dakar win.