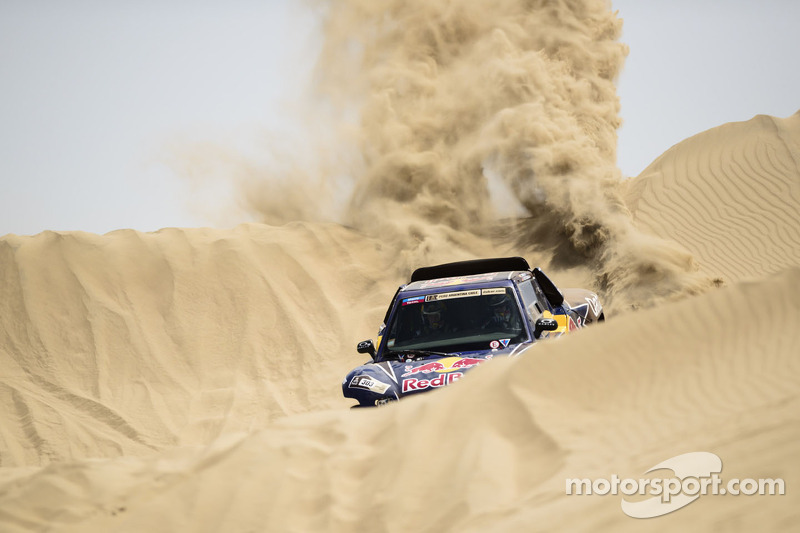 449 racing machines were scheduled to start in this year’s edition of the Dakar! The route for the opening stage in Peru was an easy one taking them from Lima to Pisco.

Stage one of the Dakar is what it normally termed a warm-up before they tackle the major sand dunes in Peru. However, it also is a sign of how well one tuned up their cars, bikes, quads and heavy trucks in preparation for the 2013 challenge. Today’s route was had a 250 km liaison section before the first special of only 13 km in the area along the coast line of the Pacific Ocean of Peru near Pisco.

The Bike category was first to leave Lima and the honor of being the first competitor to start this morning was Chilean rider César Zumarán on his Yamaha. Yet, it did not take long for the defending 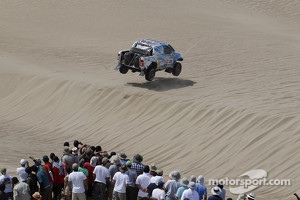 The surprise of the day belongs to Carlos Sainz when the Spaniard took the first stage win and the early lead for the Car classification for the Qatar Red Bull Rally Team with a time of 7′40″ for his 25th Dakar stage victory. It is his first time racing a Buggy, but his long-time co-pilot Timo Gottschalk returned with Sainz. This year Sainz is partnered with his former rival Nasser Al-Attiyah. Argentinean Lucio Alvarez was second today in his Hilux Toyota just eight seconds behind Sainz. In a Buggy SMG, French star Guerlain Chicherit was third followed by Al-Attiyah.

“This stage was just a short prologue, about 13 kilometers long. It was just a warm-up. Things get serious tomorrow,” said Sainz.

The highest placing X-raid Mini was Krzysztof Holowczyc in sixth as they appeared to just cruise on the short stage. American Robby Gordon and navigator Kellon Walch made the news right after he left the starting gate. His Hummer was stopped just 4 km into the special when Gordon got stuck in the sand, breaking the transmission.

It cost them around nine minutes and Gordon explained, "I stopped at the top of a dune after Kellon told me to be careful since we could not see the other side, and I was being super conservative. We got stuck and lost the transmission trying to get out. We literally had to push the HUMMER out of the sand. I am down more than I ever was last year on day one, and I cannot believe it. We are in bad shape but from here on out we will just have to fight, fight, fight!"

For the Mini team, Stephane Peterhansel commented: "The special was quite fun, with nice dunes and high speeds, but it wasn't easy because it's been a few months since the last time we drove a race car, so we need two or three days to get used to all this again. We hit the brakes for no good reason at the top of the dunes quite a lot, which cost us some time. We're going to ease into the rally..." 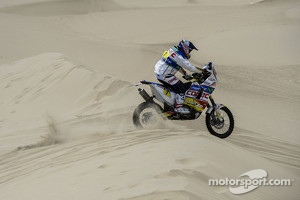 In the Bike category, KTM rider Francisco Lopez held on to take the win with a time of seven minutes and 51 seconds – last year, he started 2012 with victory in stage 1 – this year he rides for the Chilean Tamarugal team. By a margin of one second, ‘Chaleco’ holds the early lead over Frans Verhoeven. The Dutch rider is on his fourth different motorbike in his fifth year of contesting the Dakar in South America – this time on a Yamaha. Third went to Honda rider Pablo Quintanilla from Chile, and he was followed by another Chilean, Patricio Cabrera on a Kawasaki.

On his win, Lopez said, "It was a bit difficult this morning. I was a bit sleepy during the link section. But the Dakar started with this special and the motorcycle woke up. Just like the rider. It turned out to be a fast section. I did well but I took it calmly. Tomorrow is quite different, we'll see."

Slotting fifth was Cyril Despres on his KTM. The French ace is only 13 seconds adrift and still expected to be the overall victor. He commented: "Things went well for me, as is always the case when I'm on my motorcycle with the Dakar stickers and, most importantly, race number 1! It was a short special, but you still need to be on the lookout at all times, and it was a good warm-up. I didn't pull out all the stops because it's not like the Dakar will be decided today, but strategy is as important a factor in this race as mechanics, navigational skills and physical condition, so with experience you learn how to make the most of strategy."

For the Quad classification, the local crowds cheered as Ignacio Flores Seminario took the first stage victory with a time of 9’22″. The Peruvian had his Yamaha Raptor 700R ahead of Netherlands' Sebastian Husseini by 11 seconds.

"It goes without saying that I didn't expect to win this," said Seminario. "But I don't want to make any mistakes. I've got to take things calmly. I'm not here to win the Dakar or achieve a top result. I'm here to finish the rally and make it to Santiago. I didn't manage to do it last year. And it's still my main goal. Today, this land I love has given me a beautiful win. This victory is for all of Peru, of course, but I can't overstate the importance of taking things calmly and patiently... There are still 14 days of racing to go." 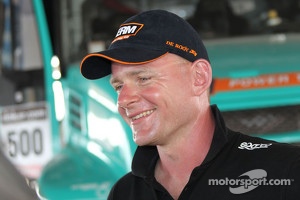 Gerard De Rooy, the 2012 Dakar legend, wasted no time to place his Iveco on top of the early Truck classification. To add to the first stage win was his teammate, Hans Stacey in second. De Rooy said, "It was quite a straightforward special but we attacked nevertheless. There were two dunes which we had to tackle twice, but the rest went quite well. You know, the 3x coefficient can make this short special hazardous, because any mistakes you make are also multiplied by 3, so we didn't push our limits, but everything went well. Nothing to report..."