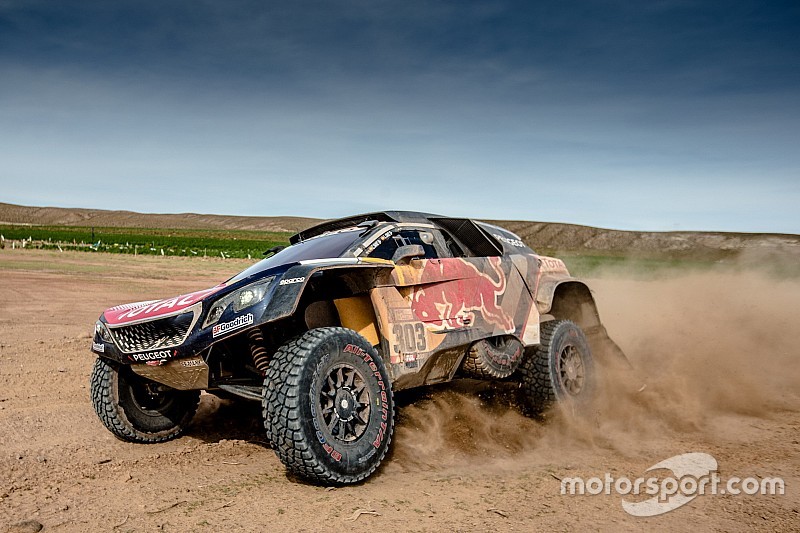 Carlos Sainz says he is "disappointed and disgusted" by the 10-minute penalty he was handed for an alleged collision with a quad during Saturday's Dakar stage.

The Peugeot driver came under fire from stewards after quad competitor Kees Koolen lodged a formal complaint claiming he was struck by Sainz's buggy during the La Paz – Uyuni stage.

The rally leader was hit with a 10-minute penalty for the incident, a decision that has left him fuming.

While admitting there was a close call with Koolen, Sainz is maintaining that there was no contact, and says he's "disgusted" by the decision from rally control.

"It was very unfair because I really did not have any incident, I did not touch him, thank God," said Sainz. "I am very disappointed and disgusted, but I will not let it influence me.

"I'm so sorry for him, for the scare he got. I also had a big scare because it was very close.

"But from there to 10 minutes... Why? Why 10 minutes? Why not one? Why not an hour? I have not touched anyone, the car does not have any [mark] or his quad either."

Sainz detailed his side of the story, explaining that he feels he helped avoid a serious accident when Koolen lost control of his bike.

"I think I actually saved an accident," he added. "I feel sorry for the guy. I put the sentinel [on], he turned around and looked at me. He moved outside; the road was full of mud. It was a huge place, plenty of space.

"At the moment he crossed over the side of the road he lost control and the quad came back onto the road.

"I managed to save the accident, I must have passed every close, that's true, but I never hit him.

"I think the guy finished the stage 12th. If I hit him, it would be much sadder news."

When asked why he didn't stop, Sainz reiterated that there was no contact, hence no reason to stop.

"I never thought it was a problem, I just passed close. Of course if you hit somebody, you stop. I never hit anything."

Despite the penalty, Sainz continues to lead the Dakar by 56m37s over Toyota driver Nasser Al-Attiyah.

Peugeot Sport has officially confirmed its intention to appeal the penalty, described by team boss Bruno Famin as "incomprehensible".