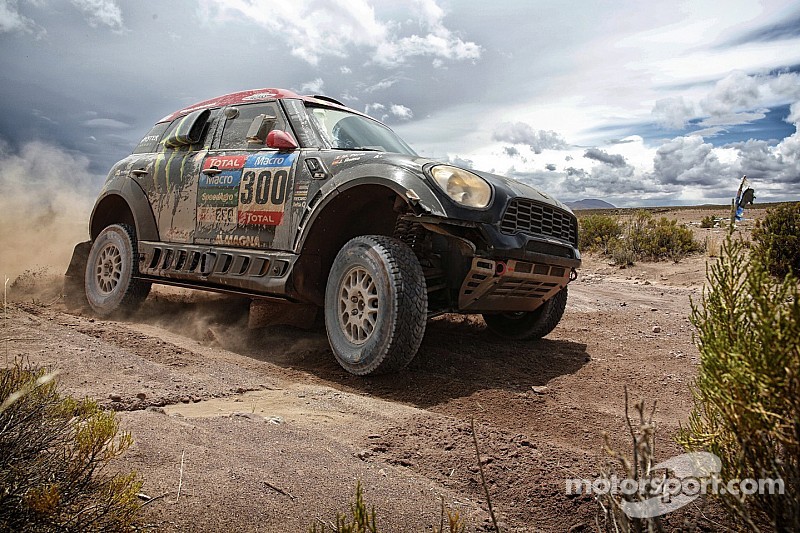 The defending event winner is not giving up on this year's Dakar.

Munich (DE). MINI is continuing to show a dominant pace at the 2015 Dakar Rally. Joan “Nani” Roma and his co-driver Michel Périn, the 2014 Dakar Champions, have won stage nine at the Dakar claiming their first stage win at this year’s event. The MINI ALL4 Racing has won eight out of nine stages at the 2015 Dakar Rally so far.
Roma/Périn, who had achieved two stage podiums and five top ten positions after a difficult start into the event, showed great navigation skills on the 451 kilometre-long leg finishing 6:27 minutes ahead of the rest of the field.

It was an all MINI podium on day eleven at the Dakar: Nasser Al-Attiyah/Mathieu Baumel (QT/FR) posted the second fastest time on Tuesday, Vladimir Vasilyev/Konstantin Zhiltsov (RU/RU) in another MINI ALL4 Racing followed in a strong third place.

Al-Attiyah/Baumel extended their lead in the overall classification by almost 16 minutes. They are now 23:58 minutes ahead of their closest opponents De Villiers/Von Zitzewitz, who were almost 22 minutes behind today.

On leg nine from Iquique (CL) to Calama (CL) the drivers had to tackle some high and very challenging dunes again. Later they had to master bumpy mountain roads with very loose gravel and a lot of potholes. The tricky terrain was extremely hard on the tires. Thus a lot of drivers had to change their damaged wheels during the day.

Six MINI ALL4 Racing finished within the top ten on Tuesday. Krzysztof Holowczyc/Xavier Panseri (PL/FR) were in sixth followed by Orlando Terranova/Bernardo Graue (AR/AR). Erik van Loon/Wouter Rosegaar (NL/NL) in the MINI ALL4 Racing crossed the line in ninth place moving up one position in the overall classification. The Dutch duo is now in fifth, one position behind Holowczyc/Panseri.
Mini

Ninth stage of Dakar a day of redemption for some